The Naked Hills tells of two partners (David Wayne and Denver Pyle) who become forty-niners. One, Bert (Pyle, who also has a narrative voiceover) will see reason and become a successful storekeeper while the other, Tracy (Wayne) gets a bad case of gold fever and wastes his life forever trying and failing to strike it rich. Denver offers the sage if a tad ungrammatical opinion that "A man don't need no mountain to live out his life happy."

The picture was directed, produced and written by Josef Shaftel, so there aren’t many others to praise or blame. Shaftel was also co-producer of a much better picture, another Naked one, The Naked Dawn (1955) with an excellent Arthur Kennedy. Bogdanovich thought The Naked Dawn was a classic and its director, Edgar Ulmer, a great talent. The Naked Hills, however, is weaker, partly because Wayne, in the lead, had little of the charisma of Kennedy and in the gold fever scenes falls into overacting. 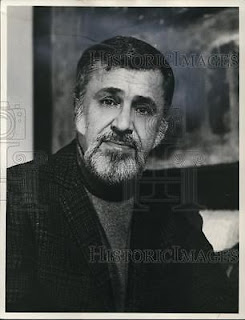 Brian Garfield called it “an oversimplified vest-pocket movie - a saga on a ‘B’ budget – and the greed-for-gold theme is threadbare” and I think he had a point.

There are also pantomime villains, in the shape of the dastardly banker Haver (Jim Backus) and his thuggish henchman Wilkins (Kennan Wynn). Mind, there were plenty of bad bankers with henchmen in other movies, and we don't hold that agin 'em.

The most entertaining presence was probably that of third-billed James Barton, who also sings the ballad under the opening credits, as the amusing old-timer Jimmo. He certainly makes the most of his part. 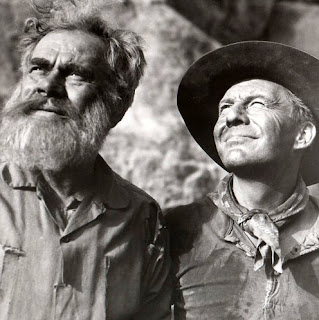 There’s some love interest in the curvaceous shape of Julie (Marcia Henderson) but she overacts too. 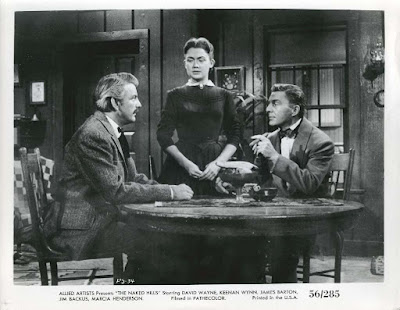 All a bit static

Fuzzy Knight had a blink-and-you’ll-miss-him role as a conman salesman and you might (or might not) also spot Paul E Burns and Kermit Maynard in bit-parts.

It is a (very) poor man’s The Treasure of the Sierra Madre in some ways, with Wayne as Bogart and Barton in the Huston part. But it didn’t have anything like the writing, directing and acting of that great movie, or the production values either. It has its moments and is not a total dud but I wouldn’t pine away if you never get to see it.