Not a nice man

The First Fast Draw was a Louis L’Amour novel that was published in 1959, coming between Radigan and Taggart. In my opinion it was not one of L’Amour’s best, for three main reasons: firstly because the hero is a less than savory character; secondly because of the preposterous basic plot that the hero invented the whole quick-on-the-draw hoohah; and lastly because it’s told in the first person. 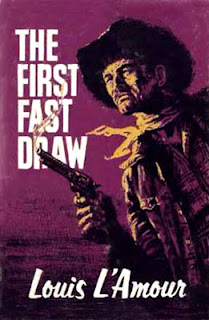 Western novels do really depend on a central character with those ‘Western’ virtues of toughness, taciturnity and survival skills. A Western hero has to be resourceful but modest, has to be really good with fists and/or guns but say little about it. He (it’s always a he) also has to be decent, and follow the Western code of honor. It’s not easy when recounting the action from the point of view of ‘I’, to bring those skills and character traits out without the fellow appearing to boast. And if you are going to make that ‘I’ someone like the Texas reprobate Cullen Baker, it’s harder still.

Cullen Montgomery Baker (1835 – 1869) was Tennessee-born but operated after the Civil War in northeast Texas and southwestern Arkansas. Like his contemporaries such as Bill Longley and John Wesley Hardin (and Longley figures in the story) Baker was notorious for fighting in saloon brawls and his fiery temper, resorting willingly to firearms and perfectly happy to gain any advantage going, no matter how ‘unfair’ or ‘unsporting’. It is impossible to know how many men he killed but it was a very considerable number. 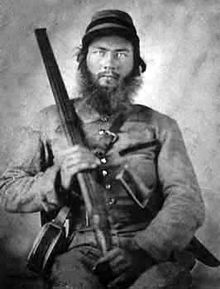 A picture often said to be Cullen Baker but almost certainly not.
At least he holds the favored Baker weapon.

One newspaper called Baker "the Arkansas brigand" and “the most feared gunman in the Lone Star State who had spread a reign of terror in Texas." The Athens Post referred to Baker as a “notorious guerrilla, of Red River notoriety”.

Baker started young. At the age of 18, while out drinking with friends, he became involved in a verbal altercation with a youth, grabbed a whip, and beat the boy nearly to death. He then shot a witness to this crime in the legs with a shotgun and left him lying in front of his house, where he died a few days later.

Baker fled to Arkansas where a local woman berated him. He took several hickory switches to her house and threatened to beat her. When her husband protested Baker stabbed him to death.

Baker joined the CSA during the Civil War and according to The Memphis Daily Appeal “he shot and killed at least three African Americans, killing a black woman in an immigrant train and later shooting a black boy six times with a pistol after taking the Oath of Allegiance and becoming an overseer of Freemen.”

By 1864 he had either been discharged or had deserted, and he joined the notorious ‘Independent Rangers’, supposed to pursue and capture deserters from the Confederate Army but in reality taking more time over murder, rape, theft and extortion.

With much of Arkansas under the control of the Union army, often using African-American troopers, Baker was enraged. Near the end of 1864 in a saloon in Spanish Bluffs, Baker shot and killed three soldiers and a sergeant.

After the war Baker joined forces with outlaw Lee Rames, and the gang of desperados killed and looted. Baker’s favored modus operandi was to shoot from ambush with a shotgun. 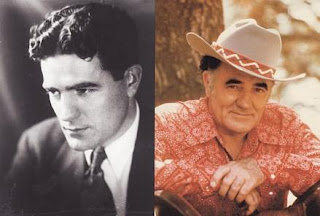 Louis had a good imagination

None of this occurs in L’Amour’s novel, of course. There, Baker is a put-upon man trying to farm his dead daddy’s land in peace but driven into the alligator-infested Caddo Lake area by unjust persecution. He has a few loyal friends but is not a gang leader.

It is at this time that he realizes the necessity for being ready to shoot to defend himself at a moment’s notice, and practices long and hard until he can pull a revolver (he doesn’t use a shotgun) with lightning speed, thus becoming “the first fast draw”. The quick-on-the-draw legend was of course to become a mainstay of pulp literature and Hollywood Western movies.

Cullen’s time of mayhem was in fact relatively and mercifully short. Eventually his homicidal wildness was too much even for Rames, and a split occurred, with all but one of the gang members, a certain Kirby, siding with Rames.

Cullen Baker was killed in January 1869 by one Thomas Orr, a schoolteacher, said to be romantically involved with Baker’s (inevitably estranged) wife, who  immediately cashed in with a book, Life of the Notorious Desperado, Cullen Baker, from His Childhood to His Death, with a Full Account of All the Murders He Committed. 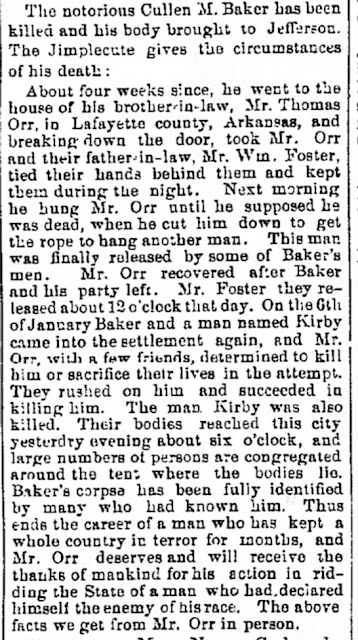 The papers loved it

A newspaper at the time recounted:


Texas outlaw Cullen Baker was killed by a schoolteacher named Orr who had married Bakers ex-wife. Baker had once hung Orr but cut him down too soon in order to save his rope. Orr, with three others, followed Baker and an accomplice to a hideout in southeastern Arkansas, coming upon the two men just as they were squatting next to a fire, having lunch. Orr and the others did not call out to the outlaws to surrender, knowing what their answer would be. The teacher and his companions rode down on Baker and his henchman with their six-guns blazing, shooting both men dead on the spot. Orr found that his old adversary was a walking arsenal. Strapped to his side was a double-barreled shotgun. Baker was also wearing four six -guns, three derringers, and six knives. Also found on Baker's corpse was a carefully kept packet of newspaper clippings.

L’Amour won’t have this, though. In his story Baker generously gives a man in rags one of his distinctive shirts, and it is this man whom Orr kills and who is taken for Baker. Baker finds it convenient to be ‘dead’ and so does not disabuse the world of his reported demise. He goes out West with his lady love. Believe that if you will. Actually, L'Amour was fond of Baker and the character appears in other books by him too, such as Lando.

Of course with all outlaws there are escape stories. Billy the Kid got away from Fort Sumner, Jesse James escaped the assassination at the hands of the Fords, and so on. 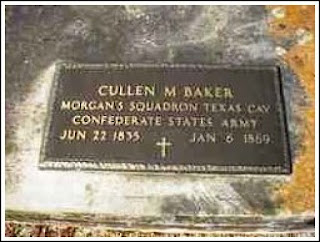 Equally predictably, Baker was elevated to Robin Hood status. He was a noble defender of the rights of the poor and downtrodden against political and corporate exploiters. Jesse James would get the same treatment. This was exacerbated in Baker’s case by the fact that some of the authorities he rebelled against were Reconstruction ones, and as we know, in much of white Texas – and indeed in Western movies and novels – Reconstruction was all bad, with no saving graces. It was all about corrupt Northern carpetbaggers unjustly favoring “uppity nigras” at the expense of decent white folk, and there was nothing positive about the system at all.

Still today Baker has his defenders, especially in Texas. A recent biography of him (2018) bears the title The Robin Hood of Caddo Lake. The town of Bloomburg, Texas commemorates Baker with the annual Cullen Baker Country Fair, held the first weekend in November - proceeds to the Bloomburg Volunteer Fire Department. 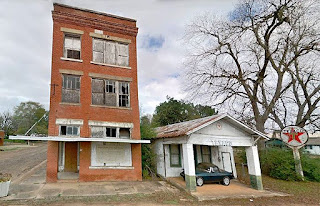 Bloomburg (I don't think the MG was original)

Baker hasn’t appeared much in Western movies or TV shows, perhaps surprisingly. There was a Mexican spaghetti, La Mula de Cullen Baker, with Rodolfo de Anda as Baker, in 1971. You’d think at least that detective Matt Clark would have captured him on Stories of the Century, yet nay. Do please leave a comment if you know of any other Bakers on the big or small screen.

But I’d skip the Louis L’Amour one if I were you. 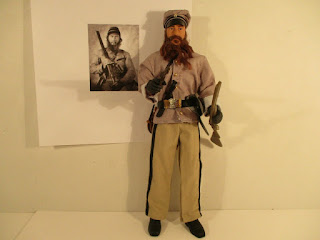 What about a figurine?