A common scene in Westerns was a shooting lesson. Often it is the hero who teaches a young neophyte how to handle a gun. I suppose that the shootin’ iron was so intrinsic to the Western and such a vital part of the Westerner’s equipment that learning how to use it was a rite of passage. Freud would probably have had something to say about it too, had he been a fan of the Western movie. (Perhaps he was, who knows?)

In Shane (1953), professional gunman Shane (at least we assume he is a professional gunman) sees that young Joey (Brandon De Wilde), the son of the farmers he is helping, is fascinated with guns, and practices all day with a wooden one. He teaches the lad how to shoot. The boy is a bit young to be learning that (De Wilde was ten but seemed quite a bit younger), and his mother doesn’t care for it at all. She tells Shane, “Guns aren't going to be my boy's life.” And when Shane answers that “a gun is a tool, no better or worse than any other tool, an axe, a shovel, or anything. A gun is as good or as bad as the man using it,” Marian replies, “We'd all be better off if there wasn't a single gun in this valley, including yours.” But I don’t think you would have convinced Joey of that. 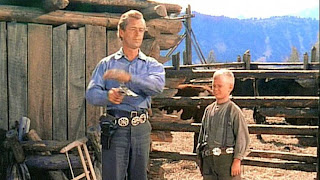 Actually, the scene was close to a disaster because Alan Ladd, as Shane, was far from proficient, despite instruction (an off-screen shooting lesson) from expert Rodd Redwing. They had to do 119 takes, which must have tried even the perfectionist director’s patience.

Lee Aaker, the Rin Tin Tin boy who also did quite a few feature Westerns, played Robert Mitchum’s son in River of No Return (1954), when he was eleven. For this young lad, gun skills are a basic requirement for survival. He, his dad and Marilyn Monroe have to stand on a raft in a studio in front of a back-projection screen while props men rock the raft, shoot arrows into the wood and throw buckets of water over them. Dangerous work. 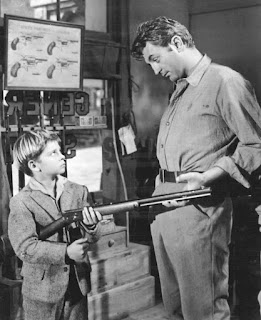 Donald MacDonald, the kid who played Burt Lancaster’s son in The Kentuckian in 1955, became Robert Stack’s adopted son the following year (Robert shot his dad dead in a gunfight and so felt obliged to look after the boy) in Great Day in the Morning (review up next). The lad got two step-moms, in the curvaceous shape of Virginia Mayo and Ruth Roman, so it wasn’t that raw a deal. Anyway, Stack felt obliged to teach the stripling how to shoot, you know how they do, and shooting at thrown-up bottles and at a tree, to group the shots, are part of the lesson. It’s 1861 and the revolver is almost as big as the boy, but he manages. 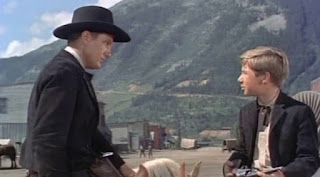 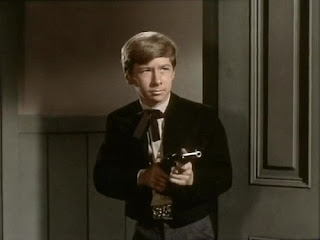 ...and it comes in handy

Another young student was Gillom Rogers (Ron Howard), slightly older than Brandon, Lee or Donald but not by much, in The Shootist (1976). Gillom had a great tutor: John Wayne, no less, as aging (and dying) gunman JB Books. Gillom clearly idolizes gunfighters, though he is a bit disappointed that the notorious Books is now so old and broken down. The boy nags Books into giving him a shooting lesson – though in fact he isn’t half bad already. They too shoot at trees, birches, I think, and Gillom groups his shots pretty durn well. But Books tells him it isn’t only accuracy, it’s willingness to shoot a man. “Most men will blink an eye, draw a breath, before they pull a trigger. I won’t.” 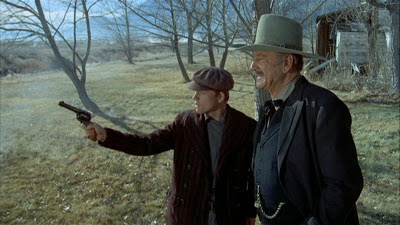 The source novel, by Glendon Swarthout, and movie diverge somewhat, as to Gillom’s future with a gun, which you will see if you read the book and watch the film.

Young Max Sand (Steve McQueen), out to avenge his murdered family, comes across gunsmith Jonas Cord (Brian Keith) in Nevada Smith (1966). Actually, at 36, McQueen was a tad long in the tooth to be playing a teenage boy, but never mind. He grew into it. Max too proves to be a quick learner, and the skills with a pistol that he masters from Cord will come in handy on his revenge quest. Cord even provides him with a good gun, a replacement for the rusty wreck he had. 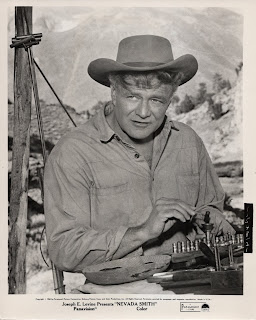 Keith is the gunsmith… 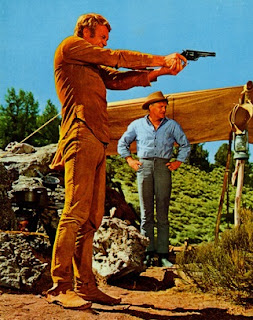 ...who teaches McQueen to shoot

Older than Steve, Ron, Lee or Brandon, but still a tyro as far as grizzled bounty-hunter Morg Hickman (Henry Fonda) was concerned, was Ben Owens (Anthony Perkins), the young sheriff in the Anthony Mann Western The Tin Star (1957). The lawman is being threatened by thuggish town gunman Bart Bogardus (Neville Brand) and must learn to shoot, and learn fast. Morg has him draw and shoot at twigs floating in the river. It doesn’t go well. Part of the trouble, according to Morg, is that he wears his holsters slung too low, and holster height is often mentioned in Western movie tutorials. Don’t worry, though. Ben is a quick learner. In fact, in the novel Warlock, author Oakley Hall describes how Clay Blaisedell teaches Deputy Gannon how to draw and shoot – and in the movie version Blaisedell was Fonda too, so there was a link there. Kinda. 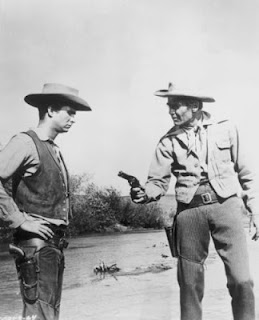 Clay Fletcher (John Payne) is full-grown when Don Nacho Vázquez (Eduardo Noriega) teaches him to shoot in El Paso (1949) but he’s an Easterner, so is still a child where it counts – in the ways of the West. Another quick student, Clay learns by shooting at, er, clay plates, thrown up by a servant. But Don Nacho concentrates on speed. Accuracy is not enough. You have to be able to draw your guns in the blink of an eye. 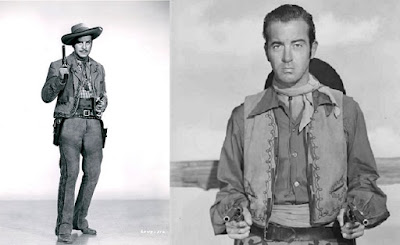 Noriega teaches Payne - all too well

Kirk Douglas agrees. In Man Without a Star (1955) Dempsey Rae (Douglas) shows off to the young Jeff (William Campbell) by twirling his gun fancily, and the boy really wants to learn that. But Kirk tells him no, “Twirling a gun never saved a man’s life.” And he adds, “There’s only one thing you gotta learn. Get it out fast, and then put it away slow.” 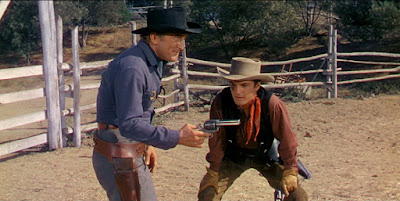 Speed is of the essence

Other professors have a different take on it. Speed is no good if you miss. Take your time. Aim. That’s what Morg told Sheriff Ben.

Of course it isn’t only a lesson, taught and learnt. It’s a male-bonding session too. In AMC TV’s Hell on Wheels (2011+), Episode 7, Revelations, we see the hero Bohannon (Anson Mount) beginning to bond with Ferguson; he gives the railroad worker a shooting lesson. Bohannon goes for the slow-and-steady approach, like Morg. “Take your time. Count your rounds as you fire. If you’re calm, you can count their rounds too.” This advice is taken to heart.

Sometimes a whole group of inexpert gun-handlers has to be taught. Think of the mercenaries teaching those Mexican peasants how to shoot in The Magnificent Seven (1960). Charles Bronson does the old “squeeze, don’t pull” line – it’s often the only thing teachers can think of to say. You may remember, these peasants are not quite the quick students the ones above are. In fact Chuck finally tells one to just use the rifle as a club.

Of course Yul's shooting lesson to Chico in the cantina in the first reel didn't go so well.

Still, Mexican peasants or young Americans, the relationship is the same. Older pro rather patronizingly passes on his skills to a new generation.

Occasionally, though, this was turned on its head, and it was a woman who taught a man. CBS’s TV movie Belle Starr (1980) opens with Belle (Elizabeth Montgomery) giving her young son Ed (David Knell) a shooting lesson – she too goes for the “Squeeze, don’t pull” chestnut. In Little Big Man (1970), Jack Crabb (Dustin Hoffmann) is taught by his Calamity Jane-ish sister Caroline (Carole Androsky). A key notion is going all slitty-eyed. It works because Jack becomes a lightning-fast gunslinger. 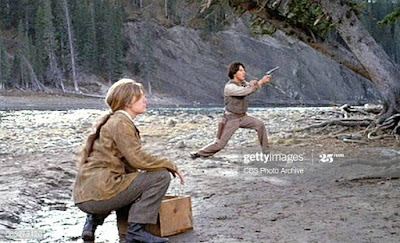 Best of all, posh English lawman Kenneth More in The Sheriff of Fractured Jaw (1958) has Jayne Mansfield as a tutor.

He gets distracted during the tutorial

More usually, however, it’s the man doing the teaching. Even in recent so-called feminist Westerns like Jane Got a Gun (2015) Jane (Natalie Portman) needs a man to teach her how to shoot the gun she got. 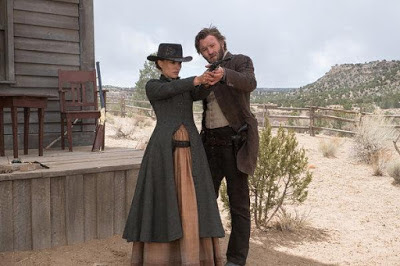 And a lustrum before that, in 6 Guns (2010), Selina (Sage Mears) was brutally treated by some vile men, became the town drunk but was then rehabilitated and taught to shoot (by a man, natch) so that she might get her revenge. She became a bounty huntress. 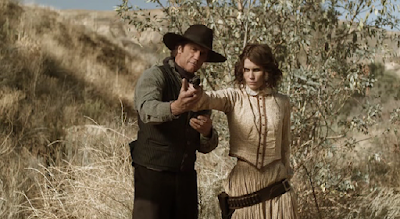 Women had been taught to shoot so that they could get revenge before Selina and Jane, and one thinks especially of Hannie Caulder (Raquel Welch) in 1971. Robert Culp taught her. 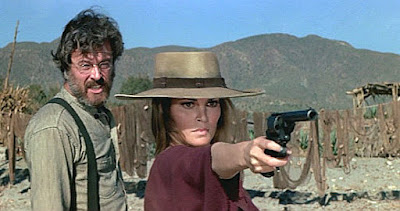 She got the hang of it pretty fast

Even Rachel (Loretta Young) had learned to shoot in Rachel and the Stranger (1948). That wasn’t revenge, though: with Injuns on the warpath it was a matter of survival. 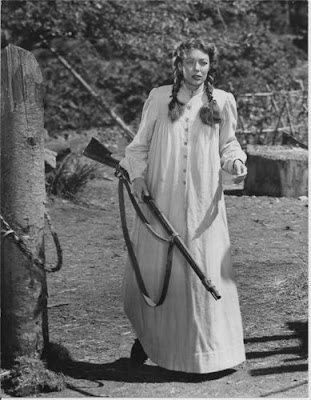 Sometimes groups of women were taught how to manage firearms. Robert Taylor did it in Westward the Women (1951) and Audie Murphy did it in The Guns of Fort Petticoat (1957). More patriarchal authority figures but hey, it was the West, right? 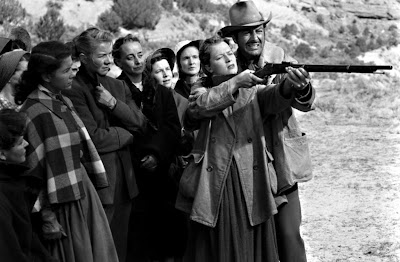 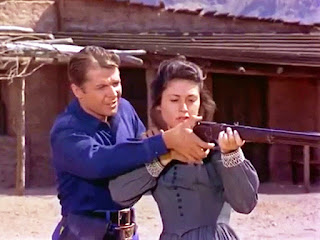 So does Audie
I'll end with perhaps the bizarrest of shooting lessons. In the (actually rather good) Embassy Pictures Western of 1966 An Eye for an Eye, villain Slim Pickens, in a shoot-out in a box canyon, manages to cripple hero Robert Lansing’s gun hand and blind co-hero Pat Wayne. So the two gunmen become a team, using Lansing’s eyes and Wayne’s gun. Lansing teaches Wayne to shoot blind. If this sounds silly, it isn’t; director, actors and writers manage to get it to work, and it leads to a tense final showdown.