Bank robberies are an essential ingredient of the Western movie genre. They might be large set-pieces such as the raid on the First National Bank in Northfield, Minnesota, in many a Jesse James flick - see, for example, the opening of The True Story of Jesse James (1957) - or Peckinpah’s spectacular and bloody first scenes of The Wild Bunch (1969). They might be elaborately planned and daring robberies, borrowing much from the heist movie. Or they might be smaller affairs with cowboys walking into a bank almost casually and ordering the teller to reach for the sky. There are in fact so many bank robberies in Westerns that I cannot hope to mention them all here, nor would you want me to, I am sure, because it would just become a boring and very long list. And yet the curious thing is that bank robberies hardly ever happened west of the Mississippi in the second half of the nineteenth century, the setting of most Westerns. In 1991 Larry Schweikart and Lynne Doti published a detailed study which included every state west of the Missouri/Minnesota/Texas line, specifically, Arizona, California, Colorado, the Dakotas, Kansas, Idaho, Nebraska, Nevada, New Mexico, Oklahoma, Oregon, Utah, Washington, and Wyoming, between 1859 and 1900. There were a few famous bank robberies in these places and at this time, such as those of the James-Younger gang or Butch Cassidy & Co, but you could almost number them on the fingers of one hand – two at the most. “The record is shockingly clear: there are more bank robberies in modern-day Dayton, Ohio, in a year than there were in the entire Old West in a decade, perhaps in the entire frontier period!” 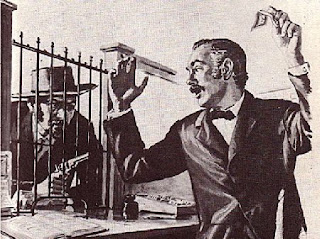 Sadly, it didn't happen. Or not often.

Schweikart goes on: “Several gunslingers marching headlong into a bank may have seemed like a good idea to some, and certainly Butch Cassidy’s gang pulled off the successful Telluride robbery in such a mode. His gang had the advantage of Cassidy’s brilliant planning: a shrewd evaluator of horse flesh, Cassidy had stationed (Pony Express-style) horses at exactly the points where he knew his own horses would be wearing out, ensuring that his gang had fresh mounts all the way to their hideout. Even so, one has to search extensively to find bank robberies of even this type. There was one in Nogales, one in California, and perhaps a couple in other locations. But like the rear-wall blasting, the front-door robbery is notoriously absent in western records.”

Never mind, Western movies made up for this disappointing shortfall.

Right back in the early days Westerns decided to make the most of those few bank robberies that actually happened. The success of Edison’s The Great Train Robbery in 1903 spawned many imitations, such as The Great Bank Robbery and The Bold Bank Robbery, and there was even Edison’s The Little Bank Robbery (1906) in which children took the parts and the bandits steal toys and candy. In 1908 Oklahoma outlaw Al Jennings made The Bank Robbery, supposedly re-enacting an actual robbery he carried out. It shows how early bank robberies became fixed in the ‘psyche’ of the American Western. 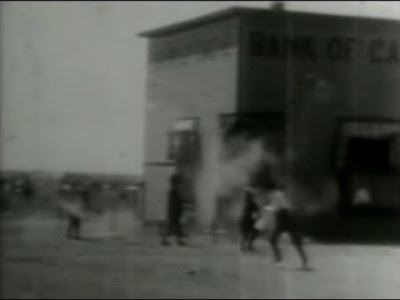 Some of my favorite bank robberies are, just for example, the ones in The Moonlighter (1953), The Last Outlaw (1993) and The Bushwhackers (1951). Why? Simple. Although most of The Moonlighter is a rather torrid (though turgid) romance between Fred MacMurray and Barbara Stanwyck (yawn), there’s a good bit where Fred and Ward Bond plan a heist on the bank where Fred’s brother Tom (William Ching) works, and it doesn’t go well: Tom is killed with the bank president’s derringer. Fred sees his bro laid out with the banker's derringer

In The Last Outlaw the ruthless gang leader Graff (Mickey Rourke) discovers the derringer of the bank manager (Richard Fancy) and asks scornfully, “What the hell is this?” The thing is, this derringer is destined to play a key part in the last reel (if TV movies have reels). And the crooked banker in The Bushwhackers shoots the even eviler rancher woman with one of the pocket guns. This is the perfect user of a derringer, a slimeball using one against the perfect victim, because she really deserved it. Bankers were classic derringer users because they wore suits and were crooks. The 2005 Eurowestern Bandidas was pretty dire but the best thing about it was Dwight Yoakam as the insanely evil banker who uses, yes, a derringer. I think all bankers were probably issued with them as standard equipment when they took up the job. 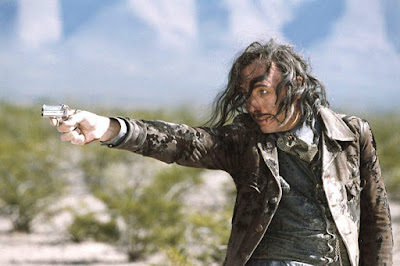 And you can see how those (rather ho-hum) Westerns went up in my estimation. Bank robbery and derringer: they were in danger of over-egging the pudding.

Oo, wait, I have just remembered another bank/derringer Western. Remember in Gunfight at Comanche Creek (1963) when Audie Murphy robbed the bank with one? What? I hear you cry. Audie rob a bank? Never! He did, though. Mind, he was forced to, and they only gave him a puny derringer to do it with. Not only that, it wasn't even loaded!

But soft, is this a blogpost on bankers or derringers? Come on, Jeff. Get a grip.

Although I do not care much for One-Eyed Jacks (1961) as a Western (and still less for Marlon Brando as a Western actor) I do quite enjoy the way Brando robs the bank in that movie, sitting on the counter with a gun in one hand and a banana in the other (it’s a coin-toss as to which is the more Freudian). As Karl Malden (another bad Western actor but we’ll let that pass for today) urges him to hurry up, before the Federales arrive, he casually strolls over to a lady and roguishly scolds her for hiding her ring. 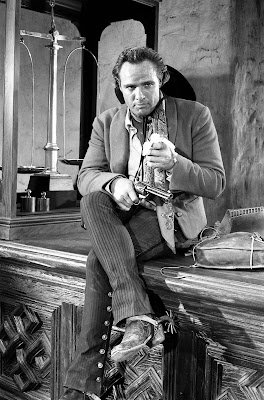 Brando robs the bank with a banana

You see, bank robberies are so commonplace in Westerns (you’d think they happened every day) that they need something to mark them out, such as a bit of humor.

Or maybe a darker vibe. In The Fiend who Walked the West (1958), a much better Western than the rather lurid title might suggest, but which borrows from the horror genre, after the fabulous introductory titles there’s a good night-time bank raid, with one of the robbers, Dan Hardy (Hugh O’Brian) being locked suffocatingly in the vault and thus later captured. It sticks in the memory, where those other hold-ups, the ones that happened every day, don’t.

A rather nice bank robbery, a very polite one, comes in that charming 1948 Western Four Faces West, when Joel McCrea needs a bank loan and makes a withdrawal with his .45 – though he is far too gentlemanly actually to fire it (in fact no gun is fired in the whole film, a rarity for a Western). And he eventually pays the money back. So maybe that doesn’t count as a bank robbery, I’m not sure. 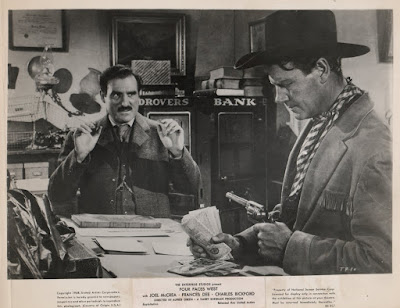 Joel holds up the banker - courteously

The thing is, banks were, in Westerns, ruthless capitalist institutions which had only profit, not the welfare of the Westerner, as their overriding motive. Bankers were smoothies who wore suits and, even worse, were often Easterners. If the Western as a whole may be said to have a coherent political ideology at all (a rather dubious proposition, I grant you) then it would be Populism. The resentment of Westerners to what many of them saw as the unjust and exploitative control of largely Eastern big business, railroads and banks was widespread in Western states and territories. That is why so many Western movies have as their villains rich ranchers, railroad bosses – and bankers.

One of the most emblematic of screen bankers is Gatewood (Berton Churchill) in Stagecoach (1939). He is aboard the coach because he is absconding with his bank’s profits (and deserting his wife), leaving his clients desperately in the lurch, no doubt. And he is cowardly and pompous as well. It’s actually a great performance by Churchill (he could be good as smarmy lawyer also, another loathsome Western stereotype) and we cheer when he gets his come-uppance. 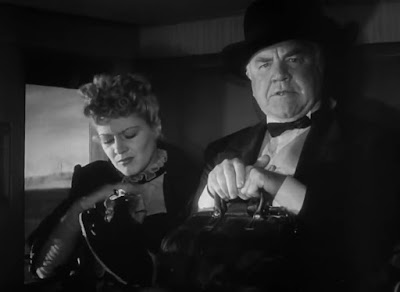 Banker Gatewood with prostitute Dallas. The disreputable one is on the right.

But other no-good varmints who are bankers abound. I especially like The Desperadoes (1943) with Glenn Ford, Claire Trevor and Randolph Scott. You see, there’s a scam going on. Smoothy banker Clanton (good old Porter Hall) – and we know that the name Clanton is alone enough to mark him out as a baddy – is in cahoots with rascally Uncle Willie McLeod (Edgar Buchanan, splendid as ever), resplendent in multi-colored vest (it was Columbia’s first color picture), who appears a harmless, cheery sort of chap but is actually, as I say, in a conspiracy with slimy banker Clanton. Their scheme is to pay some bank robbers led by Bernard Nedell (who is very good) to raid the bank, but they remove the cash first. They then pay out the poor account holders at 50¢ on the dollar, gaining their gratitude, and pocket the rest. Darned clever.

A Man Alone (1955) features Raymond Burr as crooked banker Stanley, with Lee Van Cleef as his henchman, an excellent combo, you will agree (Lee is also named Clanton). Stanley is a real slimeball. Pre-Perry Mason Burr had quite a good line in crooked Western men in suits, such as his lowdown lawyer Bristow in Station West in 1948 (and the female saloon owner slips him a derringer, classic derringer usage, but we better not go there again) and as the fancily-dressed crook in Horizons West (1952). They weren’t all bankers, those parts, but they could have been. 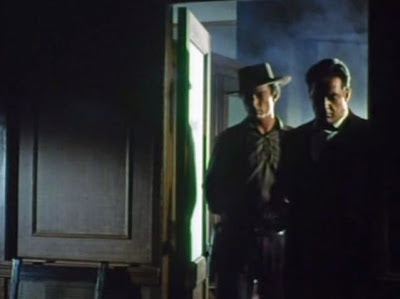 Many second-feature and series Westerns of the 1930s and 40s had the ‘hero helping to save honest homesteaders from crooked banker’ plot. It was a tried and trusted story.

Other crooked bankers include Calvin Drake (Harry Worth) in Adventuresof Red Ryder (1940), Rufus Bynum (Steve Brodie) in Sierra Baron (1958) and you will doubtless have your own favorite. They were legion. I could go on ad pretty well infinitum. But you wouldn't still be reading if I did.

In fact it’s hard to think of a good banker in a Western. I vaguely remember one but can’t recall which movie it was in. Perhaps you, dear e-reader, can remind me. He helps out decent farmers by extending them loans. But good bankers are mighty rare. Most of them take pleasure in demanding payment of promissory notes and foreclosing.

Bankers join judges, lawyers, saloon owners and railroad men as classic Western villains. So if their banks got robbed on a daily basis, good.