You can keep your hat on


In 1919 there came a major turning point in the development of the motion picture. Yup, you’ve guessed it, in that year Cecil B DeMille decided to show, in Male and Female, the big hit movie of that year, a bath scene. He had Gloria Swanson step into the tub. Don’t worry, it was all done very tastefully, with the maids lifting strategic towels at just the right (or wrong) moment. But it was very racy for the time, and the idea was soon taken up by many other directors. 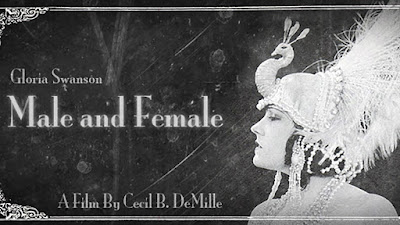 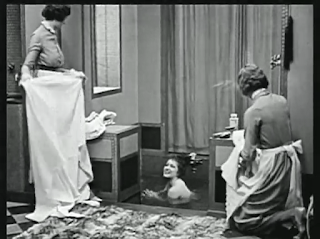 Nowhere more so than in the Western.

Have you ever noticed that no matter how dry the desert terrain, there always seems to be a handily placed pool for the heroine to bathe naked in? Funny, that. But again and again you’ll see a nubile beauty doff her apparel and drop into the convenient water. 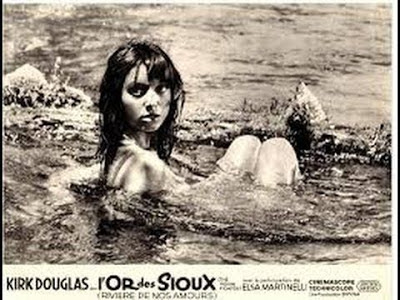 and is joined by the Indian fighter
Sometimes a man will come along and josh her, perhaps staying there and preventing her from emerging. Of course 1940s and 50s Westerns only showed her shoulders, and perhaps, rather daringly, some unclothed legs stepping in – see, for example, Robbers’ Roost (1955). Bare breasts and so on would have to wait till the 60s and 70s (e.g. Jenny Agutter in China 9, Liberty 37 in 1978). Still, though, the 40s and 50s scenes were quite titillating for them days. 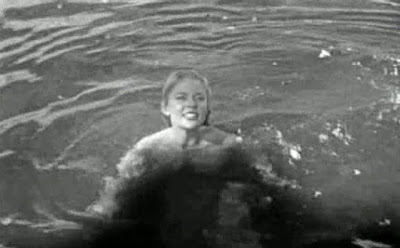 Peggie in The Yellow Tomahawk

In Flesh and the Spur (1956) we see more spurs than flesh but still Jon Agar spies a Havasupai maiden bathing in a pool and being assaulted by a lout, so he goes gallantly to the rescue. John Derek comes across Carolyn Craig bathing in Fury at Showdown (1957). In The Last of the Fast Guns (1958) Jock Mahoney spots Lorne Greene’s daughter Linda Cristal, bathing in a pool and he naughtily pinches one of her undergarments. We sense a romance looming. They wanted a scene like that in the dreadful turkey Mackenna’s Gold in 1969 but had to truck the water into the dry Canyon de Chelly. 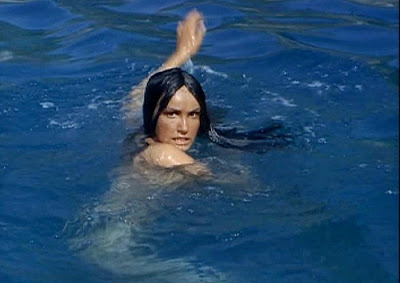 Mackenna's Gold - not a natural pool 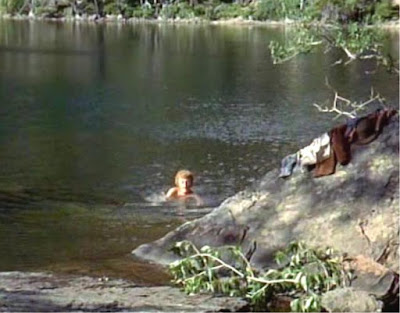 Even the Cattle Queen of Montana took a bath in 1954

In Five Bold Women (1960) you got both a gal bathing and bare legs. See saucy illustration:

And so the list goes on. There are countless other examples.

But what is unusual about the Western genre is how many men you see bathing. Occasionally, the pool scenario above was ‘ironically’ reversed. In Stranger on Horseback (1955) it’s Joel McCrea who is surprised skinny-dipping. In The King and Four Queens (1956) it’s Clark Gable. Well, if husbands in theaters were gazing at beauteous starlets on the screen and wishing that their wives next to them looked like that, for though they would never dare say so, the old girl was putting on a bit of weight these days, little did they know that said spouses themselves had Thinks bubbles above their heads indicating that Joel and Clark were aging a lot more attractively than the husbands next to them, and why couldn’t Clarence look like that with his shirt off? 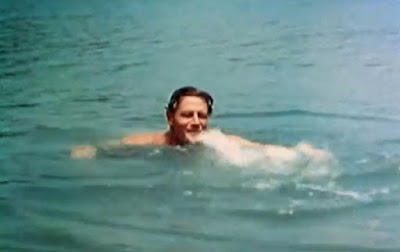 But it wasn’t usually a dip in a pool for the guys. It was the bathtub. How many male stars can you picture in the tub? Loads. It became a cliché. Or let’s call it a trope. The first one I can think of is the Cisco Kid in 1939. Pretty daring. 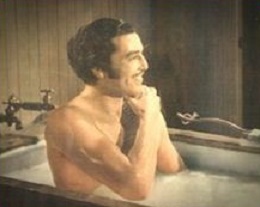 But from then on every other cowboy star was obliged to strip off and take a bath. Burt Lancaster in The Hallelujah Trail (1965), Jason Robards in The Ballad of Cable Hogue (1970), Lee Marvin in The Spikes Gang (1974), Guy Madison in Massacre River (1949) to name but a (very) few. It became a standard scene.

In the quite realist Western Will Penny (1968) cowpoke Will (Charlton Heston) boasts of his cleanliness, saying that he takes as many as eight or nine baths a year. And it is true that standards of personal hygiene out on the frontier were not quite what we expect today. You’d probably want to stay well upwind of any passing cowboy, and as for the average mountain man… In cattle drive Westerns the first thing the tired and dirty drovers want to do, even before hurrahing the town, is get a bath. Then it’s a beeline for the nearest saloon that takes Texans.

Once in the tub, naked and sometimes in quite a public place, the macho Westerner may feel somewhat vulnerable. That’s why again and again he keeps his hat on. Or chomps on a big cigar. It maintains his Western bona fides, you see. Sam Whiskey (1969) knew that. 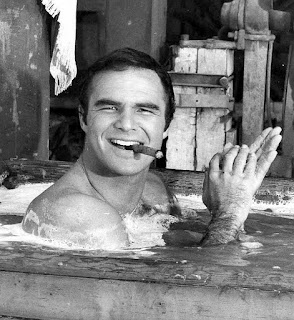 Not only hat and cigar. He might well need his six-shooter too. In The Good, the Bad and the Ugly (1966), Eli Wallach has his under the surface of the (rather sudsy) water. One wonders how well a Civil War revolver would have fired from there, but anyway. The scene was copied in Catlow in 1971.

It seemed to fire OK

Glenn Ford delights in shooting cockroaches from the tub in Cowboy (1958). In Big Jake (1971) the bad guys think they can get the drop on John Wayne because he’s in a shower-bath and has left his old yellow-handled .44 hanging on a peg with his clothes. Little do they know… It’s quite unusual to see a shower, though. Usually it’s an old-fashioned tub laboriously filled by pitcher. When the shower door swings open for Duke to shoot (for yes, he has another shootin’ iron in there with him) we glimpse that to save his modesty on the set he is wearing skin-colored tights. Phew, I say. 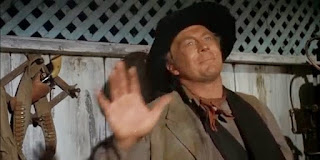 There's Duke's .44 hanging up, so the bad guy can shoot him in the shower, right? 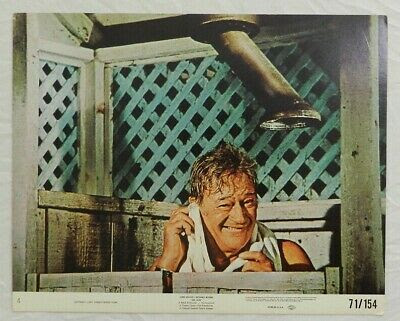 Occasionally, though, no tub is available. There can’t have been that many in the Wild West. Sometimes cowboys are reduced to using a horse trough. Sam Whiskey did that. So did Jock Mahoney in Joe Dakota (1957) and Dale Robertson in Dakota Incident (1956). It seems to have been a Dakota thing. Perhaps bathtubs hadn't arrived in Dakota yet.

Other receptacles were pressed into service. Barrels were popular. Think of Kirk Douglas and Henry Fonda in There Was a Crooked Man (1970). Chill Wills observes Calamity Jane cleaning up in a barrel in Young Guns of Texas (1962). 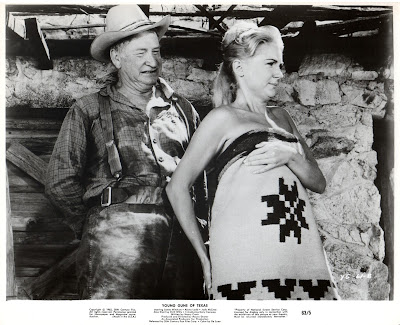 Chill approves as a cleaned-up Calamity emerges from the barrel


If no bathtub is available,improvise: 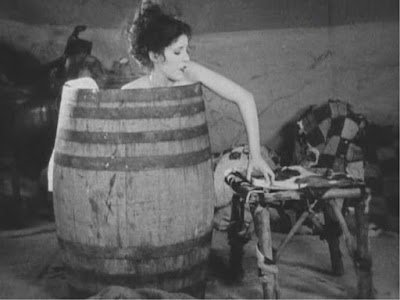 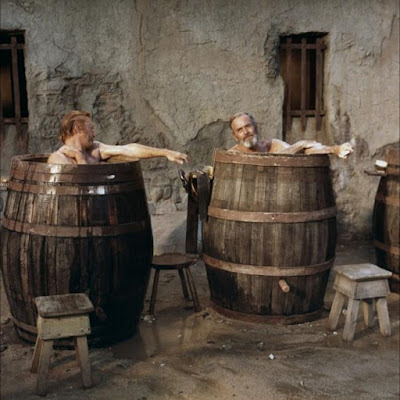 Now and then there was the fellowship of the bath. That famous scene with the two Mavericks, Mel Gibson and James Garner, in Maverick, for example, in 1994. It was copied in Shanghai Noon in 2000.

Mavericks relax side by side (with cigar, naturally)

In Cowboy, Glenn Ford’s bath stood alongside Jack Lemmon’s (he too learned to shoot cockroaches). 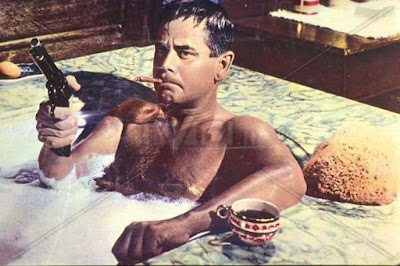 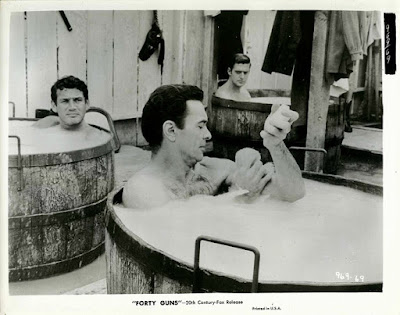 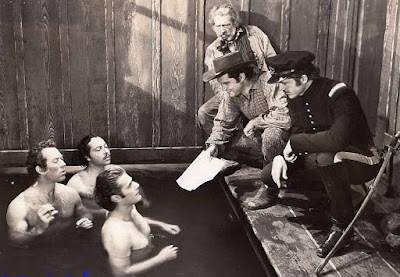 All in it together

The scene goes on too long in The Great Northfield Minnesota Raid (1972) - but then all the scenes do. In In a Valley of Violence (2016) the hero and his dog take baths alongside each other. It’s comradely. 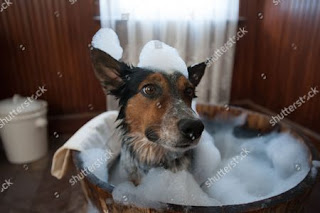 The mutt takes a bath too
(Shutterstock photo)

Ladies can take comradely baths together too, as in Pony Express (1953): 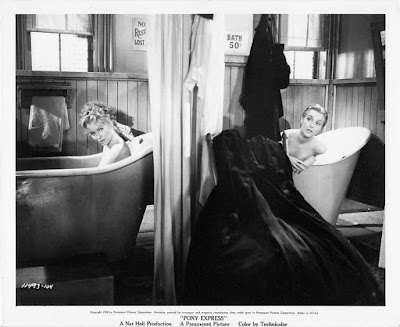 Sometimes men taking a bath are surprised by other men. Bob Ford rather creepily scrubs Jesse James’s back in I Shot Jesse James in 1949, while it’s Bob who is surprised in the tub in The Assassination of Jesse James by the Coward Robert Ford 58 years later. It's not usually a homoerotic episode, though. Western heroes are too macho for that. 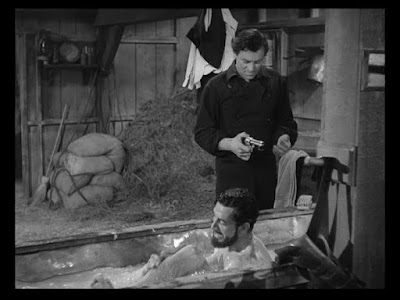 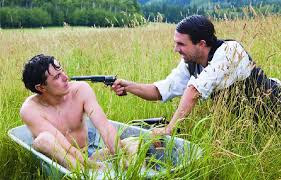 Jack Nicholson traps the foppish Marlon Brando in the bath in The Missouri Breaks (1976), though regrettably doesn’t shoot him. If he had, we would have been spared reels and reels of Brando hamming. At least Jack shoots a hole in the tub, emptying it. 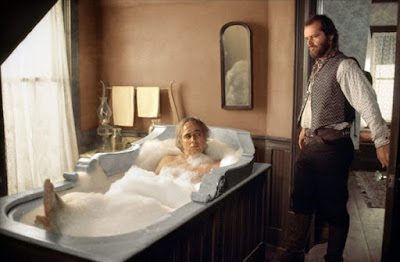 Of course women can take proper baths too. Think of Claudia Cardinale in that fancy bathroom in Once Upon a Time in the West (1968).

Or Shirley MacLaine in Two Mules for Sister Sara (1970). In that one Clint ends up in there with her, spurs and all. In Hannie Caulder (1971) director/writer Burt Kennedy Burtishly had Raquel Welch take a bath in skin-tight buckskins.

Now she's the one with a cigar

But it was the male bath that became standard, for some reason.

I think maybe that nineteenth- and twentieth-century ideas of cleanliness being next to godliness (myself, I always thought ungodliness was next to godliness but hey) added to the idea that being clean was an urban thing, a part of the incoming civilization of the barbarous frontier, part of the ‘taming’ process, meant that a thorough wash was a passage of the wild Western frontiersman towards respectability. It was progress. When sweaty, dusty and unshaven Wyatt Earp arrives in Tombstone in My Darling Clementine (1946) he gets a bath, a shave and a haircut in the Bon Ton Tonsorial Parlor, and puts on a suit and tie. He is uncertain of the hair dressing (it smells of honeysuckle) and asks the barber, “You don’t think it’s too…?” “Oh, no!” is the reply. For Wyatt looks like a gentleman now. An Easterner, in fact. 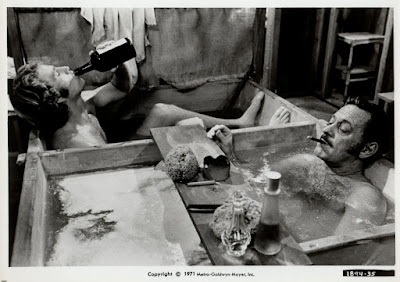 Booze and a cigar. You can't bathe without them.

And one day I’ll do another post about barbers, because they are key Western figures too. You see, I have written about other key elements of the Western, without which the genre would be unthinkable, such as the derringer, the landscape, the hats, and so on. I thought I better add soap and water. 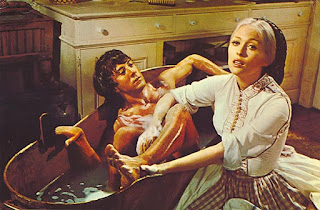 I shall avert my eyes