"I'd like to get my hands around the throat of the son of a bitch that told me to go west."

I was discoursing the other day (I kinda do discoursing) on the abysmal quality of early-1970s Westerns (click here for those pearls of wisdom) and indeed many of those movies were shockingly bad. But they weren’t all terrible. I'm not saying that Bad Company is a great film, certainly not, but it’s no shocker either, and parts of it are rather good.

Jeff Bridges, then 22, topped the billing as Jake Rumsey, though in reality it is Barry Brown, as Drew Dixon, who is the central character. Mr. Bridges, son of another good Western actor, Lloyd, has become something of the grand old man of the Western since his role as Rooster Cogburn in the Coen brothers’ version of True Grit, but this was his first outing in the saddle. He went on to do Rancho Deluxe and Hearts of the West, take a smallish part in Heaven’s Gate, then star for Walter Hill as Wild Bill. 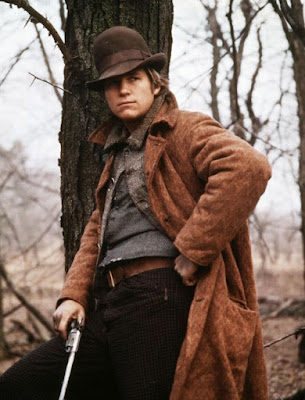 Jeff's first Western
Bridges’s part is almost a juvenile one – in fact all the gang or posse he leads are youths, three teenagers (John Savage, Jerry Houser and Damon Cofer) and one just a boy of ten or eleven (Joshua Hill Lewis). Part of the comedy (and tragedy) is their viridity and ingenuousness in the face of the harsh world of the 1860s frontier. 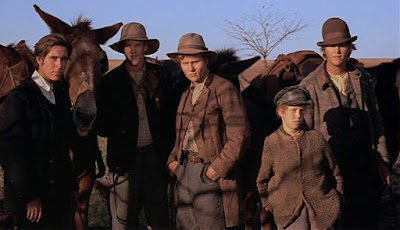 Posse of kids
Brown I didn’t know (he had a minor part in The Great Northfield Minnesota Raid the same year but that’s all she wrote as far as Westerns are concerned) but he is rather strong in this as the good Methodist boy who goes West from Ohio to dodge the Union army draft (a topical matter for 1972) and falls into, yes, bad company. Bridges plays the much more experienced, though equally youthful, fellow he unwillingly throws in with in St Joe, an amoral lout who alternately robs and befriends him. The result becomes almost a buddy movie, with echoes (faint ones, maybe) of Butch Cassidy and the Sundance Kid, as the two pal up and get into shooting scrapes and, eventually, crime. 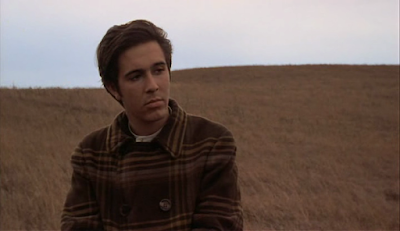 Ohio Methodist trying to stick to the straight and narrow
The director (his first stint in the chair) and co-writer with David Newman was Robert Benton. Benton and Newman did the screenplay of Bonnie and Clyde, and there are perhaps some similarities. The director does a good job on the pacing of this one (which could have dragged but didn’t) and on some of the dialogue too. 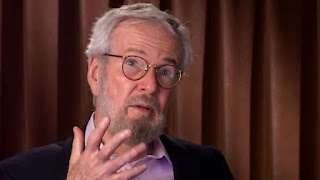 Robert Benton
There is some high-quality support acting from the ‘grown ups’, especially, I thought, David Huddleston as Big Joe, the leader of an incompetent white-trash outlaw band, slightly reminding us of Uncle Shiloh Clegg in Wagonmaster. Of course Bridges and Huddleston would cross paths again later as fellow bearers of the name Lebowski. 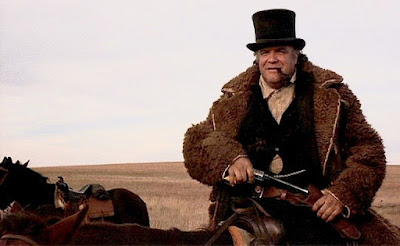 Huddleston good
Also good was Geoffrey Lewis (Clint’s buddy Orville Boggs in Every Which Way But Loose) as one of Big Joe’s inept brigands. Surprisingly good, you might say because a priori one would not have thought him cut out for Western badman parts, though he was the bumbling bandit Amos Tucker in the TV show Gun Shy in the 80s and he did something similar in another movie about a green kid out West, The Culpepper Cattle Company the same year as Bad Company. 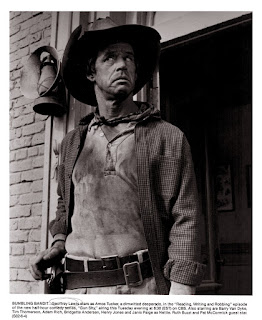 Lewis as bumbling outlaw
The great Jim Davis is ideally cast as the tough marshal who has no compunction about hanging the bandits he catches from the nearest tree, and though it was a small part I thought Charles Tyner excellent as a mean farmer the boys come across – his nasty looks got him small but memorable parts in all sorts of Westerns, such as The Outlaw Josey Wales, Jeremiah Johnson, The Cowboys, and others. 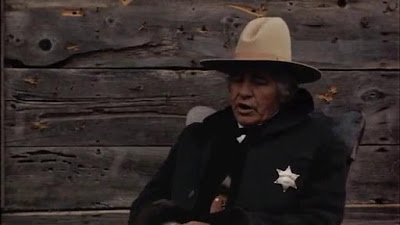 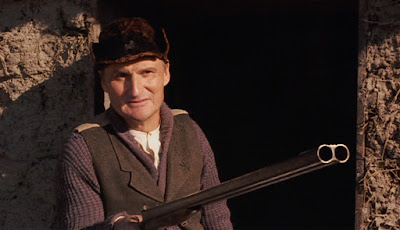 Not a nice man
I liked the music. It’s often just solo piano and this gives the picture almost the air of a silent movie as the characters caper about. It’s by Harvey Schmidt.

It’s filmed in a kind of washed-out color designed, I guess, vaguely to suggest sepia. It was shot in some nice Flint Hills, Kansas locations by Gordon Willis, who did The Godfather parts and various pictures for Woody Allen, but this and Comes a Horseman were his only Westerns.

There are two scenes which were shocking – to me, at least. One was where a homesteader returning from a failed life out West casually sells his wife for sex to the boys, a scene played for laughs, really, but chillingly unfunny, and the other when the small boy is shot in the head for stealing a pie, this latter all the more effectively done by not showing the murderer: we just hear the shotgun blast from the window. 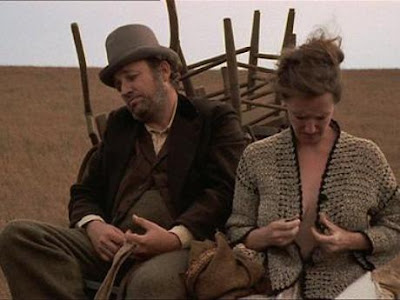 He is bored. She is used to it.
The boys feed store-bought cartridges into the Colt Peacemakers, which was quite clever for 1864, and Marshal Davis asks Big Joe if he knew Curly Bill Brocius in '53, implying that Curly Bill was already an outlaw then (Joe says he taught Curly Bill the border roll). Actually, Curly Bill Brocius was eight years old in 1853. Still, we forgive factual errors in Westerns, don’t we?

As Roger Ebert said, “The boys are held together by no greater bond than the fact that they happened to start out together. They steal each other's horses and guns, abandon each other, save each other's lives and then cheerfully pull a double cross. Their world is totally pragmatic.”

He also wrote, “The movie is built as a series of more-or-less self-contained episodes, and the episodes that work are worth the effort. But we get the feeling the movie doesn't know where it's headed and the last scene (one of those freeze-frames that's supposed to crystallize a significant moment for us) left me suspended in midair. If there were ever a movie that just plain stopped, instead of arriving at a conclusion, this is it. Still, there were some good moments along the trail.” 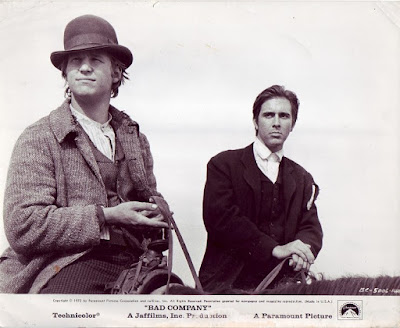 Buddy movie - sort of
The New York Times critic was nicer, and talked of it as “naturalistic, irreverent and sometimes broadly comic”

Brian Garfield said of the movie, “I found it banal and tasteless”. Myself, I see what he was getting at but on the whole found it better than that. It even had some charm. It’s violent and cynical in an early-70s way, yes, but I think it’s the hopeless naivety of the boys that is quite endearing, in a twisted fashion.