Oft have I waxed lyrical (dig the usage) about The Magnificent Seven, a magnificent Western. I am, however, less enthusiastic about the series of sequels that the Mirisch company put out, which were not terrible but generally on the weak side. The name descended to a mere franchise. In 1966, six years after Chris and Vin led the seven in defense of that Mexican village against the bandito Calvera (a renegade from the New York stage), Robert Fuller took over from Steve McQueen as Vin in Return of the Seven. It was a pale imitation, shot in Spain, but at least it had Yul Brynner as Chris again and was directed by Burt Kennedy, so things could have been worse. They were, in 1969, when George Kennedy took over as Chris in the stodgily-directed and weakly-written Guns of The Magnificent Seven - although the seven themselves were perhaps a tad stronger characters than they had been in Return. And then, in 1972, came the last of the big screen sequels – or at least the last for the century – The Magnificent Seven Ride! But it was the weakest.

When a title ends with an exclamation point it’s a sign that the producers are desperate to pep it up and evoke some interest in an otherwise lackluster product. In any case Walter Mirisch must have realized it was now a case of flogging a dead horse, and this go-round was the last – at least until the TV series in the 1990s and the remake in 2016. 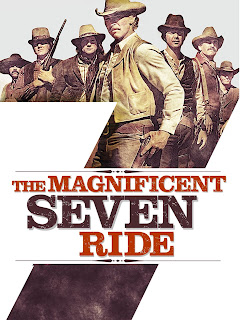 The only thing this picture had in common with the sparky original was the Elmer Bernstein music, but even that didn’t help much.  It now fell to Lee Van Cleef to take the role of Chris. Since the late 1960s Lee had been in full spaghetti mode, appearing in some really bad pictures. The last goodish one he was in was Barquero in 1970, and he was in that stage of his career that would have been called a late flowering except for the crappy material he acted in. Still, Van Cleef is Van Cleef and glory, laud and honor be his. As Chris he does his Van Cleef act, smoking his Col. Mortimer pipe and grunting. He is now a besuited marshal in Sheridan, with a glam young wife (Mariette Hartley), and is a friend of the governor. He is very far indeed from the original Yul/Chris in 1960, that drifting cigar-smoking gun-for-hire dressed all in black. 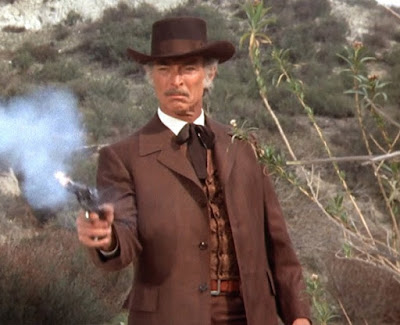 This one was directed by George McGowan – his only big-screen Western. None of the sequel directors was a patch on John Sturges, and McGowan was probably the weakest of all. Similarly, the writing, by Arthur Rowe, who did Mission Impossible and The Six-Million Dollar Man episodes on TV but was now writing his only feature Western, was a very pale imitation of what had gone before. 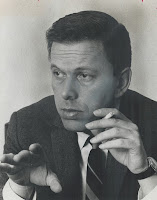 As to the cast, the six gunmen Chris hires are played by actors to whom most viewers’ reaction would have been, Who? Pedro Armendariz Jr as Pepe was the only one Westernistas might have recognized, maybe from Chisum or The Undefeated. Because of the acting, writing and direction, the gunmen are hardly established as distinct characters, so that we don’t really differentiate one from the other much, and don’t really care who lives and who dies at the end. 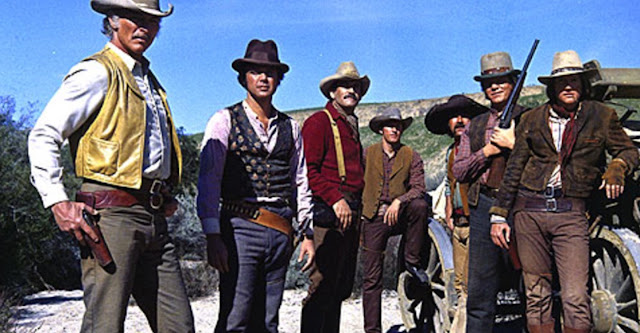 At least it was shot in the US, not in Spain, up at Vasquez Rocks and Joshua Tree, with the Universal backlot Western town here and there. It was in Color DeLuxe, but not Panavision like the other sequels, and was shot by Fred J Koenekamp (The Towering Inferno, Patton, and, in the key of Western, a few minor pictures about the best of which was Heaven With a Gun in 1969). It looks OK, though the modern print (at least the one I saw) has fared the worst of the Mag 7 survivors. 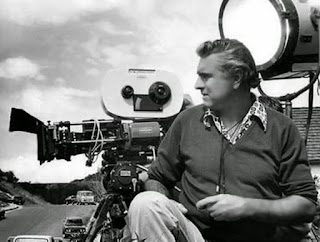 Marshal Chris (of course we never learn his surname in these 1960s and 70s ones) kills two lowdown bushwhackers, thus saving the life of his old pal Jim (Ralph Waite), who has come to ask for his help. Yup, you guessed, Jim's village south of the border is being plagued by bandits, led by the wicked De Toro (Ron Stein). Chris says no, though. He is newly married and has given up all that gun-for-hire business and settled down. Hell, he even wears a brown suit and smokes a pipe. Even when Jim reminds him that he once saved Chris’s life, the marshal still declines. Jim is disappointed.

Now Chris has imprisoned a fellow aged 18, Shelly (Darrel Larson) for robbing a store. Chris’s wife and the robber’s mother both beg for him. He’s only a boy, etc. Chris sets his jaw and refuses to release the chap. Later, however, he succumbs to the blandishments of his fair wife and lets the kid go. Mistake. The lout immediately robs the bank with some friends, kills a man and flees, grabbing Chris’s wife as a hostage. See? The marshal should never have had compassion or listened to them durned women.

A writer turns up, Noah Forbes (Michael Callan, Riff in West Side Story, Hetherington in They Came to Cordura, Clay in Cat Ballou, though he never really made it in Westerns) and wants to do a Buntline job on Chris, writing a lurid dime novel about him. This notion of the biographer who shadows the gunman hero has become a familiar Western trope. Probably the best of them was WW Beauchamp (Saul Rubinek) in Unforgiven but think too of Bob Dylan in Pat Garrett & Billy the Kid or the similar figure played by Hurd Hatfield in The Left-Handed Gun. The would-be scrivener Dobkins (Rick Lenz) in The Shootist gets short shrift from JB Books, though. Chris tells Noah all about how he and Bat Masterson won the Battle of Adobe Walls and how he “outdid” Clay Allison and the Dalton brothers. Slightly odd chronology here, as Adobe Walls was fought in 1874, Allison died accidentally on his ranch in 1887 and the Daltons (most of them) were killed in Coffeyville in 1892. So when is this story set? Well, pardners, who cares?

So, Chris, accompanied now by biographer Noah, ride out in pursuit. They find Mrs. Chris, raped and murdered. Now all thoughts of settling down are forgotten, as Chris sets out after Shelly on a revenge quest. 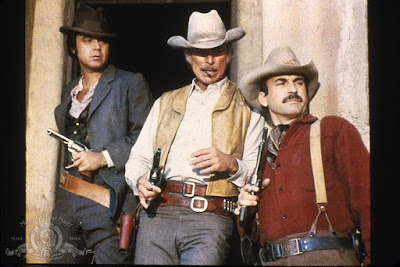 Writer Noah on the left

He catches up with two of the malefactors, and shoots them without a qualm, but Shelly is not there. He’s gone to Mexico. Now, who should Chris meet up with over the border but Jim. “I knew you’d come!” And yes, Shelly has joined with De Toro. So now Chris will be fighting the bandido after all. Surprise, huh.

Noah counts as one gun, even if he is a dudish Eastern writer, but where to get the other five? Ah! Of course. Where he got some recruits in Sequel No. 1. Tucson Territorial Prison. But this time he gets a job lot, all five. They are Elliott, a dynamite expert (Ed Lauter), Walt, a dumb ox (William Lucking), Hayes, an ex-soldier (James Sikking), Pepe, a Mexican (Armendariz) and Skinner, a, er, crook (Luke Askew). See what I mean about an uncharismatic bunch? But The Dirty Dozen had come out in 1969 so viewers were used to renegades and lowlifes being drafted as recuits for dangerous missions. 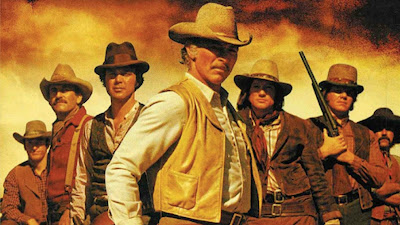 Although the picture is called The Magnificent Seven Ride (!), they don't really. We don't even get the expected shot of them galloping down to old Mexico in anticipation, just some rather sullen men slouching along.

Chris decides to get at De Toro by kidnapping his woman (Rita Rogers). Not very heroic but there we are. Then it’s to Jim’s village, inhabited now pretty well only by women (in early-1970s hair and make-up). Chief among them is Laurie (Stephanie Powers) and Chris doesn’t mourn his dead wife very long because straight away it’s lerve. 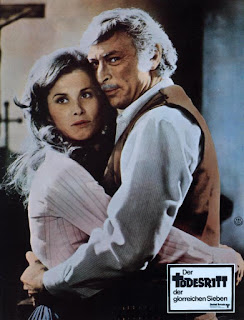 No period of mourning for Lee

As usual, Chris and the men (and in this case the women) prepare the village for the coming onslaught, building walls, putting up nets, etc., as was their wont. They also set dynamite charges. The seven teach the ladies how to shoot. 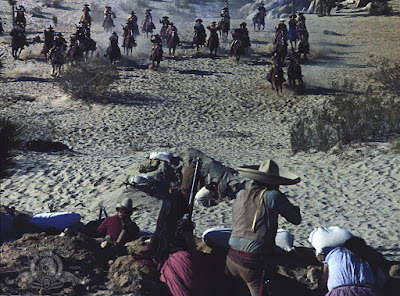 De Toro and his men attack and so there are many loud bangs and people falling off horses. Some of the seven are hit and some are not. But we don’t really mind. Chris gets De Toro, but this bandit leader is a feeble paper-thin character with no lines. Never mind Eli Wallach’s charismatic Calvera, this bandido isn’t even Emilio Fernandez’s Lorca or Michael Ansara’s Diego. Poor writing and direction. 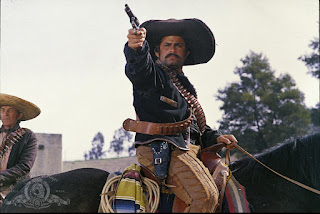 There’s a cheesy happy-ever-after ending and that’s that. It really wasn’t very good, I fear. This film was better than spaghetti westerns of the era and occasionally just staggers up to the mediocre, but that's about the best you can say.