In a Valley of Violence (Focus World/Universal, 2016)

A post-spaghetti or faux-spaghetti or neo-spaghetti (take your pick), In a Valley of Violence opens with cheesy 60s cartoony titles and jangly music, and proceeds with a vengeance plot that is not a million miles away from that of High Plains Drifter, with one semi-jokey difference. 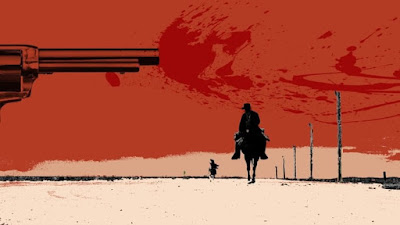 The movie was filmed before but released after Ethan Hawke’s only other Western (to date), when he was Goodnight Robicheaux in the remake of The Magnificent Seven. Apparently, while filming The Purge, Hawke was staying with producer Jason Blum and they watched a lot of Westerns together, leading Hawke to suggest that Blum make one. 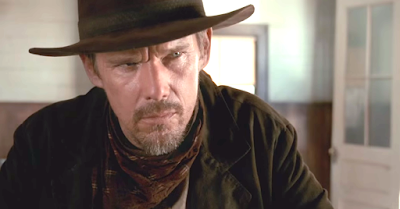 A man with a name (Paul)

It also featured John Travolta as the marshal, surprisingly perhaps in his very first Western (you can’t really count Urban Cowboy). The IMDb Trivia page says that his part was based on a real marshal from Clovis, NM named BJ Wheeler. That’s the second mention of Wheeler I’ve come across (he’s also supposed to be the basis for Bill Pullman’s character in The Ballad of Lefty Brown) but I can find nothing on this mysterious figure of the old West. Maybe a reader from Clovis will enlighten me. 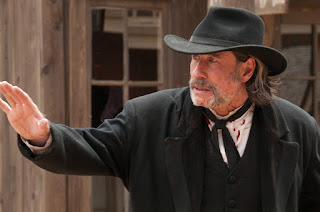 The picture was directed, written and edited by Ti West, who is more used to horror films and this is his only Western. At least he has a good surname. He described the film as "a revenge movie where the characters are too dumb to succeed". It’s the sort of nudge-you-in-the-ribs Western where clichés are knowingly wheeled out as in-jokes for the cognoscenti, reminding you slightly of Tarantino, though without quite so much talent or clever editing. Most of the characters are implausible and/or under-developed. It’s mildly entertaining, though, and you could watch it.

The real star is the mutt Abby (Jumpy, already in her third movie), an Australian Cattle Dog x Border Collie, which is one of those trained canines that makes Lassie look dumb. It’s overdone, the way the critter has been trained to cover its eyes with a paw in despair, for example, and the aw-how-cute moment of the dog in its own tub as master and mutt take a bath. Certainly Abby steals every scene she is in. The ‘joke’ is that the bad guys kill this dog and it is for that that the hero vows revenge on the town and exacts it. The New York Times critic said that “it seems that dogs are the new wives.” Of course any right-minded and decent viewer will think quite right too, the villains deserved all they got, killing a dog like that. I mean, a guy can always get a new wife.

The hero, Paul (Hawke) is on the lam, heading for sanctuary across the border in Mexico, when he comes across a drunken priest (Burn Gorman) who has been mistreating his mule and who fires on the stranger. Paul quickly and correctly knocks the reverend down (there’s a Wilhelm scream from the clergyman as he does so) and takes his water canteen (the rogue was only really interested in whiskey anyway) and rides off into the town of Denton.

You'd think he'd be a man with no name, or at least called Clint or Clay or something, but it's Paul. Humor, I think.

There he gets into it with a stupid town thug, Gilly (James Ransone, fellow-cast member of Hawke various times) and bests him, leading Gilly to go grrr and swear revenge, you know how they do. Unfortunately it turns out that Gilly is not only a deputy in the town, but also the marshal’s son. Oops.

We meet two sisters, Ellen and Mary-Anne (Karen Gillan and Taissa Farmiga, both very 21st century in diction and dialogue) who spend most of the day sniping at each other. Ellen is the fiancée of Gilly. Good luck with that. Mary-Anne takes a shine to the newly-arrived stranger Paul, and his dog. He, though, thinks only of his dead wife. 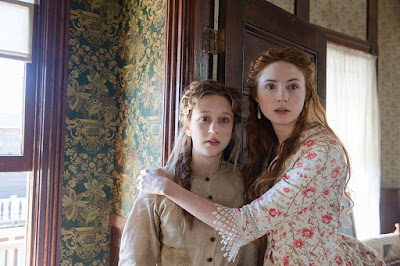 Beautiful, yes, and they look like sisters, but not very 1880s

Marshal Travolta (he has a wooden leg) runs Paul outa town. That’s OK, he was going anyway. But Deputy Gilly and three henchmen (Toby Huss, Tommy Nohilly and Larry Fessenden) follow him, against the marshal’s orders, and kill Abby, the swines. That does it. Paul tells the interred pooch that he knows he promised her not to kill people anymore but unfortunately he’s going to have to go back on that promise. He returns to Denton…

There will be blood, as one by one the thugs pay for their canicide. Finally, in a street very like the one where the showdown occurred in Silverado (it was actually shot in Santa Fe and Galisteo, NM) Paul comes face to face with Gilly, with the marshal between the two, desperate to stop the shooting (he knows his no-good offspring will lose). The two gunmen resolve this problem - the obstacle of the marshal, that is - quite efficiently.

It’s a simple plot, straightforwardly linear in its telling. It’s reasonably well done and harmless enough, two-and-a-half revolvers, and the gonzo humor might bring a slight smile to your face (or possibly a curl to your lip).