Chris is back. Sort of.

By the end of the decade that had started so gloriously with The Magnificent Seven in 1960, with its third iteration, i.e. the second sequel, Guns of the Magnificent Seven, the franchise had become decidedly watered down. The first sequel, Return of the Seven, reviewed the other day (click the link for that) only had one cast member from the original, Yul Brynner, but Guns in 1969 couldn’t even boast that. George Kennedy took the part of Chris. 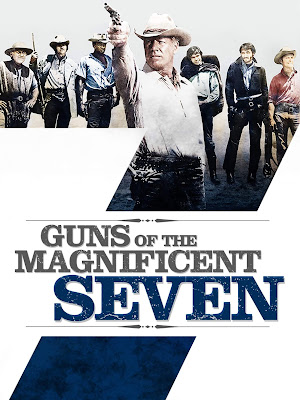 Now I’m sure Mr. Kennedy was a very nice fellow and all, and he was rather ‘in’ just then, having just won an Oscar for Cool Hand Luke, but in all honesty, portly blond men ought not to try being gunslingers. It doesn’t work. George had done quite a few Westerns but he was in his mid-40s now and carrying some avoirdupois. I don’t think he was terribly athletic to begin with. He tries to be stony and tough, chewing cigars and all, but he just wasn’t Chris. Sorry. 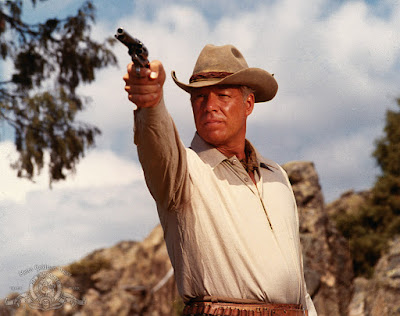 George did his best to be Chris

Burt Kennedy had directed the first sequel. He could be good on a good day but he was no John Sturges. Now it was Paul Wendkos’s turn. He had helmed Face of a Fugitive, Fred MacMurray’s last oater, at Columbia back in 1959, and that wasn’t bad. He had been hired by Harry Cohn on the strength of The Burglar, a 1957 low-budget noir and to be fair he did create with Fred an atmospheric oater with a somber note to it and quite a bit of toughness. But otherwise in our noble genre all he directed was this Mag 7 sequel and Cannon for Cordoba, a semi-spaghetti with George Peppard in 1970, the Nth gringo-in-the-Mexican-revolution movie. That was another Mirisch production, which reconvened the crew from Guns the year after. I’m afraid that taken altogether Paul's was a less than glorious Western career. 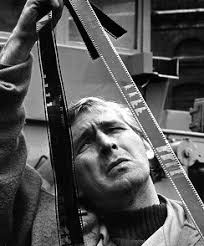 The superb writing of the original had also not been replicated. Schlock-horror and blaxploitation merchant Larry Cohen had written the first sequel, and pretty pallid the screenplay was too, and now Herman Hoffman was hired to do the ’69 one. Hoffman had been an associate producer on Bad Day at Black Rock at Metro in 1955 but had written no big-screen Westerns. Difficult to know why he was chosen for this one. 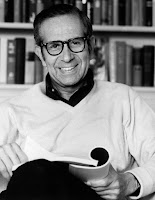 Walter Mirisch (left), the producer, was still keen to milk the basic Seven Samurai idea for all it was worth (after all, Return had made a buck or two) and he was at least ready to shoot in Panavision and Color DeLuxe, and he was also, presumably, ready to pay Elmer Bernstein a bit more (the music is still great, and this time re-orchestrated) but that’s about where the extravagance ended. The picture was filmed in Spain and the cast was modest, to say the least.

They didn’t try to bring back Vin with another actor (Robert Fuller had taken over from Steve McQueen in Return), nor Chico (Julián Mateos had replaced Horst Buchholz). That hadn’t worked well. So this time the other six that Chris takes on in this one are new guys. But of course we are still asked to believe that someone other than Yul is Chris.

To be fair to Guns (and I do try to be fair, you know) I would say that the seven are rather stronger characters than they had been in the Burt Kennedy picture. They are more delineated and there’s even some attempt (a bit anyway) at character development. Wendkos and Hoffman allowed more screen time for the gunmen to be found and hired (this version is ten minutes longer than Return) and as a consequence we can identify them, and identify with them, that much better. 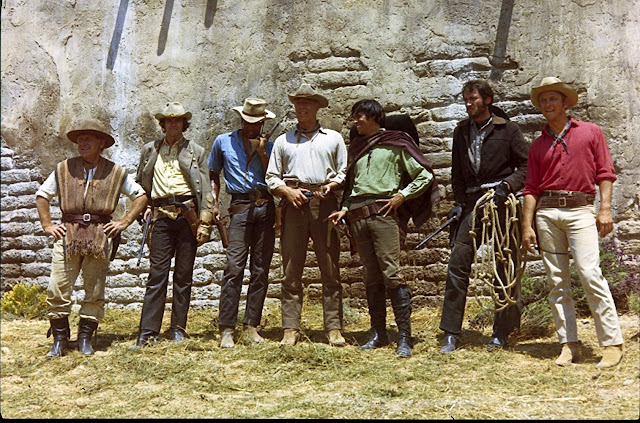 The ‘Vin’ figure this time is Keno, played by Monte Markham, who looks a lot more like Steve McQueen than Robert Fuller did. The red shirt helps. And being blond. Mr. Markham was not a Western specialist; before this he had only had a small part in Hour of the Gun. But he does OK in this role. Chris saves him from being hanged, so Keno is a bit beholden to him.

Monte goes for a rather cheeky McQueen vibe

The Chico figure is Maximiliano, whom the compadres address as Max, played by Reni Santoni, in his only Western. Chris accepts him as one of the band, even though he’s not a gringo gunslinger. So that’s three. 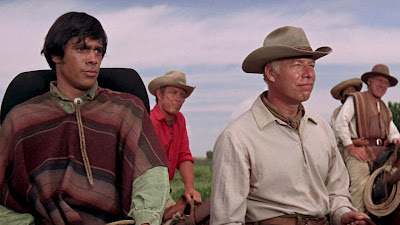 Next there’s a mine cave-in and a heroic black man saves a miner but is fired for his trouble by a racist foreman, so he joins up too. He’s Cassie, played by Bernie Casey, of the Los Angeles Rams, in his movie debut but also in his only Western, poor soul. So we’re up to four. 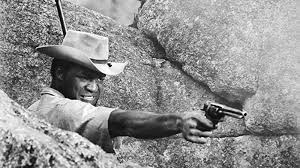 After that we get Levi, who is living a happy but impoverished life as a peasant with a Mexican wife and young son, and who at first says no but changes his mind for the $100 pay, which he desperately needs. “Nobody handles a knife like you do,” Chris tells him. Levi is played by second-billed James Whitmore, an actor I like. In a Western career that spanned a quarter of a century he was, for me, memorable in The Outriders, The Command, The Last Frontier, Chuka and (unfortunately) Chato’s Land. Levi is No. 5. 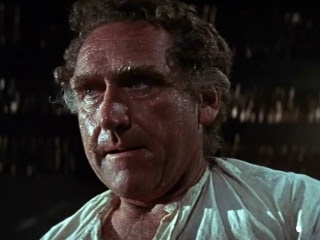 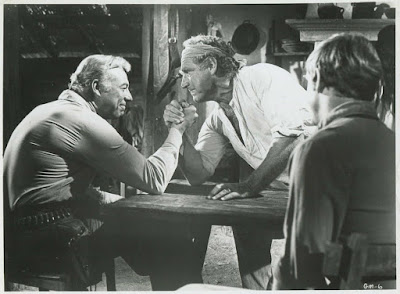 Another strong character is next, Joe Don Baker as ex-Reb Slater. He’s doing some fancy shootin’ in a Wild West show dressed as Buffalo Bill in a false goatee (a bit like Randolph Scott in Ride the High Country a few years before). He’s a crack shot too, despite a crippled arm. But he’s very bitter about the way life has treated him. So that’s 6. 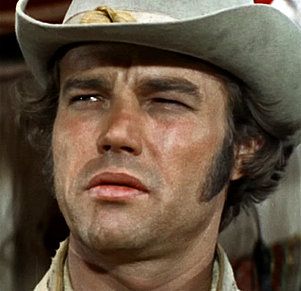 Joe Don is a bitter ex-Confederate

And lastly we have the mysterious and tubercular PJ (Scott Thomas – yup, his only Western) who is the slinky gunfighter type, and will take the job whatever it is and whatever the pay.

Chris flips up a seven of spades. The team is complete. You sense that both Slater and PJ will be amongst the ones to perish. Just a guess.

So they set off, in the by now time-honored fashion, riding down to Mexico, but this time snazzily in silhouette.

So what’s the mission once over the border? Drive some bandidos away from a poor village? Nope. This time there is a corrupt and repressive regime which is crushing the liberty of the noble Mexican folk, represented by the cruel Col. Diego, who is in charge of a brutal prison where innocent folk are incarcerated and tortured. He is not a nice man at all. Good news, though: Col. Diego is played by our old pal Michael Ansara, Cochise in the TV Broken Arrow, often an Indian – he was a Syrian-American and looked vaguely exotic. But he did a goodly number of big-screen Westerns too; one thinks of Only the Valiant, The Lawless Breed, Three Young Texans, Pillars of the Sky, The Tall Stranger, Quantez, and many others. 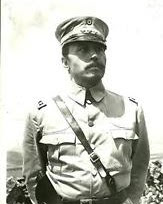 Ansara is the sadistic colonel

Well, Chris and his valiant six must somehow free from this penitentiary the noble Mexican revolutionary Quintero, a Madero-like figure who is decent and democratic and so forth, but who is being brutally held by the nasty colonel. Only he can lead the Mexicans to liberty, equality and fraternity.

This Quintero is played by Fernando Rey, so he is back from the previous Mag 7 film. In that one he was the village priest. Now he has been promoted to arch-goody to be saved by the seven. 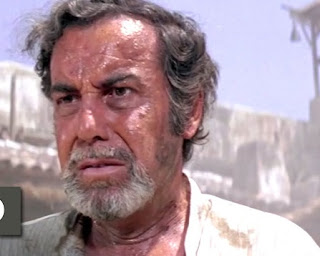 Fernando is the revolutionary leader

However, although the seven themselves are better, on the Mexican side this picture is a bit weaker than Return. Return had the splendid Emilio Fernandez, El Indio, as the bandit chieftain, with Rodolfo Acosta as his principal henchman. Excellent. This one has Frank Silvera as the drunken and debauched bandido Lobero, but he will not get to the last reel. He will be sidelined, replaced by his No. 2, and will die from indigestion (a bullet in the stomach) off stage in a casual mention. Silvera you will recognize for sure. Actually a black man born in the British West Indies, he was quite pale-skinned and, especially in the days of black & white movies, he could be drafted for any vaguely ‘ethnic’ role. From Viva Zapata! in 1952 through Valdez is Coming in 1971, via The Cimarron Kid, Hombre, The Stalking Moon and more, Frank could always be relied on to be a Mexican, especially a scoundrel Mexican. 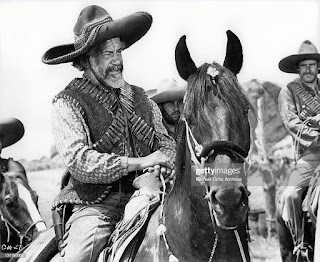 Silvera is the bandido
(Getty Images)

So you see, actual real-life Mexicans were thin on the ground.

As for the odds, well, in The Magnificent Seven Calvera was said to have forty men, while in Return of the Seven Lorca (Fernandez) had fifty. But this was the era of galloping inflation, so the wicked colonel has 200. That’s twenty-eight and a half to one. Oops. Still, they manage to free some prisoners and train them up a bit as cannon fodder, so that helps.

Quite a bit of bonding now goes on. Chris and Keno become buddies, and an unlikely friendship develops between the Confederate Slater and the freed slave Cassie – they both feel victimized by society, you see. "You tell me how it is to be a cripple," Cassie says to Slater, "and I'll tell you how it is to be black." This probably is the best bit of the film. PJ gets a Mexican girl who falls for him and nurses his fever, Tina, played by Wende Wagner – remember her from Rio Conchos? And old Levi gets to bond with a little boy who joins the group, as a daddy-substitute. The kid’s real pa is imprisoned by the evil colonel, you see. So they all get a kind of partner. Except Max. He has to go it alone.

Well, there’s an action finale as the good guys storm the prison, with mucho dynamite. They have to neutralize a Gatling gun on the walls first. As you will know, even if you haven’t seen it, certain of the seven fall in the melee, and others survive. You may well guess that Chris will live to tell the tale (there was another sequel to come yet) but as to the fate of the others, well, dear e-pards, you’ll just have to watch it and see.

All in all, it wasn’t awful, though it wasn’t terribly good either. And coming out as it did in the year of The Wild Bunch and True Grit, you certainly could not say that it was one of the better Westerns of the year. Nor of course was it a patch on The Magnificent Seven. ça va sans dire. But still, you could give it a go, at least once. The New York Times said it had “all the magnificence of a dead burro” but I think that’s a bit harsh.