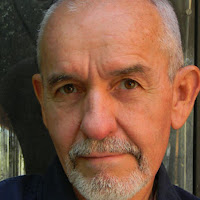 James Carlos Blake (left) writes very well. There is a ‘literary’ tone to his prose, and while he is not Cormac McCarthy, he can perhaps be compared to, say, Charles Frazier, with a dash of Larry McMurtry thrown in. The trouble with his books is not the writing. It’s that his central characters are so loathsome. The Friends of Pancho Villa is a fine book (click the link for a review) but it tells the life of the perfectly detestable Rodolfo Fierro, Villa’s private executioner. Blake also wrote The Pistoleer, a fictional life of the also repulsive John Wesley Hardin. If the author’s aim is to get the reader to identify with these characters, understand them or even sympathize with them, he makes an odd choice of dramatis personae. Wildwood Boys (Harper Collins, 2000; paperback Perennial, 2001) is the story of William T Anderson, Bloody Bill, the Confederate guerrilla leader and bandit, who was certainly one of the Civil War's most savage and bitter combatants and may even have suffered from delusional paranoia, which exacerbated an already sadistic personality. At any rate, a nice man he was not.

As often with paperback editions, quotations from enthusiastic reviews of the hardback pepper the opening pages. “A superb and engrossing novel,” the Milwaukee Journal Sentinel calls it. “A captivating … fascinating read,” trumpets the San Diego Union Tribune. It has, according to the Tampa Tribune, “more than its share of lyric beauty” (I wasn’t aware that lyric beauty was shared out, but anyway). They may be right, these reviewers, but my reaction is always skeptical. I’ll be the judge of that, I say. 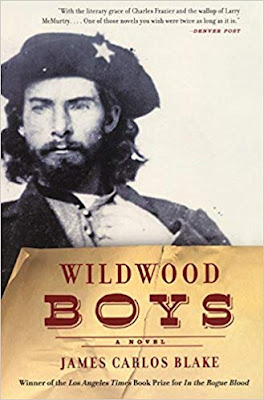 Still, once engrossed in the pages (and the book is engrossing) you have to admit that it is pretty lyrical. Does he even overdo it? Take this passage:


The moon grew plump and pale as a peeled apple, waned into the passing nights, then showed itself again as a thin silver crescent in the twilit western sky. The shed of leaves became a cascade of red and gold and after a time the trees stood skeletal against a sky of weathered tin. The land lay bled of its colors. The nights lengthened, went darker, brightened in their clustered stars. The chilled air smelled of woodsmoke, of distances and passing time. Frost glimmered on the morning fields. Crows called across the pewter afternoons. The first hard freeze cast the countryside in ice and trees split open with sounds like whipcracks. Came a snow flurry one night and then a heavy falling the next day, and that evening the land lay white and still under a high ivory moon.


Perhaps I am being unkind, or expecting overmuch, but it just seems to me that the writer is trying a bit too hard. I am reminded of Dr. Johnson’s dictum, “Read over your compositions, and wherever you meet with a passage which you think is particularly fine, strike it out.”

Yet there’s no denying that much of the description is poetic and occasionally brilliantly phrased.

The narrative is linear, with no flashbacks or trendy flitting about between the (then) past and future. Blake does, however, occasionally slip into present tenses for a passage and then revert to the past simple. It works, stylistically. We get the story of William T Anderson (no one knows what the T stood for; possibly Thomas because there were Thomases in his family) from his birth to his death. This straightforward approach is actually quite refreshing now and then.

We read about him growing up in Kansas (where his family removed from Missouri, Blake suggests because Anderson père had got too fond of horse rustling). We are told that the boy had a gift of communicating with dogs. He understood them and ‘spoke dog’, as it were. OK. We are also given an account of an incestuous relationship he developed with his sister Josephine, who throughout the novel is the love of his life, even after her death in the 1863 collapse of the house in which she was imprisoned (it is this which turns Anderson implacably towards revenge). It doesn’t make very pretty reading, but then nor does 99% of Anderson’s curriculum vitae. I don’t know what evidence, if any, there is for either of these things, the canine communication or the sister-love, but that’s the privilege of a novelist writing a life, I guess. You don’t need evidence. 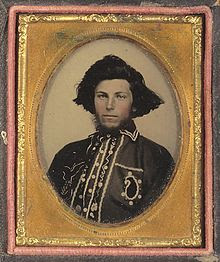 Photographed in the guerrilla shirt and classic long hair

When his hero does join the Confederate guerrillas, Blake does not shy away from the atrocities and war crimes, though he does emphasize those of the Union militias in such a way as to if not justify, then at least partially explain the brutal actions of Anderson and his confrères. He has a point: bushwhackers or jayhawkers, it was often hard to tell the difference, for both were as close to bandits as you get, both were ruthless and brutal, and both committed massacres. The looting and burning of Osceola in 1861 by Jim Lane’s men was remarkably similar to Quantrill’s attack on Lawrence in 1863, though Quantrill’s assault was considerably worse in terms of number of lives lost.

The local Missouri and Kansas population had to engage in a deadly guessing game when blue-uniformed men arrived on their farms and demanded to know their loyalties, for it was the habit of the Confederates to dress in captured Union uniforms. The wrong answer could leave the farmer hanging from a tree and his buildings in flames. To the sufferers, it often made little difference which side their tormentors were on; the result was the same. 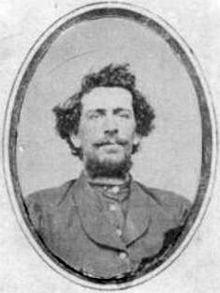 Taken in Sherman, TX for his wedding

Blake does not mention some of Anderson’s worst crimes. For example, it is generally accepted that after Confederate forces under General Joe Shelby conquered Glasgow, Anderson traveled to the city to loot. He visited the house of a well-known Union sympathizer, the wealthiest resident of the town, brutally beat him, and raped his 12- or 13-year-old black servant. Anderson indicated that he was particularly angry that the man had freed his slaves, and trampled him with a specially trained horse. The man later died of his injuries. Anderson killed several other Union loyalists and some of his men returned to the wealthy resident's house to rape more of his female servants. This would be hard to have your book’s hero do if you want to retain a modicum of sympathy for him. 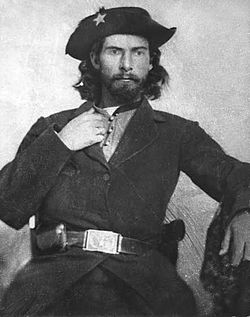 The most famous photograph. The infamous Bloody Bill.

Famous guerrillas who rode with Quantrill and Anderson enter the pages of the book but fairly peripherally, and they are not central characters. Cole Younger, for example, is first mentioned on page 119 of my edition, appearing as “a beefy red-haired man”, quite jovial but with a strong streak of ruthlessness, and he reappears from time to time in the narrative, but only incidentally. Arch Clement is portrayed as particularly vicious. Similarly, Frank James is introduced on p 190 and pops up occasionally thereafter but he does not really emerge as a character. His younger brother Jesse, who was not at Lawrence (though he is often shown there in Western movies) and only joined the guerrillas in the spring of 1864, gets a bit more page-space from Blake, after his first appearance as a seventeen-year-old beardless youth on page 319.

As for Quantrill (and that spelling is used) he comes across as educated - given to using Latin tags and quoting “Sir Bacon”, presumably Francis of that ilk– and he is credited with insisting that no woman be harmed at Lawrence, so he is something of a Southern gentleman. It is true that Quantrill had been a schoolteacher for a time, also taking up a job in the lumberyards, unloading timber from rail cars, in order to support his family, in debt after the death from TB of Quantrill père. But he was hardly a gentleman in the then understanding of that word.

In the book Anderson and Quantrill get on well at first but gradually become estranged, especially when Quantrill objects to Anderson’s marrying Bush Smith (who looks, according to Blake, extraordinarily like his sister Josephine). This was perhaps dramatically useful. It is, though, possible that in reality Anderson always harbored a resentment of Quantrill, who claimed to have encountered a band of renegades in July 1863 and rebuked them for robbing Confederate sympathizers. These bandits were led by a certain Bill Reed but William Anderson and his brother Jim were prominent members of the gang.

While wintering near Sherman, Texas, 1863/64, Anderson and Quantrill appear to have fallen out seriously when Quantrill expelled one of Anderson’s men for stealing, and then Quantrill’s men killed the thief when he attempted to return. Anderson then rode to Sherman and told General Cooper that Quantrill was responsible for the death of a Confederate officer; the general had Quantrill arrested and taken into custody but he soon escaped. Anderson was told to recapture him and gave chase, but he was unable to locate his former commander and stopped at a creek. There, his men briefly engaged a group of guerrillas loyal to Quantrill, but no one was injured in the confrontation. None of this appears in the book, though.

Novels are not supposed to be true biographies, though you do sense that Blake has read deeply in his subject. This is a romance, and romances should be taken for what they are and not criticized for not being something else. I found this book to be extremely readable, and you will, probably, too. 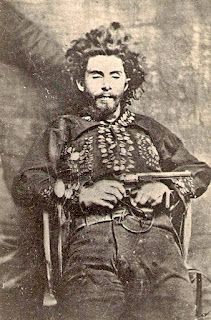 Photographed dead
And a Happy Christmas to all our readers! Here's looking forward to a Western 2020.