About a month ago we were looking at a couple of Red Ryder movies starring Allan ‘Rocky’ Lane that Republic put out in the late 1940s, Stagecoach to Denver and Homesteaders of Paradise Valley. I thought it only fair to watch another pair, ones with Bill Elliott in the lead. Today it’s Sun Valley Cyclone and next time we’ll have a look at Conquest of Cheyenne. 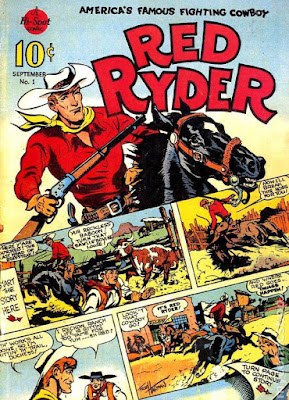 Red Ryder and his young Apache sidekick Little Beaver had first appeared in a phenomenally successful comic strip in 1938, and would move to radio in 1942 where Reed Hadley was Red and his sidekick became Buckskin (Horace Murphy). It was another hit, even beating out The Lone Ranger in the Hooper ratings. But between those two events, Red’s creator, the media-savvy marketing visionary Stephen Slesinger, did a deal with Republic Pictures and the studio put out a 12-chapter serial The Adventures of Red Ryder, starring Don ‘Red’ Barry, in 1940 – soon to be reviewed, you will be utterly thrilled to hear. Another smash hit. So it was time for a series of full-on feature films. There would be 23 between 1944 and 1947, with Rocky Lane and Wild Bill Elliott taking the part of Red, both having Bobby Blake as Little Beaver. One (another Bill Elliott one) was even titled Lone Texas Ranger, which was a bit cheeky. In 1949 and ’50 Eagle-Lion would take over, releasing four Red Ryder pictures in color, no less, with Jim Bannon as Red. But those will be for another day. 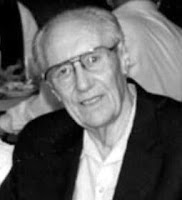 The two we are viewing now were directed by our old pal RG Springsteen (left, photographed in older age) We have been looking at RG a fair bit recently. He was one of those workhorse directors who churned out the pictures for various studios with great professionalism, on time and on budget, and even if they weren’t great works of art (I don’t think RG ever challenged Ford, Hathaway or Hawks for an Oscar) and they were just low-budget one-hour black & white second features, they were still a lot of fun – and hugely popular. Just occasionally he made a better Western and was allowed an ever-so-slightly bigger budget, but not often. And not in this case, I fear.

Bill Elliott (1904 to 1965), pictured right, was Gordon Nance to start with, a son of Missouri but his father was a cattle rancher and buyer for the Kansas City stockyards. Riding and roping were part of Gordon's upbringing and he won first place in a rodeo event in the 1920 American Royal livestock show. So that was a good start. He appeared in his first Western, the silent movie The Arizona Wildcat, in 1927, and he became Gordon Elliott. But when sound arrived he found himself to bit-parts and being an extra. Columbia Pictures noticed him though, and offered him the title role in its serial, The Great Adventures of Wild Bill Hickok (1938). The serial was so successful, and Elliott so personable, that Columbia promoted him to starring in his own series of Western features, replacing Columbia's number-two cowboy star Robert "Tex" Allen. Now he was Bill Elliott. Within two years, he was among the Motion Picture Herald's Top Ten Western Stars, where he would remain for the next 15 years.

In 1943 he signed with Republic and made Calling Wild Bill Elliott, a title that, along with the Columbia serial he had done, would give him the name he was known by for the rest of his screen career. His trademark was a pair of six-guns worn butt-forward in their holsters. He was only Red Ryder for two years but it was enough to make sixteen appearances in the role. He went on making Westerns well into the 1950s but never made a successful transition to TV (two pilots were not taken up). He retired from movies, working for a time as a spokesman for Viceroy cigarettes and hosting a local TV program in Las Vegas, Nevada, which featured many of his Western films.

He was handsome, big and brawny and became famous for using the line, "I'm a peaceable man, but ..." (there inevitably followed by an outburst of violence).

The plots of all the movies were remarkably similar: Red arrives, finds that some local villains are engaged in skullduggery, thwarts them with the aid of Little Beaver and much gallopin’, fisticuffs and shootin’, and they all lived happily ever after.

This time we open with a shifty type. Must be a baddy - he’s Mexican, has a mustache and is smoking. You and I, because we are Westernistas, will recognize our old pal Roy Barcroft in disguise. He eavesdrops on Red talking to the local marshal (Hal Price), and even tries to shoot Red through the window but luckily Red’s great black horse Thunder soon puts a stop to that. Some idiot suggests shooting the horse because it attacked a man, and Red has to speak up in Thunder’s defense. Time for a flashback. 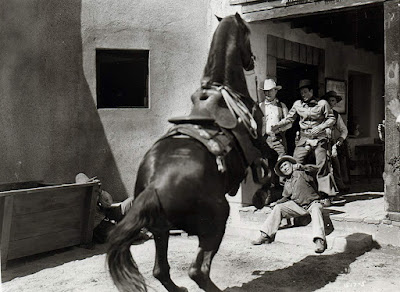 Brave and clever Thunder comes to the rescue

We must be in 1898 (though of course all the costumes, guns, etc. are 1870s, as per usual) because Theodore Roosevelt (Ed Cassidy) is recruiting his Rough Riders, and Red is going to join up – naturally he knows Teddy. But the colonel tells him he has a more important and more patriotic mission – to stop the horse rustlin’ in Wyoming. America’s gonna need horses if it’s to win in Cuba. “Use a big stick!” urges the future president. While he’s with Col. Roosevelt Red manages to bronc-bust a splendid wild stallion and Teddy is so impressed that he gives the nag to Red, and Red names him Thunder. So now you know.

Well, once up in Wyoming, he naturally heads for the Duchess’s ranch. This time the Duchess is played by Alice Fleming, rather buxom in an ample fringed-buckskin skirt and handy with a shootin’ iron to boot. She is on bad terms with her rancher neighbor, Major Harding (Eddy Waller) and they shout at each other, accusing one another of rustlin’, breaking fences and other heinous crimes. Little do they know that it’s a vicious gang to blame, and the gang is led by none other than the major’s own foreman, Blackie Blake (yup, Barcroft). 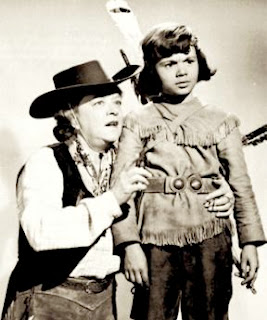 Alice is the Duchess

There’s a subplot of a romance between Thunder and a fair white mare but there’s a paint stallion that doesn’t care for this interference and Thunder and the feisty paint end up fighting it out over her (not a fun scene, actually). It ends up with the wicked Blake nabbing Thunder and, when he cannot ride him (for no one but Red may do that) the swine takes a whip to the black. Such villainy! 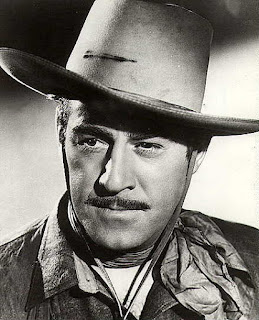 Well, there’s much galloping hither and yon, but never fear, right will triumph over might, Thunder will be restored to his rightful owner and the US war effort will not suffer a shortage of equine resources. Red has saved the day again!

All good stuff if you were about ten years old in 1946 (especially as there is no wet romance to slow things down) but actually, to be fair, still quite fun now.