As opposed to Fast West

I was going to review for you today The Fighting Lawman, the second Wayne Morris oater of 1953, and I know millions of you were hanging on with bated breath to read that, but I am sorry to disappoint you. The DVD wouldn’t work. It barely loaded the first of the ‘double feature’ program, The Marksman, but eventually did, reluctantly. However, it would not play the second movie for love or money. I have sent a sharp e-mail to the supplier, Rarewaves in the US, a sort of you-shall-smart-for-this message, and we shall see if they furnish me with a product that actually works. It’s annoying when you lay out hard-earned $$$ (well, $$$ anyway) for a Western you REALLY NEED to see and can’t then watch it.

The good news is that a kind Christmas present from a nephew did work and not only that, it turned out to be a really good Western. So today we shall get Slow West, instead.

Odd title. Perhaps it refers to the pace of the movie, which is far from accelerated. In a good way though: it’s one of those Westerns that gradually builds tension, and in any case there are flurries of action and violence to satisfy the action-Western freak (yup, me too). Slow burn, you might say. Or maybe it comments on the nature of the journey (for it’s a quest-Western), which was necessarily slow. The film moves at the pace of a walking horse, or occasionally man. We are in pre-railroad 1870 Colorado (1873 Peacemakers abound but that’s par for the course) so it’s not a high-speed affair. 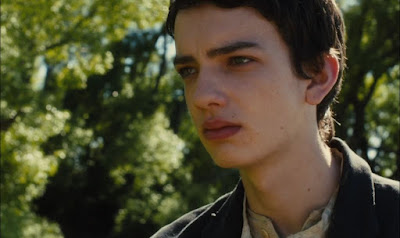 Kodi is the naive youth

We meet a young man, just a gangly boy really, Jay Cavendish (Australian actor Kodi Smit-McPhee, who was Viggo Mortensen’s son in The Road) who has come to the American West from Scotland in pursuit of the love of his life, Rose (South-African/New Zealander Caren Pistorius) who fled there with her father John (true Scot Rory McCann) after a murder (I think). This kid is from a posh family and educated (he has read Darwin, speaks French and knows the constellations) but he's green as all get out, yet somehow lives a charmed life. Armed only with a malfunctioning pistol, and absurdly, a manual bearing the title Ho! The West, he somehow survives all manner of white lowlifes, Indians and natural dangers with nary a scratch.

Cruelty and desolation
He comes across a hard-bitten tough-guy, wise in the ways of the West, Silas Selleck, played by Michael Fassbender, a German-Irishman (you see, it’s a very international cast) whom I remember from Inglourious Basterds and 12 Years a Slave but was apparently also one of the X-Men. He’s rather good in this. He seems to suit (and relish) the role of the cynical and wry character he portrays. The innocent young traveler hires Silas (who takes pity on the lad as “a jackrabbit in a den of wolves”) as guide. Poor boy. Little does he know (how I love that phrase) that Silas isn’t just helping him out of kindness, or for pay, but because he holds a wanted bill on Rose and is after the $2000 reward. He knows the kid will lead him to his quarry. 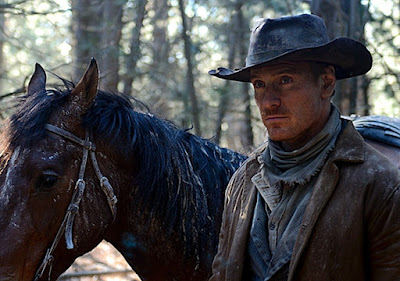 Death is everywhere, casual, sudden, unexpected. Three soldiers hunting an Indian for sport, a storekeeper held up by some starving Swedes, the Swedes themselves, a burnt-out Indian village. One good thing, the Swedish wife shoots the storekeeper with a derringer, so that sent the picture up in my estimation. Silas and Jay leave all the corpses in the store but outside find two fair children, non angli sed angeli, as Pope Gregory might have said, but the two traveling companions do not know what to do with them, and so do nothing, and leave. 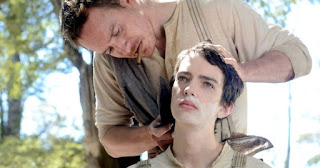 You wonder why they bothered. Surely the boy doesn't shave yet?

There’s a curious interlude when Jay leaves Silas (in disgust) and, alone, comes across a man with a wagon (but apparently no horse to pull it) in the middle of nowhere. Is this a nod to Anjelica Huston in Seraphim Falls? Probably not. This fellow, Werner (Andrew Robertt) seems to be an anthropologist of sorts, writing a study of the aboriginal peoples before they are wiped out, or their culture is, by conversion to Christianity. The two exchange philosophy and friendship. Jay speculates that mankind will build a railroad right to the moon, and kill any natives unfortunate enough to live there.

“So now, East. What news?” Werner asks.
“Violence and suffering.” Jay replies. “And West?”
Werner looks at him. “Dreams and toil.”
It’s not the sunniest of outlooks. When Jay wakes the next day, it seems that Werner has absconded with everything, including Jay’s clothes. Only Jay would have been naïve enough to believe Werner’s blandishments. No one is to be trusted, I suppose is the message. Luckily, Silas comes up to him again, and is re-engaged. He has Jay's horse and possibles. Jay asks him if he killed Werner. Silas says no, but you don't know if it's true. 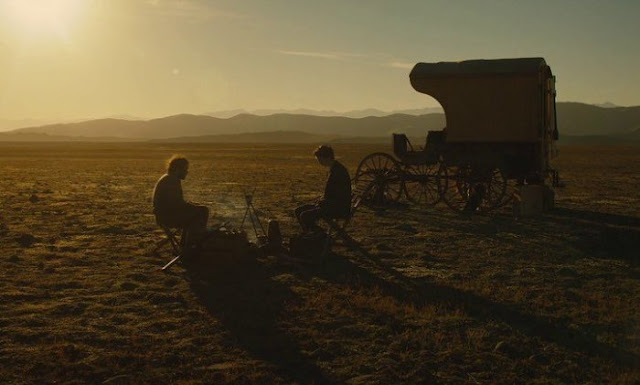 Many other bounty hunters are after Rose, including a minister in a clerical collar with a large gun case containing a Sharps (Tony Croft, I think; the credits aren’t very good) and a gang of outlaws, who seem to have adopted the two children, led by a certain ruthless Payne, a homophonic name if ever there was one, in a bulky coat that references several other Westerns (I think especially of the assassin Butler in McCabe & Mrs. Miller) and we are told that Silas used to be part of Payne’s gang but left it. Payne is played by Ben Mendelsohn, the only other actor after Fassbender that I knew. He was the best player on the set of Netflix’s Bloodline, and comes near to stealing the show here too as the charismatic gang boss. 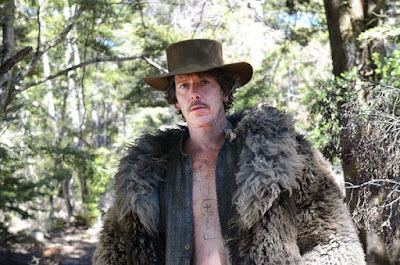 The outlaw gives them absinthe. Though la fée verte was a Swiss invention it became all the rage in nineteenth century Paris. It seems to have got to Colorado too. Jay and Silas wake up next morning with the worst imaginable hangover when a flash flood strikes, and, yup, their guns are gone. Payne!

Jay invents a novel but effective way of drying their clothes.

The friends (for we sense that though an odd couple, they are slowly becoming friends) come across the remains of a man crushed by a tree in the woods, the hands outstretched either side of the trunk, one hand grasping an axe. In the battle of Man v. Nature, Nature sure won that round. It’s bleakly funny. 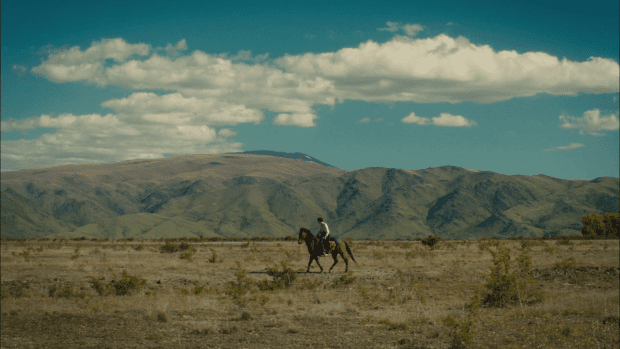 Silas finally shows Jay the wanted poster. “It means dead or dead, kid.” The poor boy is crestfallen. We now come to a pristine cabin, inhabited by Rose and John Ross. Cabins in Westerns are always shown as old but they must have been new at some time, one supposes, and this one is brand spanking. Everyone, Jay and Silas, the homicidal clergyman and Payne’s gang are all closing in on this domicile. There will be blood.

John and Rose have a friend, Kotori (Kalani Queypo, a real Indigenous American), whom they treat well (i.e. like a human being) and thus earn his undying (or dying, actually, as it turns out) gratitude. Rose will be pretty quick with a firearm. The trio, with Jay and Silas attempting to assist them (with only limited success) will combat the massed ranks of the would-be killers. My lips are, as ever, sealed as to the outcome, for of spoilers shall there be none. I will say only that there are casualties… And that the final shoot-out is deftly staged, brilliantly shot and skillfully edited. 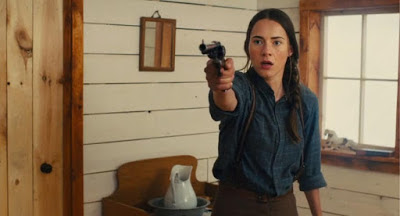 Rose no slouch with a pistol

There’s a whiff of Coen brothers about the whole thing, sardonic being an adjective that comes to mind, and indeed, on one of the DVD extras the director/writer makes a specific reference - obeisance really - to the Coens. What no one mentions in the interviews but I found unmistakable was a comparison to Jim Jarmusch. The wide-eyed innocent and wily guide making a dreamlike journey through the murderous West reminded me much of Johnny Depp and Gary Farmer in Dead Man. Said writer/director is John Maclean (not the Die Hard one; that’s a different spelling), who formed the folktronica Beta Band and the more psychedelic Aliens and made their music videos. In 2009 he made (on his mobile phone) a short with Fassbender, Man on a Motorcycle (which is on the DVD). It’s interesting that his first big film should have been a Western, and I am only glad that Westerns, good ones at that, are still considered cool enough to make in this brave new century of ours. Hoorah! 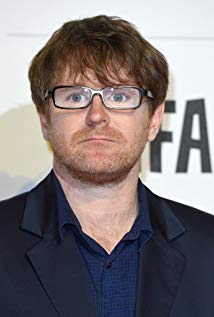 Maclean shot it in New Zealand, managing to find a part not infested with hobbits and orcs, I guess, with the Scottish flashbacks filmed in his native Scotland. 90% of the footage is exteriors. I must say the photography is very fine. The DP was Irishman Robbie Ryan, Oscar-nominated for The Favourite in 2018. And New Zealand manages to look convincingly Coloradoish. Stephen Holden in The New York Times talks of “the disparity between the rugged majesty of the landscape and the savagery of its outlaws and adventurers, who resemble vermin scuttling through the underbrush of a perilous no man’s land.” 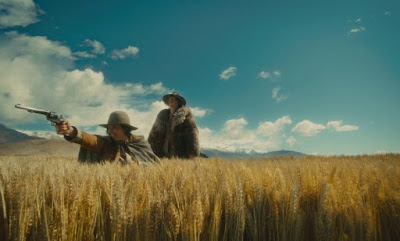 Given Mr. Maclean’s background, it is not surprising that music plays a big part in the picture. Australian composer Jed Kurzel (who apparently put the score together in three days) went down the jangly faux-folk route and it’s really good. There are a few songs too. One, a Gaelic ballad, was left on the cutting-room floor. You can see it on the outtakes. It was rightly excised…

It all has the feel of a ‘proper’ Western but perhaps with added emotion and it’s somehow ‘younger’. It definitely has aspects of the coming-of-age movie, though in the end young Jay doesn’t become the worldly Silas; Silas becomes Jay. It’s a love story, with black humor (especially in the basic fact that Rose doesn’t love Jay at all). It’s cleverly edited and the end-result is sometimes oblique, allusive, implied. Though it has garnered very positive critical acclaim (there are a million reviews on IMDb) I read that it grossed less than $230,000 in the US. A pity. It deserved better. It’s really very well done, by cast and crew. It’s what a 21st century Western ought to be. Full marks, boys and girls. Forget all the other plaudits: you earned a four-revolver Jeff Arnold's West rating. That doesn't happen every day.