The series Deadwood (three seasons, starting 2004 - click the link for our review of that) was the best TV of its decade. The combination of writing, acting, direction and setting was never equaled – in any show, in any genre. I certainly have never seen better TV in my (now quite lengthy) lifetime. So it came as a great shock when HBO unaccountably pulled it in 2005, with the story left hanging. It was a foolish decision and a most unfortunate one. Gregg Fienberg, who directed 4 episodes, said, “The cancelation of Deadwood was like a shot to the heart.” He was right. 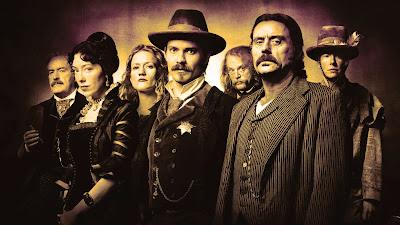 There was for some time talk of a pair of two-hour TV movies to complete the story but that never happened. In April 2017 series creator David Milch submitted a script for a two-hour Deadwood film to HBO. Another long pause ensued before finally, in July 2018, HBO confirmed that a Deadwood movie had been greenlit and that Daniel Minahan, who directed four episodes in the series's original run, would direct, with production set to begin in October 2018. The film was released Stateside in May this year, arriving here in the Old World in June, August or October, depending on your country. It’s now available on DVD. 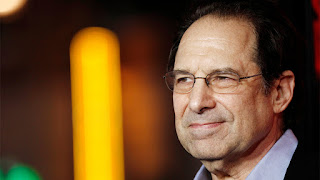 Miraculously, nearly all the cast members were reunited – astonishingly when you consider their other commitments. Powers Boothe (Cy Tolliver), Ralph Richeson (Richardson) and Ricky Jay (Eddie Sawyer) had died, and Titus Welliver (Silas Adams) couldn’t get away from Bosch. But all the others appeared, so we got Al Swearengen, Seth Bullock, Alma Ellsworth, Trixie, Charlie Utter, EB Farnum, Calamity Jane, George Hearst, Mr. Wu, and so on. Some of them had aged somewhat in the intervening thirteen years but hey, they’re entitled. And that was the idea anyway. 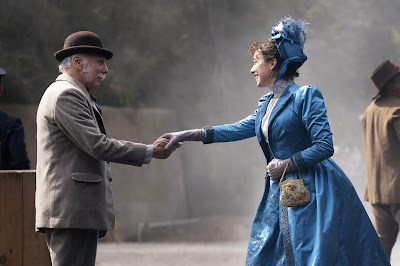 The greatest aspect of the original show was the writing. 19 writers were credited for the 33 episodes but there is no doubt that towering above them all was David Milch, a huge talent. He produced what I called Shakespeare in the mud. A former English teacher at Yale and published writer, he gained fame for Hill Street Blues in the 1980s and NYPD Blue in the 90s, earning a stack of awards. He was creator, writer, and executive producer of Deadwood. In 2018 Milch announced that he was suffering from Alzheimer’s, and so he took a hands-off approach to the production of Deadwood: The Movie, and yet it is abundantly clear from the script that he had lost absolutely none of his ability. It is stunningly good.

It is also clear from the special feature on the DVD in what affection the cast and crew hold him, and how they admire him. “He is the best, the best.” (Paula Malcolmson, Trixie). “A bona fide bit of a genius.” (Ian McShane, Al Swearengen). Timothy Olyphant (Seth Bullock) says that whenever he is stuck or unhappy with a scene on any show, he just asks himself what David would do.

Milch says that the movie is “a rumination on time” and yes, the characters have aged. I warn you now: some of them die. Others had very reduced parts, little more than cameos that remind us of former glories, but that is inevitable with the runtime. For me, the one I missed most was the newspaper editor AW Merrick (Jeffrey Jones). He is only seen in the background and has no lines. Tragic. But hey, they can’t all star.

Some of the dead ones come back, though, in flashback or otherwise. There’s a momentary appearance of Keith Carradine as Wild Bill. Garret Dillahunt, who played two characters in the series, Jack McCall and Francis Wolcott, and should therefore be dead on both accounts, briefly pops up as Drunk No. 2, yelling out about his father dying in the street.

Much of the original Deadwood had disappeared (it was the Westworld set) and production designer Maria Caso, who won an Emmy for her work on the series, had to study the original series closely to rebuild original landmarks (such as the Bullock home) accurately. 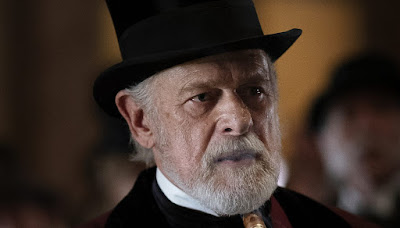 The real star is the language. Milch has always been able to pull off that fiendishly difficult trick of blending florid Victorian parlance with earthy Western vernacular. Just occasionally, very occasionally, the dialogue verges on the stilted. But 99% of it is a total delight. It is said that he had help on the movie script from Nic Pizzolatto. Probably the masters of the delivery were McShane as Al and Dayton Callie as Utter, or they had the best lines anyway. Naturally, there is a strong peppering of f- and c- words, as the (brilliant) poster will suggest. It doesn’t take Jane many seconds to utter her first ten-letter imprecation referring to a facial action and a male member. 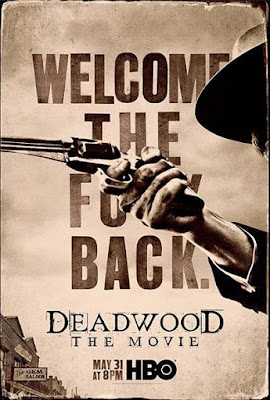 The story is set ten years after where we left off, in 1889, with South Dakota on the verge of statehood. Mayor Farnum (William Sanderson) presides over the celebrations. Bullock (Timothy Olyphant) is still marshal, now happily married and with three children, including a new son. Cy is dead and Joanie Stubs (Kim Dickens) has taken over the Bella Union. Her lover Calamity Jane (Robin Weigert, now in a buckskin skirt) comes back to find her. Mr. Wu (Keone Young) now has a son, or a grandson, to interpret for him, which spoils the fun a bit. Alma Ellsworth (Molly Parker) and her ward Sofia, now grown (Lily Keene) return to the town too. Will she take up again with Seth? Trixie is pregnant by Sol Star (John Hawkes). Al suggests that Sol run for office (the real Solomon Star served as Deadwood's mayor from 1884 to 1898).

Al is aging and sick; his liver is failing, as Doc Cochran (Brad Dourif) tells him. He cares not. The central character of the series, Al now seems almost a detached and objective observer, as Brian Tallerico says on rogerebert.com, “someone watching the action of the characters around him with a stunning sense of finality.” In a way, Al is now Milch.

Unfortunately, though, (but fortunately for the drama) George Hearst (Gerald McRaney), now a senator, is also back, pushing the new telephone across the country, and wanting to buy up Charlie Utter’s land to do it. Charlie will have none of it.

This more or less sets up the plot. I shall say no more, in case you haven’t seen it yet.

I think Aren Bergstrom's review was astute when it said, “Deadwood has never been about plot or formal thrills, even if it’s exceptionally made, and especially well designed. Its focus is more on the characters: their fanciful speeches, their outbursts of anger, the ways they stare each other down in close quarters or share a drink to bury the hatchet. The plot is merely an excuse to get these characters together, to have them inhabit the same town and to let us watch them go about their lives and build up a semblance of civilization in the Black Hills. Although there is more urgency to the plot in the film than in the series, the character moments are still front and centre.” 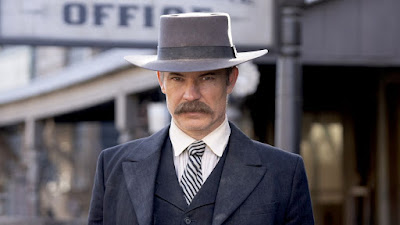 I'm sure his tough Marshal Bullock informed his Raylan Givens

Deadwood: The Movie is a splendid coda to a Western symphony, or song cycle. I am so glad they made it. It still doesn’t excuse HBO for cutting off the series in its prime but I won’t hate them for all eternity now, just until the cows come home.

Why four revolvers instead of five, like the series? I’m not sure. It’s a gut feeling. Perhaps because it is poignant, retrospective, even almost nostalgic (and nostalgia ain’t what it was). It’s not nostalgic, actually. It’s not sentimental anyway. But it’s, um, in some ways about Deadwood rather than being Deadwood, if you get me. Of course four revolvers is pretty damn good on Jeff Arnold’s West. I mean that puts it up there with Day of the Outlaw, Dawn at Socorro, Gunfight at the OK Corral, They Came to Cordura, and other Westerns of that quality. Ce n’est pas rien, as the French say.