The origin of Jackson Hole

The last of the quartet of debutant Westerns that Roy Rogers starred in for Republic in 1938, following Under Western Stars, Billy the Kid Returns and Come On, Rangers! (click the links for reviews of those), took for its title the old vaudeville standard Shine On, Harvest Moon. The movie was no relation to Warners’ 1944 picture of the same title with Ann Sheridan. It turned out to be one of Roy’s most famous oaters, though probably not one of the best. The cowboy chorus croon the title song at the start of the picture and reprise it at the end; otherwise there’s nothing harvesty about the story. 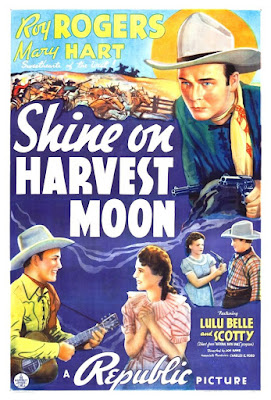 It was the mixture as before, a one-hour black & white sagebrush romance, with Joe Kane directing and Lynne Roberts (as Mary Hart) co-starring with Roy again as his love interest. Roy thwarts the skullduggery of some bad guys and gets the gal, as to be expected.

There’s no comic sidekick this time, though. Instead we get a vaudeville act from Myrtle and Scotty Wiseman, better known by their stage name of Lulu Belle and Scotty, who do their shtick, including a comic song. They were one of the major country music acts of the 1930s and 1940s, known as The Sweethearts of Country Music. 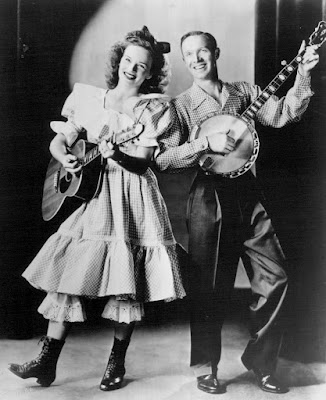 The Wisemans do their thing

The cast is interesting because they recycled an old Western star. The goody owner of a Wyoming ranch is Milt Brower, played by William Farnum, Dustin's brother. Farnum, you will know, went right back. Born in 1876, he had been Glenister in the first version of The Spoilers in 1914, had been Sam Houston for Raoul Walsh in The Conqueror in 1917 and was Lassiter in the Frank Lloyd-directed silent Riders of the Purple Sage the year after. In 1919 he was Buck Duane in The Last of the Duanes and the hero Steele in The Lone Star Ranger. Many other silent Westerns followed and he was a big star but when talkies arrived he started taking smaller roles. He was the Texas Rangers captain in the remake of The Last of the Duanes and the remake of The Lone Star Ranger, and also appeared in two later versions of The Spoilers. He died in 1953. 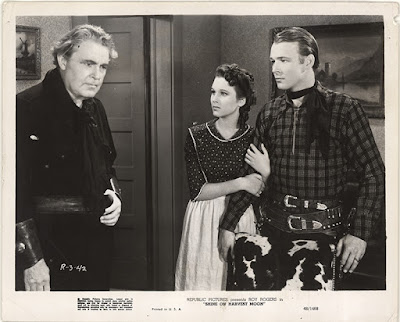 His glam daughter, Claire (Hart) is in love with young Roy, the son of Milt’s late partner, who was Roy’s dad. Roy and Milt now run the place but they have fallen on hard times. The bitter Wyoming winter killed all their stock (so maybe we’re in 1887) and now they are just running cattle for the local banker, Sheldon (Frank Jaquet), basically renting out their pasture. The trouble is that thuggish and ruthless rancher Jackson (Stanley Andrews, later to become 'The Old Ranger' on Death Valley Days on TV but a standby in character roles in Westerns, often as the baddy) wants the Brower-Rogers place for his own nefarious ends and he will stop at naught (naught, I say) to get it. We grasp right away (because this is not the first Western we have seen) that the oily financier is in cahoots with Jackson. Sheldon wears a suit and is a banker so he must be a crook. I’m only surprised he didn’t have a derringer. 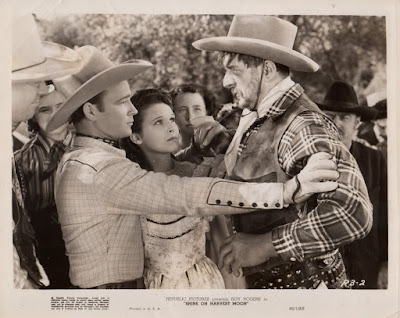 Now, Wikipedia tells us (so it must be true) that Jackson Hole, Wyoming was originally called Jackson's Hole by the mountain men, the term hole being used by early trappers to describe a mountain valley. The official name came in 1893 when a certain Margaret Simpson, at the time receiving mail at her home as there was no post office, named the place in order for Easterners to be able to forward mail West. She chose the name in honor of David Edward 'Davy' Jackson, who trapped beaver in the area in the late 1820s. But Shine On, Harvest Moon has another explanation. Thuggish rancher Jackson has a lair there for outlaws and bandits and he delightedly calls it Jackson’s Hole, a place no man dare enter who wishes to escape with his life. I prefer the Roy Rogers origin. 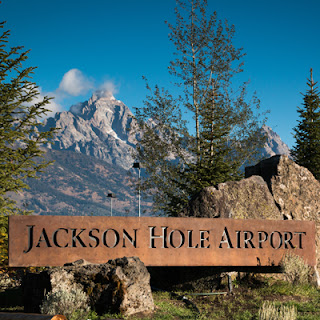 Trigger continues his march towards stardom. He started as just a horse but as the Rogers movies progressed he became cleverer and cleverer. In this one Roy refers to him as “the smartest horse I ever had” and it wasn't be long before he would be saving the day, helping his master out in tight spots and becoming “the smartest horse in the movies”. 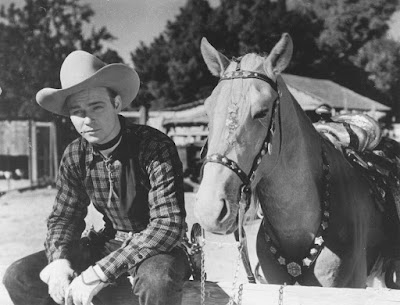 There are six songs as well as the repeat of the title one. The Man in the Moon is a Cowhand and Let Me Build a Cabin stand out. There’s a Fourth of July picnic which of course gives ample opportunity to exercise the vocal chords.

There are the usual chases and fights. You will not be amazed to hear that Roy gets the better of the bad guys. I don't think that constitutes a spoiler.

Well, that’s enough early Roy Rogers for a bit. Another day perhaps we’ll look at some of his later ones, which had a bigger budget and were in color. So long for now, e-pards.