Hoppy goes South of the border

You can’t go wrong with a Hopalong Cassidy Western every now and then.

William Boyd had started them in 1935. He was offered the part of Red Connors in Harry Sherman’s production of Hop-a-Long Cassidy that year, released by Paramount, but asked for the title role instead and was given it (Frank McGlynn took the part of Red). From then on he made Hopalong oaters (he was first Hop-Along, then Hopalong) at a prolific rate: four in 1935, eight in ’36, six in ’37, and eight in 1938 of which In Old Mexico was one. The series went right on until 1948 and then in the 50s we had the TV show. 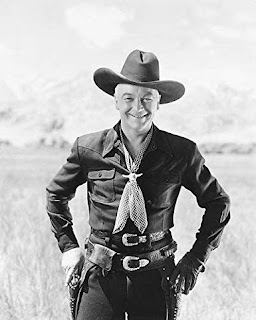 Of course any self-respecting Western hero in them thar days required at least one sidekick and more usually two, a cranky-comic old-timer and a handsome young fellow to romance the ladies (for Hoppy himself was too austere to do that). The old-timer part went to good old Gabby Hayes, as Windy Haliday, and Boyd tried out various ingénus before settling on Russell Hayden as Lucky Jenkins (he went on till 1941). 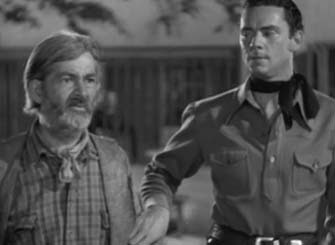 The plots were formulaic second-feature Western with Hoppy saving the day and besting the bad guy, aided (or sometimes hindered) by his loyal sidekicks. This time the trio are down in Old Mehico visiting the rancho of Don Carlos Gonzalez (Al Ernest Garcia). Hoppy thinks he has been invited there by the Don’s son, Colonel Gonzalez of the Rurales (our old pal Trevor Bardette), but the colonel also thinks he has been asked to his daddy’s rancho by Hoppy. In reality, both invites were sent by the fiendish Fox (Paul Sutton), whom Hoppy and the colonel once sent to prison. Now he wants revenge. 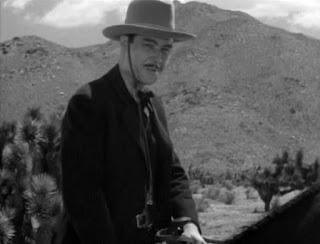 The rather well-spoken Fox

Some good news: the Fox’s chief henchman is Glenn Strange the Great.

Naturally there is a glam dame on the rancho, the Don’s daughter Anita (Jan Clayton) and there is also a, ahem, imposing cook/housekeeper, Elena (Anna Demetrio) who will fall hook, line and sinker for Gabby and plan to make the old-timer her fifth husband. And there’s another woman too, Janet Lees (Betty Amman), who is actually The Fox’s sis, and a fifth-columnist spy in the household. So you can see it’s set up for a lot of plot. It’s amazing how much story they managed to cram into 67 minutes (54’ when edited down later to fit into a one-hour TV schedule). The writer was experienced Harrison Jacobs, though any relation between his character and the original Clarence Mulford Cassidy is tenuous at best. The picture was directed by Edward D Venturini, not a regular (this was his only Hoppy oater). 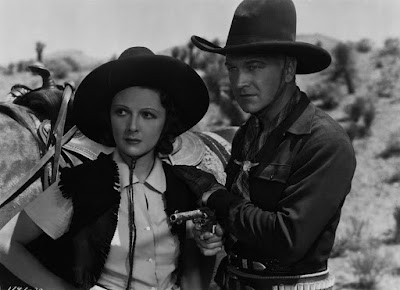 He doesn't romance her, obviously. He's Hoppy after all.

The acting is pretty wooden, with the actors dutifully reciting the lines they have learned (or are reading).

It was shot by Russell Harlan so it's pretty good visually and there are some decent Joshua Tree locations. 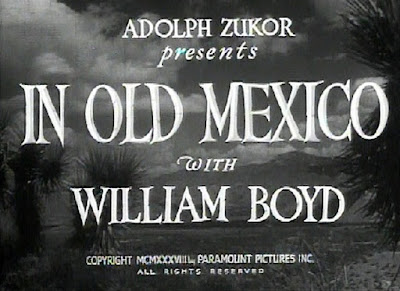 The Fox murders the colonel in cold blood (he’s a real swine) but before expiring the policeman scrawls ZOR in the sand. It doesn’t take Hop a long time (well, it does actually, doh) to work out that these were the first three letters of the Spanish for fox.

In the end the evil Janet gets the drop on Hoppy with – yes! – a derringer! It’s one of those seven-shot pea-shooters that Louis L’Amour featured in Showdown at Yellow Butte and which Mark Twain sported on his stagecoach trip West as recounted in Roughing It. So that improved the movie.

Not that it needed improving.

Gabby is shot, twice, by the bad guys, and is in bed (nursed by fat Elena) and like to die but when the pipsqueak galoot Lucky tells him not to worry, he will look after him, he is so cross that he refuses to expire, saying, “I wouldn’t die now if it’s the last thing I ever do.”