Vaughn Monroe, you probably know, was a trumpeter and vocalist who made his way up through the big bands, eventually in 1940 leading his own and becoming very popular, having over 70 chart hits, notably Let It Snow! He sold 5 million records for RCA in 1944. His band was heard every Sunday on the radio (sponsored by Camel cigarettes) and played to full ballrooms everywhere they went. But he also did two Westerns, both Republic pictures directed by studio regular RG Springsgteen, Toughest Man in Arizona (1952) and this one, Singing Guns in 1950 – a title to strike dread into your heart, I know, but in fact it’s not as bad as all that. 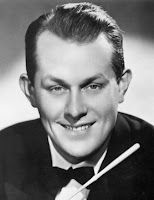 It was in Republic’s Trucolor and a few scenes were shot on location in Sedona but most was of course was done in the studio, as usual for Republic. It was like Johnny Guitar in this way, though the hues have not survived as well in this one and the color looks muddy. It was also like Johnny Guitar in that Ward Bond backed the star up. But that’s where the similarities end. This one is a typical 1940s Western (despite the release date) which verges on the cheesy. 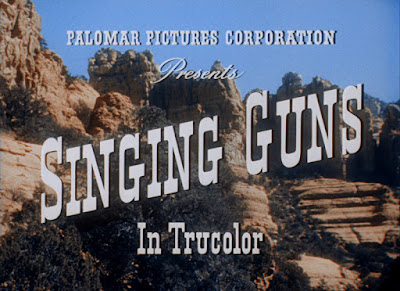 Based on a Max Brand novel, it tells of an outlaw, Rhiannon (Monroe) who by a quirk of fate gets appointed deputy sheriff with the job of bringing himself in. It’s quite an amusing concept. You see, bearded Rhiannon holds up a stage, with Sheriff Jim Caradac (Bond) on board and there’s a bizarre bit where Rhiannon makes the sheriff walk through town wearing woman’s bloomers and hat, so that everyone laughs at him. 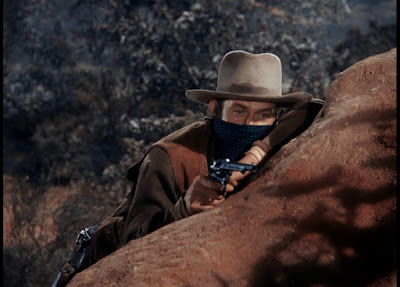 Caradac doffs the female attire, grabs his horse and gives chase but the outlaw ends up shooting the sheriff off his mount. Back in his lair (which you get to through a stream, not a waterfall as in Johnny Guitar) Rhiannon feels remorseful and returns with a shovel to bury the lawman’s body, but the canny sheriff has been playing possum – for many hours, it seems – and is ready for him. There’s a gunfight and this time the lawman is wounded for real. Rhiannon takes him into town to the doc, who turns out to be Walter Brennan. 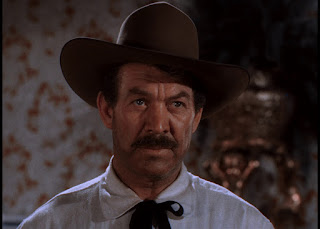 Ward is the sheriff

Now this is where the plot gets seriously improbable. The doc is also the preacher on Sundays, and recognizes Rhiannon but doesn’t let on. He wants to reform him. He knocks the outlaw out with a Mickey Finn, then takes blood from him to make a transfusion to the sheriff. No blood test or anything so the chances of a blood-type match are pretty slim. Oh well. They didn’t discover different blood types till 1901, I believe. Anyway, afterwards, while Rhiannon is still out cold, the doc shaves his beard off and gets him new clothes, and so the grateful sheriff doesn’t recognize his assailant when he wakes, and indeed thanks him for saving his life. Next, at Doc’s urging, Rhiannon is appointed deputy to replace Caradac until he’s recovered. You see, I said it was improbable. 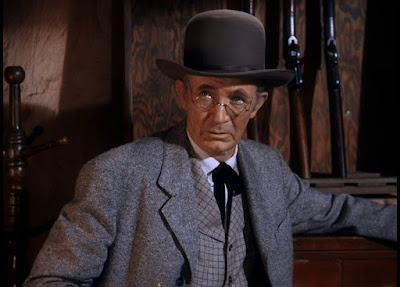 On that held-up stage was also glam saloon owner/gambler Nan Morgan, and she is the sheriff’s gal but now the new deputy moves in on her too. Nan is played by Ella Raines, who was a Howard Hawks signing, for the wartime picture Corvette K-225 with Randolph Scott, and who went on to do three other Westerns, The Walking Hills, again with Scott, Tall in the Saddle with John Wayne and Ride the Man Down with Brian Donlevy and Rod Cameron. She was certainly beautiful and in this one is a feisty moll. 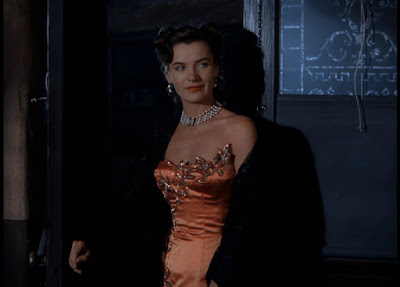 Of course Monroe gets three songs. You couldn’t have a Western with the title Singing Guns starring Vaughn Monroe without songs. First we get Singin’ My Way Back Home (which is done as a curious singin’ showdown with heavy Jeff Corey, not exactly adding to the plausibility quotient of the plot), then the famous Mule Train, a huge hit in 1949 and Oscar-nominated, and lastly a ballad at the piano. I must say he had a rich baritone voice. He had wanted to be an opera singer when he was young. 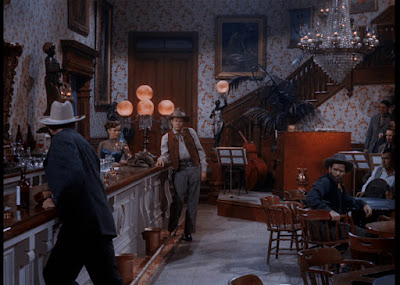 The bad guy is the boss of a mining conglomerate, Richards (Jeff Corey) and it turns out that this swine twice claim-jumped Rhiannon when he was an honest gold miner and that’s why he’s been outlawin’ all this time, amassing a million dollars in gold, hidden in his lair. One of Richards’s henchmen is Denver Pyle, so that’s good. 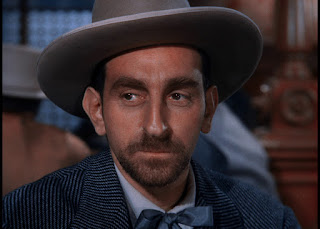 The outlaw turns out to be a durned good peace officer, filling the jail with rowdy drunks and then giving them the option of going to church or a $10 fine, so the preacher has full pews that Sunday. He also heroically saves some fellows in a mine fire and gives a stern but kindly talk to a boy who stole a chicken, which the lad’s mother approves of. So the new lawman gets pretty popular. But he puts off setting out to track himself down. Understandably. 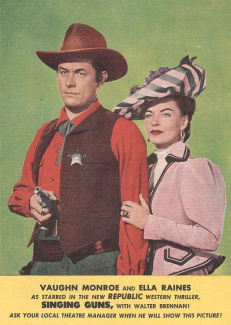 Well, Caradac finally gets better and they can’t put it off any longer, so Deputy Rhiannon escorts the next gold shipment while Caradac is vigilant. You see, Nan has recognized the deputy as Rhiannon, and Doc has confirmed it, so they are on to him.

The climax (eventually: the film is overlong at 91 minutes) has Rhiannon in jail, Corey leading a lynch mob, a dramatic escape aided and abetted by Nan and a Monroe/Bond showdown in the saloon with both guns on the table and the signal to grab ‘em and start blazin’ away being the next person to open the batwing doors. Gripping stuff. 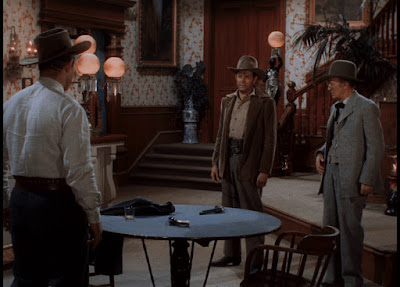 You may guess how it ends.

Well, well. No harm done by watching this one. Don’t expect greatness but if you enjoy a straight-down-the-line (or trail) oater, you could do worse.

By the way, John Doucette is a briefly-glimpsed miner and Rex Lease drives the stage.

You can get in in BluRay.

Thanks to Gary Tooze for the pics.