There has been quite a little mini-genre of ‘blind’ Westerns. Cameron Mitchell was a gunfighter who goes blind in Minnesota Clay, Peter Graves was blind in Fort Defiance, and Pat Wayne managed to shoot accurately, though sightless, in An Eye for an Eye. On TV too gunman Jan Merlin was blinded by Audie Murphy’s six-shooter in Episode 1 of NBC's Whispering Smith, and James Drury was a blind gunslinger in Episode 32 of ABC's Stagecoach West. The idea is that these pistoleers manage to aim accurately by hearing, or some sixth sense. One of the most egregious of these blind gunmen was the character Canaan in Blind Justice.

It was a mid-90s HBO movie, so could go for violence and the occasional bared breast and so on. It wasn’t very good, in all honesty, though is just about watchable. The hero, or central character anyway, Canaan, was blinded in the war (we see flashbacks of the horrors of conflict; he somehow landed in a mass grave and had lime tipped over him) yet can now shoot with unerring accuracy. At one point he hears a scorpion crawling near a man and shoots it to stop the critter stinging the fellow. A likely story. Canaan is played by Armand Assante, who was, in fact, one of the better things about the more recent Western The Man Who Came Back, in which he was the bad guy. He was apparently Belizaire the Cajun in 1986, though that is not a movie I know. Not a Western, you see. Now he is a blind bounty hunter, dressed all in black. There’s more than a hint of Jonah Hex about his character. 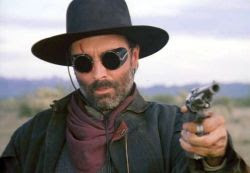 There's none so blind

It’s a ‘treed town’ plot. A few soldiers under the command of a tough sergeant (Adam Baldwin, no relation to the Baldwin acting clan) are holed up, defending a shipment of silver, and a ruthless bandit chief (Robert Davi, from Licence to Kill) is going to take the town to get it. Obviously there’s a glam woman for the hero to canoodle with (Elizabeth Shue) and less obviously there’s a scurrilous priest (Ian McElhinney) who is in cahoots with the bandido. And there’s a crazy Indian shaman (Jimmy Herman, who was Stone Calf in Dances With Wolves and a particularly convincing older Geronimo in TNT's 1993 Geronimo) who shows his opinion of the Christian priest by leaving a dead dog on the church steps, etc. 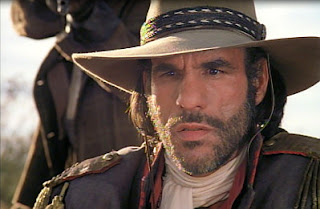 For some reason Canaan has a baby with him, that he has sworn to take to a town no one has ever heard of and may be mythical. Or something. 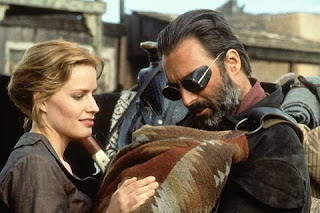 Not quite sure where he is going with that baby

Canaan agrees, somewhat reluctantly, to help the soldiers, in return for a tenth of the ton of silver.

There is much shooting, a good deal of torture (Canaan is crucified at one point), and the man in black escapes from a burning ring of fire in a way that would have pleased Johnny Cash. There’s a climactic showdown involving much use of dynamite, hidden in a coffin, spaghetti-style. 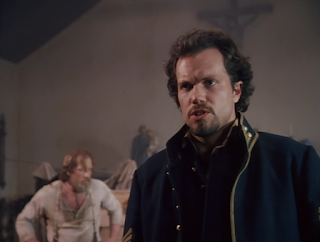 Sgt. Baldwin does his duty

It was shot in various parts of Arizona. The director was Richard Spence, from Yorkshire England, his only Western. The screenplay was by Daniel Knauf, a producer.

It’s pulp fiction, a modern spaghetti western, I’d say, though with better acting, script, sound and staging than those dire rip-offs of yore. 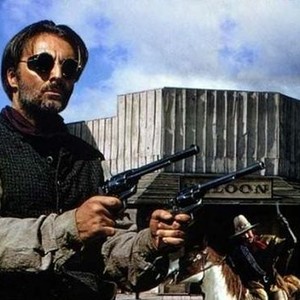