Tension at Table Rock was a classy Western from RKO in the mid-1950s, that high-water mark of our noble genre. The team putting it together was very strong indeed. It was directed by Charles Marquis Warren, written by Winston Miller from a Frank Gruber novel, shot in Technicolor by the great Joe Biroc and had music by Dimitri Tiomkin. In addition, the cast was top-notch.

I was writing about the Western career of Warren the other day, so click the link in the first para for that. 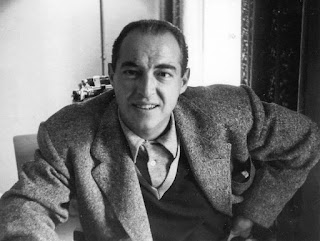 Winston Miller, born 1910, began as an actor and indeed had an important part playing the hero Davy as a boy in John Ford’s 1924 epic The Iron Horse. Later he would become a producer (he produced several episodes of The Virginian, for example). But he is best known as a writer, starting on The Vigilantes Are Coming in 1936, penning Man from Cheyenne for Roy Rogers and Heart of the Rio Grande for Gene Autry in the early 1940s before reaching greatness by writing My Darling Clementine for Ford in 1946. He penned two good noirish Westerns in 1948 (oh, epic Western year), Fury at Furnace Creek and Station West, and Warners' Carson City in 1952, then Paramount's The Far Horizons in 1955. Later on he would write episodes of Rawhide. He really knew what he was doing, and his work on Tension at Table Rock is very good.

Miller as the boy Davy in The Iron Horse and later

As for Frank Gruber (1904 to 1969), whose novel Bitter Sage Miller used as source, he wrote over three hundred stories for the pulp magazines and sixty novels too, as well as many screenplays. His first novel, The Peace Marshal, was rejected by every agent in New York at the time, but finally became the movie The Kansan, starring Richard Dix. The book reached total sales of over a million copies. For TV he was the originator of The Texan, Tales of Wells Fargo and Shotgun Slade. 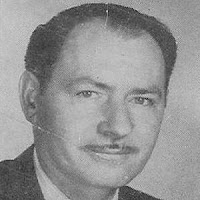 Frank Gruber
It was Gruber who famously said that only seven plots for Westerns existed.
They were:
*   The Union Pacific story. The plot concerns construction of a railroad, a telegraph line, or some other type of modern technology or transportation. Wagon train stories fall into this category.

*   The Ranch story. The plot concerns threats to the ranch from rustlers or large landowners attempting to force out the proper owners.
*   The Empire story. The plot involves building a ranch empire or an oil empire from scratch, a classic rags-to-riches plot.
*   The Revenge story. The plot often involves an elaborate chase and pursuit by a wronged individual, but it may also include elements of the classic mystery story.
*   The Cavalry and Indian story. The plot revolves around "taming" the wilderness for white settlers.
*   The Outlaw story. The outlaw gangs dominate the action.
*   The Marshal story. The lawman and his challenges drive the plot.
Another talent Gruber had: he said that, while in the Army, he learned how to manipulate the dice to throw 35 consecutive sevens. Yeah!

Joseph F Biroc (1903 to 1996) had been a young cameraman on the 1931 Cimarron but had first been DP on It’s a Wonderful Life in 1946. As far as Westerns go, there were many but one might mention especially Quincannon, Frontier Scout  in 1956, Forty Guns in ’57, and oaters for Robert Aldrich such as 4 for Texas and Ulzana’s Raid. He also shot the John Wayne picture Cahill, US Marshal and the great comedy Western Blazing Saddles. In a down-to-earth and modest way Biroc once said, “Actually the way I photograph is the way they photographed 40, 50, 60, 80 years ago. It's just basic lighting and basic photography.” 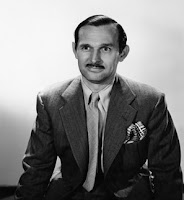 Dimitri Tiomkin, Дмитрий Зиновьевич Тёмкин, 1894 to 1979, as you certainly know, was one of the greats of the film music business. He scored thirty-five Westerns and will be eternally remembered for High Noon but also in particular for The Westerner, Duel in the Sun, Red River, The Big Sky and Gunfight at the OK Corral. He was kind of fond of the introductory crooned ballad but we'll forgive him that. 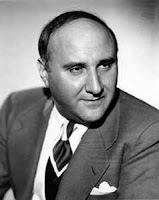 So, Warren, Miller, Gruber, Biroc and Tiomkin, it was a hell of a team.

As for the cast, it was led by Richard Egan. I was talking about him the other day, when we looked at a late Western (well, semi-Western) of his, Mission to Glory, but actually I think Egan was quite good in oaters. He appeared in eight feature-film Westerns in the 1950s, Kansas Raiders, Return of the Frontiersman (to be reviewed soon), Wyoming Mail, The Battle at Apache Pass, Cripple Creek and, probably his best known Westerns, his lead role in Love Me Tender as the boss Reno brother and his second-billed part as the sneering gambler Jehu in These Thousand Hills. Much later in his career he did Mission to Glory in in 1977 and The Sweet Creek County War in ’79.

In Tension at Table Rock he plays tough gunman Wes Tancred (Wes was a classic gunfighter name, because of John Wesley Hardin) tired of having to defend himself against every wannabe punk who challenges him, who adopts an alias and gets a job at a remote stage way-station. But of course, as we know will happen, violence and danger will not leave him alone… He is haunted by a song, The Ballad of Wes Tancred, which suggests, like The Ballad of Jesse James that I suppose it was based on, that Wes shot his best friend in the back. Egan is good in this part, managing to convey both toughness and regret. Brian Garfield, in his short review of the movie, wrote, “…the cast is fine except for Egan, who is extraordinarily and inexplicably wooden here” but I must say I didn’t see that at all. I thought he was rather powerful.

Second-billed is one of my all-time favorite Western actors, Dorothy Malone. The IMDb bio calls her a “blonde, sultry, dreamy-eyed beauty” and they aren’t far wrong. She won an Oscar for Written on the Wind and she could sure act. Westernwise, she was in seventeen, and I particularly liked her in Colorado Territory and South of St Louis, both with Joel McCrea, The Nevadan with Randolph Scott (a cracking good Western), and Jack Slade, in which she intervenes in a saloon fight, saving Jack by blasting the bad guy with a derringer. That’s my kinda gal. In this one she is the sheriff’s wife but the sheriff has lost his nerve and she finds it hard to stand by her cowardly husband. She is drawn to the handsome and courageous Wes, and he, of course, is tempted. 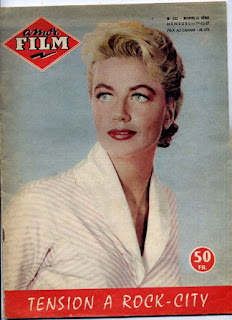 The sheriff in question, Fred Miller (writer Winston allowing himself that little vanity), is Cameron Mitchell. Mitchell was an absolutely first-class Western actor, in my view. Apart from stealing the show as Buck Cannon on The High Chaparral, he appeared in sixteen feature-film oaters, most memorably (for me) in Pony Soldier, The Outcasts of Poker Flat and (especially) Hombre. Here he handles very well the man with the broken nerve who avoids eye-contact with the townsmen. He is “beaten, scared, but too proud to quit.” However, he finally steps up to the plate when he absolutely has to. 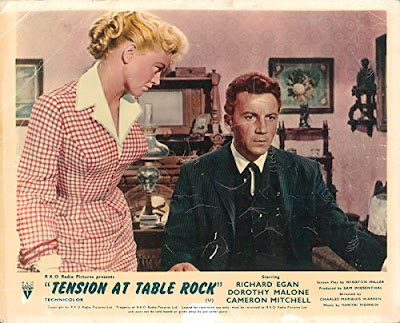 She stands by her man but finds it hard 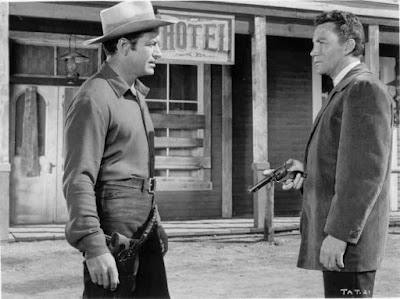 Wes will finally show the sheriff where his backbone is

Early in the movie the stage station where Wes has taken refuge, working his keep, is attacked by robbers who hold up the occupants and wait to waylay the stage (a bit like in Fox’s feature Rawhide in 1951). Wes gets all three but the station owner, widowed and gimpy Ed Burrows (Joe De Santis) is killed. Wes has no choice but to take Ed’s young son Jody to the boy's uncle, Sheriff Miller, and his wife Lorna (Malone) in Table Rock. Now this boy Jody is played by Billy Chapin, and I remark this especially because I thought young Chapin was absolutely outstanding in The Night of the Hunter the year before, one of the best child actors I have ever seen. He’s good in this one, but not as good as that. As the boy and the gunfighter bond you can hear definite echoes of Shane three years before, though this kid is better than Brandon De Wilde’s Joey, I reckon. 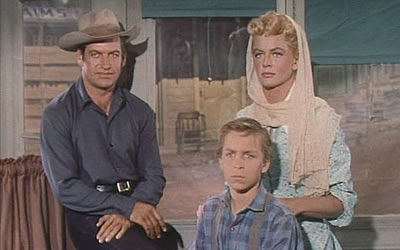 We are reminded of Shane also because Wes is drawn to Lorna, and vice-versa. It is a romance that cannot be, just as Shane’s was with Marian Starrett, but it is subtly done, as it was in Shane. 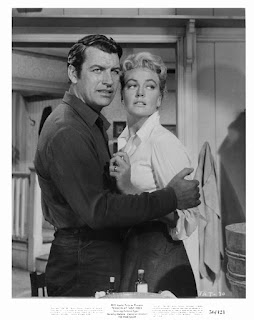 But it cannot be…

The rest of the cast is also very good. Angie Dickinson, in her fifth Western, two years before Rio Bravo, does an early scene where she is spurned by Wes. She vengefully circulates the lie about Wes shooting his friend in the back. 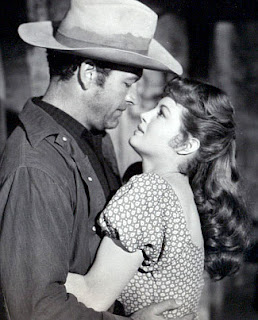 Angie wants him but it isn't reciprocated

We have Royal Dano as a crusading newspaper editor, who gives the boy a job. John Dehner, never less than excellent, is here as Hampton, a tough cattleman, owner of a herd his men are driving to Kansas (men whom the sheriff cannot stop hurrahing the town: they were the ones who beat him within an inch of his life the year before). And Edward Andrews is the slimy and crooked townsman Kirk (there had to be one) who is Hampton’s ally and accomplice. Andrews usually played jovial grandfathers and such, but not here. DeForest Kelley is the professional gunslinger Jim Breck whom Kirk brings in to dispose of the sheriff. It turns out that Wes and Breck go back, are almost friends in fact. 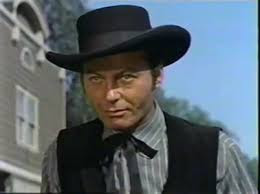 Why does Kirk want the sheriff gone? Well, Wes witnessed one of the drunken cowpokes (habitual villain James Anderson) shoot dead a sodbuster (Joel Ashley) and while the pusillanimous sheriff meekly accepts the story that it was self-defense, Wes knows, and testifies (although his real identity may come out in court, he does it anyway because a man’s gotta do, etc.), that it was plain murder. The homesteader was not even armed. This shames the lawman into finally standing up and changing his statement about self-defense. So Kirk wants the sheriff disposed of. But Wes tells Breck, “You’ll have to go through me.” We know that there will be a showdown between the two gunmen. Who is quicker on the draw? “I always wondered,” says Breck. 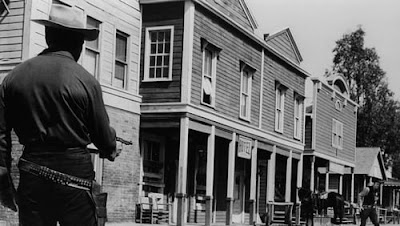 Who will be faster? Guess.

There’s an all-action finale as Hampton and his men ride into town to get their compadre out of jail, and the townsmen finally stand by their man and back the sheriff and his gunman friend Wes.

Like Shane, Wes cannot stay once his work is done and the boy looks with regret at his departing friend and mentor.

I like this Western. I think it’s really rather good.