Better than it should have been

I’ve never been the greatest fan of John Derek in Westerns. He wasn’t the finest actor ever to grace our noble genre. But he wasn’t that bad either. He made five feature oaters and a TV movie, as well as appearing with Chill Wills in Frontier Circus on TV and a couple of episodes of Zane Grey Theatre. We’ve already looked at Ambush at Tomahawk Gap and Run for Cover, and I’ll be reviewing The Last Posse and the TV movie Massacre at Sand Creek next month. But today it’s Fury at Showdown.

It’s a curious film in some ways because it was made on an almost zero budget in only five days, yet is actually really quite classy. A 75-minute late-50s black & white B-Western it may have been but it was thoughtful, dark and very well made. It was directed by Gerd Oswald, born in Berlin, the son of German film director Richard and actress Käthe. He was a child actor before coming to the United States in 1938 and getting a job at Monogram. Later he would work on Rawhide and Bonanza but before that he directed Sterling Hayden in the interesting Western whodunit Valerie (also United Artists) two years before this one. He did a really quite expert job on Fury at Showdown, especially considering the hardly stellar cast and minimal budget. 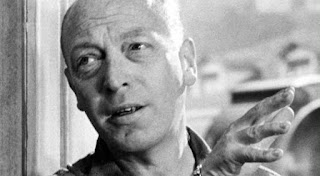 He was greatly aided by his cinematographer Joseph LaShelle, a class act, who did wonderful things with the monochrome, especially the interiors. Some of his work on this picture is the equal of that of Charles Lawton Jr. on 3:10 to Yuma the same year. It’s that strong. And the modern print is very sharp, by the way. There are a few locations (Iverson Ranch) and they are made the most of, but the majority is shot on the RKO-Pathé Western set, which was pretty good in fact. 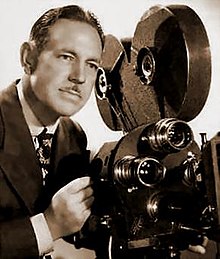 Together, Oswald and LaShelle created a claustrophobic, noirish ‘town Western’ with tension and atmosphere.

We open with low camera angles as watchful townsmen (who will turn into a lynch mob) wait while their tough sheriff (Tom McKee) releases a gunslinger after he has served his time in Buckhorn County Jail. It’s Brock Mitchell (Derek, of course) who gunned down a man who was a wannabe punk but popular with the town, a fellow who tried to outdraw him. The lawman doesn’t like Mitchell one bit but he won’t tolerate lynching either and so we get one of those classic scenes in which he stands down the mob by sheer grit.

Mitchell goes back to his ranch and his mild kid brother Trace (Nick Adams, who would soon be Johnny Yuma on TV). He discovers that Trace has mortgaged the place to local banker Van Steeden (Sydney Smith), against the promise of the railroad coming through shortly and paying out large. This banker is unusual for a Western in that he is not a crook but dignified and rather sympathetic to the two boys, and he does what he can to extend their note, which is due in three days. 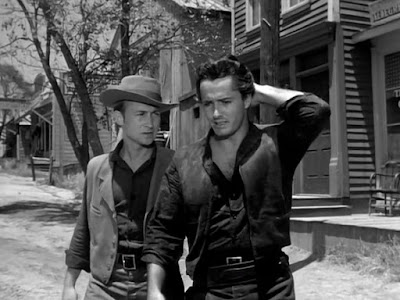 The brothers are worried. How to repay that bank loan?

But he is thwarted by loathsome attorney Chad Deasey (Gage Clarke) who is on the board of the bank and has designs on the Mitchell place. He will do everything to stop the Mitchells paying off that debt, including even hiring a gunfighter/bodyguard, Miley Sutton (second-billed John Smith, from Laramie). Smith is rather good in this, as a none-too-bright but very mean hombre. I didn’t know Clarke – he was only in this and Valerie – but he is excellent as the slimeball crooked lawyer in a fancy vest. In the story he is extra-keen to revenge himself on Brock because the gunman shot his brother (another fair fight, but you won’t convince Deasey of that). 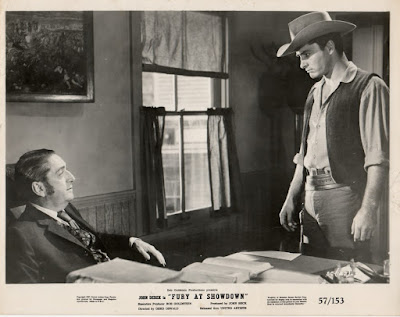 Low-life lawyer out to get angry ex-con

Deasey goads Brock endlessly, eager to provoke him to draw on the fast gun he has hired. The trouble is that while Brock is desperate to live down his past and re-integrate into life at Showdown Creek, he also has what these days would be called anger-management issues. He is very quick to rage, and being both strong and good with a gun, it is all too easy for him to resort to violence. But the local sheriff (Robert Griffin) keeps him on a tight leash. “One more thing…”, he warns. And the townspeople glare at the ex-gunfighter, and stop talking suddenly when he comes in, and the young man’s sense of alienation grows and grows. You’d think that the writer of the source novel had been reading Camus. Camus’s L’Etranger (1942) has always been a notoriously difficult title to translate. A French-English dictionary will give you, for étranger, stranger, or foreigner, but it isn’t that. Outsider is better, or even outcast. That’s what Brock is. 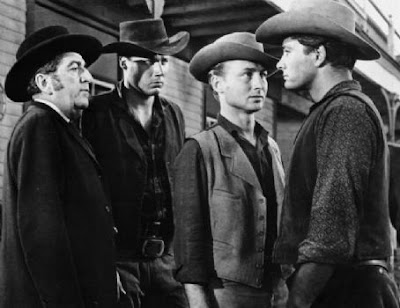 Maybe even the name Brock says something: a brock is a curmudgeonly, solitary creature that it is not wise to bait. 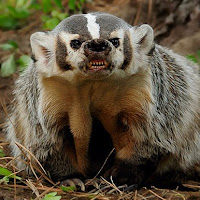 The writer in question, by the way, was Lucas Todd, and though I have not read his 1955 novel Showdown Creek, I am told that it was quite different from the movie in many respects. ‘Lucas Todd’ was the nom de plume of film critic Stanley Kauffmann of The New Republic. 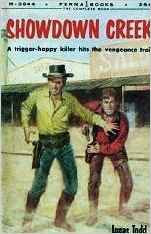 In the movie the younger brother doesn't have a gun 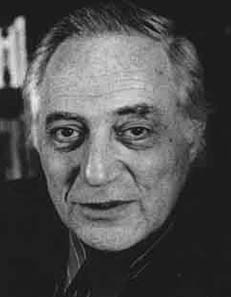 I suppose it could just have easily been called Showdown at Fury. There was a Stagecoach to Fury after all. Punning titles like this were not unknown. Think of Randolph Scott’s Decision at Sundown.

Now, the Mitchell boys team up with two other ranchers, Riley and Norris (Rusty Lane and Malcolm Atterbury) - they all stand to gain if the railroad comes through. But the two farmers dislike Brock and distrust him. “No lone wolfin’,” they say. It’s all together or not at all. So Brock can’t go off to find Phelps, the railroad man, who was supposed to arrive on the stage from Gunstock, the next town, but didn’t. They all stay in Showdown Creek and wait, while the clock ticks down on the moment the Mitchells must repay their debt but can’t. 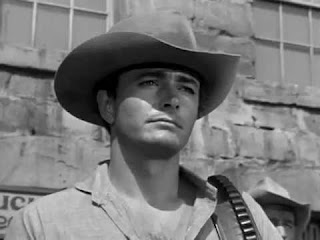 Naturally there has to be some love interest, though to be honest, in this story it’s paper thin, almost perfunctory. Brock loves the sheriff’s daughter Ginny (Carolyn Craig: it would be unkind to call her a nonentity but she certainly wasn’t a huge entity, though she did have small parts in Giant, Gunsight Ridge and Apache Territory). Sad to relate, she shot herself in 1970. Ginny has her doubts about Brock, him being a killer and all, and her dad, the sheriff, doesn’t care for the match at all. There’s a scene in which Brock finds her swimming. No matter how dry the terrain, in Westerns there was always a creek or pool handy for a girl to swim naked in. Of course you only see her shoulders. It was the 1950s after all. 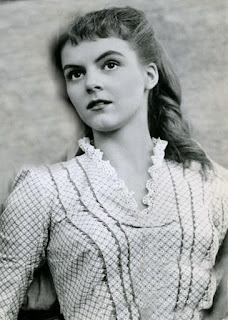 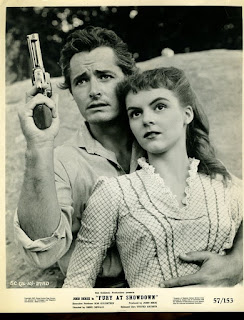 There’s a good bit in which Brock confronts Deasey and his gunman, and Sutton gets the drop on him but Brock throws his own gun through the window and tells the men that if they shoot him now everyone will know he was unarmed. Clever, huh. Another time there’s a fierce fist fight between Brock and Sutton, in the saloon and in the street. It’s well staged, actually, one of the better fights you’ll see. It reminded me a bit of the slugging match in These Thousand Hills, released just the month after Fury at Showdown. 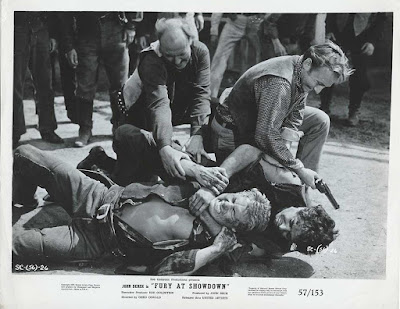 Well, finally Brock convinces the two suspicious farmers to let Trace ride out to Gunstock and see the railroad man Mr. Phelps (Ken Christy). If they can just get a letter from Phelps saying he wants to buy, that will stave off the bank and stop Deasey. Phelps, by the way, is also unusual in Westerns as being a railroad man who is not a grasping crook. Decent and sympathetic bankers and railroad men, whatever next? But Deasey gets wind of this mission and sends his hired killer to follow Trace. Murder most foul looms. As the final showdown draws near, the big question is, will Brock give way to his fury and shoot down the man who killed his young brother, as the skunk deserves, or will he learn restraint and maturity, and let the law take its course? Ah, there’s the rub. 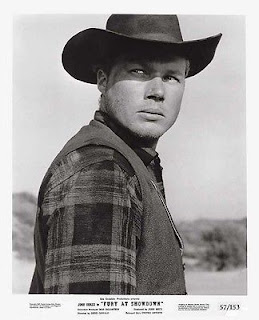 But it’s all skillfully handled and, given the limits of the cast, well acted too. I thought Adams as the brother particularly effective. Kermit Maynard and Buddy Roosevelt did the stunts, by the way. It’s spare and economical – sometimes lack of budget has a positive effect as director and crew are forced to do a lot with a little. The New York Times called it “a surprisingly decent little Western” and said “this unpretentious, low-budget entry is leanly written, tersely acted and, above all, straightforward.” The reviewer went on to say, “Under Gerd Oswald’s sure direction, this tightly authentic atmosphere, the good, blunt dialogue and some discreetly inserted music do much to project the urgency of Mr. Derek’s plight—that of a young man at his life’s crossroads.”

I agree. Worth a look. 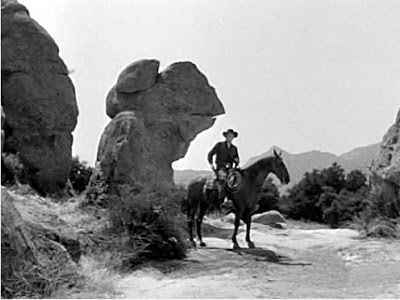 What location shots we get are very good, but most is done in town