Rooster Cogburn without the zip

Brian Garfield called Copper Sky a “black and white Z-movie”. It’s not quite as bad as that, though its two lead actors were unstellar and, honestly, on the weak side. Coming so soon after the classy Tension at Table Rock, which we reviewed recently, it was a big disappointment.

Jeff Morrow was not really cut out for Western greatness. He was Major Bart McClelland in Union Pacific on TV and he was Cochise in an episode of Bonanza but he only did five Western features: he had a smallish part in Siege at Red River in 1954; a bigger one in the Dean Martin/Jerry Lewis ‘comedy’ Western Pardners two years later; he was Jim Bowie in The First Texan, also in ’56; he led the cast in this one; and finally he starred again (if that’s the word) in Five Bold Women, an independent release of 1960, to be reviewed next. I fear Mr. Morrow was not destined to end up on the Western Mount Parnassus (somewhere up in the Rockies). He’s not bad, it’s not that, but he lacked oomph in our noble genre. 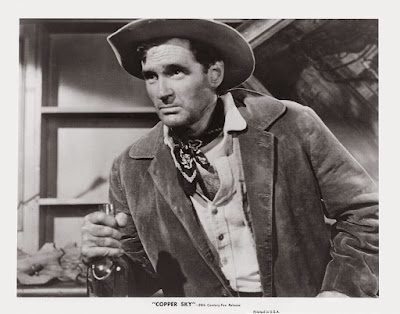 Jeff not really cut out for Stetsons, sixguns and saddles

In Copper Sky he plays a hapless drifter, Hack Williams, in civilian life after a ten-year hitch in the cavalry, who arrives in a New Mexico or Arizona town (somewhere Apache anyway) and sees a person being shot by an Indian. He fires at the brave, who runs off, but when the townsfolk gather, and see him standing over the body with a rifle that has been recently fired, they of course immediately (as Western townsfolk were wont to do) jump to conclusions, assume he was the killer and then, led by a bloodthirsty woman, propose to lynch him on the spot. He is, though, at least given the semblance of a trial, a travesty of justice of course, before being sentenced to hang on the, er, morrow, at sunup. He is incarcerated till then, with Strother Martin as his jailer.

However, while he is behind bars, consoling himself with a bottle that Strother has kindly given him, the Apaches attack and, improbably, wipe out the entire town. They kill everyone, even Strother, everyone that is except Hack, who was passed out in an alcoholic stupor and whom the marauders did not see. We are not shown how he got out of jail but he emerges anyway, showing some glee that “the dog it was that died”, as it were.

Now, meanwhile, a prim and proper schoolma’am from Boston (a type beloved by Westerns) is arriving on a wagon driven by Paul Brinegar (soon to be Wishbone in Rawhide). On the way she has been spouting pious platitudes to the long-suffering Paul (who will though, soon be put out of his misery by a helpful Apache). 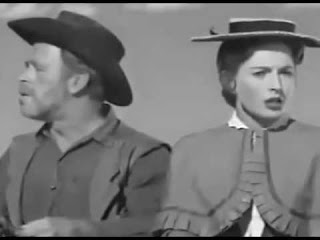 It is Miss Nora Haynes, and she is played by Coleen Gray. Ms. Gray had won a contract from Fox and appeared in quite a few Westerns. She was Fen in Red River, co-starred with Victor Mature in Fury at Furnace Creek, and appeared in Apache Drums, Tennessee’s Partner, Star in the Dust, etc.

Once in town, she immediately proves to be a thorn in the side of the boozy Hack, preaching, praying, prattling and pompously pontificating, if you’ll excuse the alliteration. Ms. Gray was actually quite well cast because she was staunchly conservative in real life and campaigned for a constitutional amendment allowing school prayer.

They decide to leave before the Apaches come back and so we have a kind of African Queen/Rooster Cogburn vibe going, although Coleen was no Katharine Hepburn and Jeff was no Humphrey Bogart or John Wayne. He tries for a Western drawl, not altogether successfully, and he is supposed to be ‘the man who knows Indians’, while she is not only a tenderfoot Easterner but a woman, to boot. She can’t even light a fire and she screams every time a coyote howls. Not only that, she pours away Hack’s whiskey. She is a real trial. 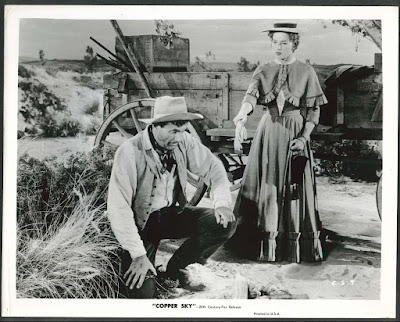 She is a total pain

I noticed, by the way, that the Apaches left behind all the firearms on the street after their massacre. A likely story. One good thing, though, the guns are authentic, for once.

As they voyage through perilous Indian territory, they pass through some nice Kanab, Utah locations, shot in black & white shot by Brydon Baker, though they camp each night on a soundstage in the studio. 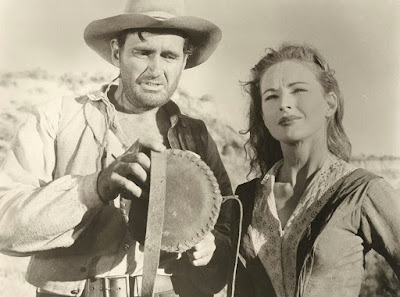 They learn to respect (and eventually love) each other

You can guess the plot development: the antagonistic pair gradually draw close and, under the strains and stresses of their ordeal, come to find true love. It’s as predictable as it is trite, I fear. There’s a particularly sickly moment when, in extremis, he asks her to help him pray, then naturally they are saved (I think Coleen had a hotline) by finding a river in which they immerse themselves (fully clothed, of course) and chastely kiss.

There’s the odd good line, here and there, for example Hack’s retort to Miss Haynes’s reproach “Don’t call me lady”: “Why, ain’t you one?”, but most of the time you just want to shout “Shut up!” at the darned woman. Eventually he does snap as she is whingeing endlessly on while he is trying to listen for approaching Apache, and he yells at her, “Shut your mouth!” Polite, I reckon, considering.

The screenplay was by Eric Norden from a story by Robert Stabler (who was also a producer). Norden and Stabler would collaborate the following year on Cattle Empire, a much better film.

The picture was directed by Charles Marquis Warren, about whom I was talking the other day (click the link for that) and was a production of his company Emirau for Regal Films (in RegalScope, no less) and released by Fox. Warren was capable of some really good work, such as Tension at Table Rock, but he also made some clunkers. 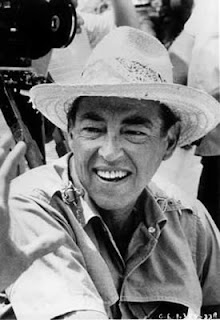 Hack always calls the Apache “redsticks”, perhaps because by 1957 the word “redskins” was thought offensive, I don’t know.

Naturally there is a bathing scene, when we see a daring amount of Ms. Gray’s shoulders and even a bit of leg. Wow.

There are some rather corny heroics at the end, and a very unlikely bit when the soldiers manage to kill an Apache, one trooper yells, “Your chief is dead. Give up!” and they immediately stand and raise their hands in surrender. 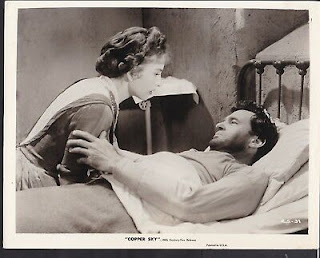 Heroically wounded but he finds love

No, I’m afraid it isn’t very good. With a decent budget, better writing and someone more charismatic in the lead it might have been half-OK but it still probably wouldn’t have been much more than a pale imitation of the original, or as good as the later one.

Eminently skippable, e-pards, and only really watchable by dyed-in-the-wool completists.