Producer Wallace MacDonald, director Fred F Sears and writer David Lang produced a whole series of Westerns in the mid-1950s. Philip Carey led in four of them but they also used David Brian, John Hodiak and Bill Williams. All the pictures were what you might call solid B-Westerns. 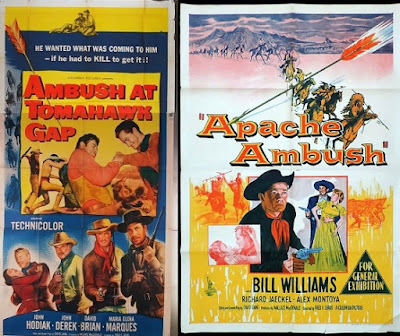 The same but different

So was one a remake of the other?

Nope. In fact the pictures could hardly be more different.

For one thing, Apache Ambush was in black & white while Ambush at Tomahawk Gap two years before had been in bright Technicolor. This was deliberate because as a budget-saving measure Apache Ambush used yards of footage from Columbia’s earlier picture Arizona (an entertaining Western, in fact) from right back in 1940. The modern print on DVD is good, though the Arizona scenes don’t quite match. 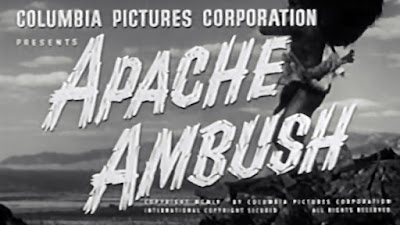 And indeed, Apache Ambush has all the air of a 1940s Western. It’s really quite old-fashioned, whereas Tomahawk Gap had been tougher and more modern in style. Curious, really, given that they had the same team behind them and some of the same actors.

Still, Apache Ambush had a great cast. Bill Williams, Mr. Barbara Hale, led as tough Army scout James Kingston. Williams was of course Kit Carson on TV from 1951 to ’55 but he had a good line in big-screen oaters too, though his strong New York accent didn’t exactly help. This was the first of five Western features he led in. We reviewed another, Oklahoma Territory, the other day. 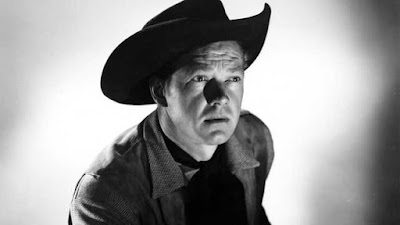 Richard Jaeckel (looking very young, though he had been in Westerns since The Gunfighter and Wyoming Mail in 1950) got second billing, as the bitter one-armed soldier Lee Parker who cannot accept that the Confederacy is finished (what the intro text describes as “The unfortunate American Civil War” has just ended). His dad is the sheriff (Forrest Lewis) and his sis, Ann (Adelle August) is in love with Kingston. Well, you gotta have some love interest. 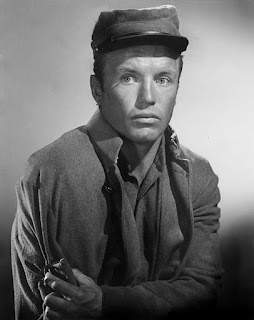 Alex Montoya plays the bandido Joaquin Jironza who wants for his own purposes the hundred Henry repeating rifles that Lee and other Rebs covet to resuscitate the Confederate cause. I don’t remember Montoya much though apparently he was one of the villagers in The Magnificent Seven. His saucy girlfriend and spy is Rosita, played by the mononymic Movita, Mrs. Marlon Brando 2, who had a part in Fort Apache. This was her last film. 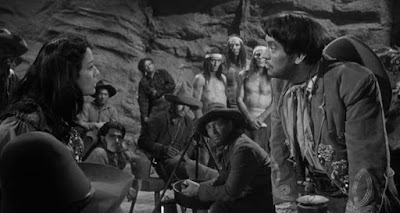 Rosita and her bandit boss

Ray Teal, always reliable as either goody or baddy, has another entertaining part (as he did in Tomahawk Gap) as the sergeant and sidekick of Williams. Ray and Bill are interviewed by Abe on the very day the president will be assassinated (in fact Lincoln goes straight from talking to them to Ford’s Theater) and, oh good, he is played by James Griffith, a favorite. 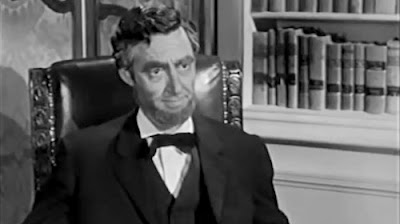 You see, though you probably didn’t know this, it was Lincoln who masterminded the idea of driving cattle up from Texas to the railhead at Abilene. Yes, really. And he got Bill and Ray to do it. (For some odd reason, they decided to go via Arizona). 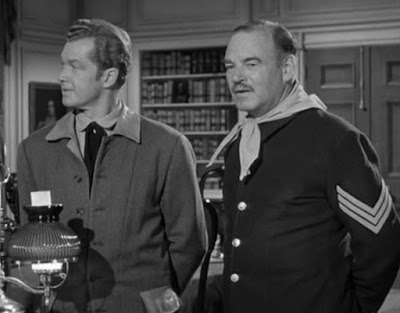 Scout Bill and Sergeant Ray get their mission from the president

Tex Ritter and Ray ‘Crash’ Corrigan have parts as non-comic, non-singing characters. In fact Crash is the one smuggling those Henrys. He falls to the combined assault of Apaches and bandidos. Tex is only barely glimpsed as Crash’s partner Traeger; I’m not quite sure why he did the picture. This was his only on-screen appearance in a fifties movie.

Then we’ve got, in bit parts, George Keymas, Iron Eyes Cody (as the Apache chief, natch), big Bill Coontz, Harry Lauter, Kermit Maynard and Clayton Moore - Clayton in the key role of ‘Jironza Cave Sentry / Townsman (uncredited)’. The picture was filmed just after Moore had been (temporarily) fired from The Lone Ranger, though by the time it was released he was back in his mask riding Silver.

Come on, it ain’t a bad line-up. You can have good fun actor-spotting. Bill and his beloved confront angry Reb Richard and his dad

They get to the town of San Arturo but stupidly post no guard on the rifles, doh, and of course the Henrys disappear. Who’s got ‘em? The bandits? The Rebs? Ah, who knows? Anyway, there’s lots of action as Apaches attack the cattle drive but of course are beaten off by the goodies. “I’ll be waitin’,” says Ann, as her loved one rides off into the sunset to drive them steers to Abilene.

Producer Macdonald and director Sears had both began as actors in Westerns. MacDonald started in films in 1914 and appeared in almost 120 motion pictures between then and 1932. He tried screenwriting but eventually settled on producing, making well over 100 films between 1937 and 1959.

Wallace in his younger days

Sears was hired as a dialogue director by Columbia Pictures in 1946 and began playing bit parts in the studio’s pictures, as Fred Sears, gradually receiving larger roles, notably in the long-running Charles Starrett Western series. By 1949 Sears was so well established in the close-knit Starrett unit that he was allowed to direct, and he continued to helm the Starrett oaters, as Fred F. Sears, until the studio retired the series in 1952. Fred’s speedy shooting and budget-stretching skills attracted the attention of Columbia staff producer Sam Katzman. His most famous films were probably Bill Haley musicals like Rock Around the Clock and schlock sci-fi like Earth vs. the Flying Saucers but he did loads of Westerns, with various producers. He has quite a following.

Fred as actor and director

Writer David Lang worked on wagonloads of Western TV shows but also contributed to more than a dozen feature oaters from Northwest Rangers in 1942 to The Hired Gun in 1957.

Apache Ambush is typical of the clichéd but fast-paced and actionful MacDonald/Sears/Lang Westerns of the time and it repays a watch. Of course anything with Apache in the title was bankable, as Apache Blood, Apache Drums, Apache Rifles, Apache Territory, Apache Trail and Apache Warrior, to name but a few, attest. 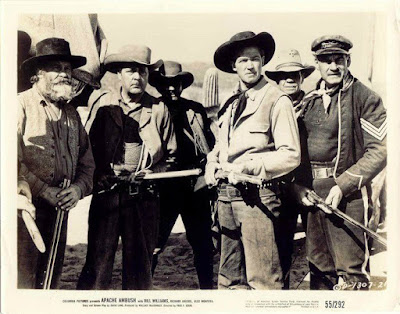 They have to fight Apaches, Rebs and bandidos, all at the same time