The other day we were talking about Al Jennings (left), looking at the silent Western he made in 1908, The Bank Robbery. I said then that he was a very colorful character, a highly-skilled self-publicist and what today would be called a celeb, and like many modern celebs, his only real claim to fame was, er, fame. After a picaresque but much inflated career as outlaw in Oklahoma, then as an unsuccessful politician and indifferent writer, he fetched up in Hollywood, where he busied himself with the world of the motion-picture Western, perhaps an ideal environment for a man who blended fact with fiction all his life.

The first, in 1914, was a film version of his self-laudatory ‘biographical novel’ Beating Back, in which he starred. His company then made three oaters in 1917 in which he did not appear and the year after that he and his brother Frank starred in Lady of the Dugout, a three-reeler directed by WS Van Dyke. Leading roles in thirteen Western shorts followed, then a smaller part in two Jack Hoxie features in the mid-20s. In 1930 he entered the world of the talkie with a part in a Bob Steele picture, The Land of the Missing Men. In 1936 he would (ironically) play the judge in a Tex Ritter flick, Song of the Gringo, which he also co-wrote, and his last appearance on the silver screen was as Townsman (uncredited) in James Cagney’s 1939 Western The Oklahoma Kid (he probably thought he should be playing the lead role). 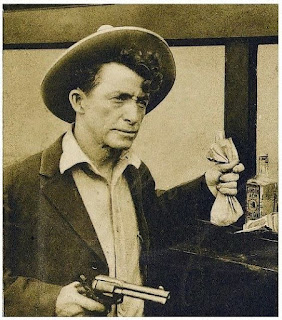 He liked holding up banks. Rather a small sack of swag, though.
In the 1940s Jennings supported the claim of another fraud, J Frank Dalton (1848-1951), who said he was the real Jesse James. Dalton's assertion proved to be phony and anyway Jennings had never met the real Jesse James, who was killed in Missouri in 1882 well before Al embarked on his criminal career. 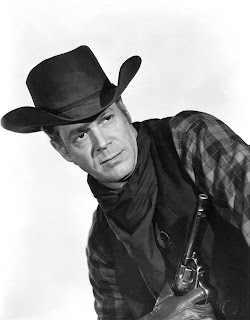 The first thing to say is that is highly fictional, verging on the preposterous. But then Jennings’s whole life was that.

It just deals with the Oklahoma outlaw days, ending with his release from prison and pardon by President Theodore Roosevelt in 1904.

It opens with Civil War footage. We are in 1863. Confederate Major Jennings is defeated and returns to his home in Coldwater, Kansas, to his pregnant wife. Three blond sons wait outside the house, banished while their mother gives birth. A woman appears, what would in 1951 have been called a Negro maid (or worse) and announces that the cry the boys hear is a Rebel yell and prophesies that “He’s gonna have a powerful temper when he grows up.” The baby is, of course, Alphonso.

Daddy becomes a judge. Naturally, because it’s Raymond Greenleaf. I counted on IMDb the times he played a judge. 18! And when he wasn’t judging he was a doctor (13) or a preacher (11).

His sons Frank, Ed and Al grow up and become lawyers, all of them. Frank (Dick Foran) and Ed (James Millican) are steady enough but Al is a real firebrand, always losing his temper and being held in contempt of court.

In the end he leaves Kansas for Woodward, Oklahoma, with Frank (Ed is already there) and the three brothers set up a law office together. 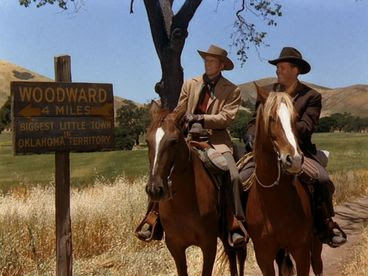 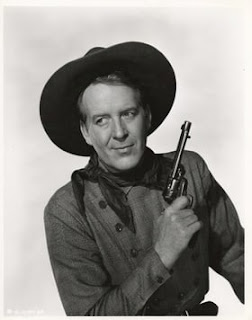 On the way he saves a fair maid, Margo, in a runaway wagon – a standard Western trope. He (or his stunt double anyway) leaps from his horse to the back of the wagon horse. Margo will, natch, become his paramour. It’s Gale Storm (Josephine Owaissa Cottle) who had played opposite Duryea the year before too, in The Underworld Story, and who had started in Westerns with Roy Rogers in 1941, doing eleven altogether, her ‘biggest’ probably being the George Montgomery version of The Texas Rangers, released six months after Al Jennings. 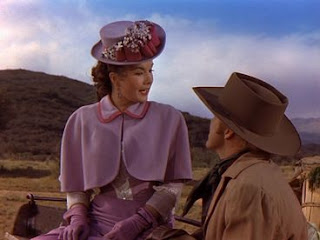 Next Guinn ‘Big Boy’ Williams happens along, in a buggy and wearing a suit and derby. He cheerfully pulls out a gun and attempts to rob Al and Frank. Al shoots the gun out of his hand, though. Jennings made much of his amazing marksmanship, though those who knew him said that in fact he couldn’t hit the side of a barn from inside. Al generously lets Big Boy go, but keeps the pistol. 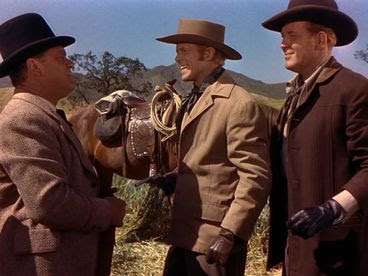 The Jennings boys get the drop on Guinn 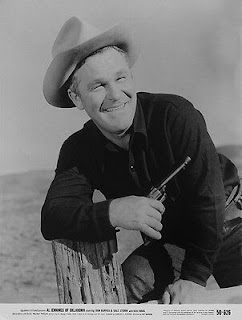 Now we get the Temple Houston bit. Well, the script was too mealy-mouthed to i/d Houston as the lawyer who shot and killed Ed Jennings in a Woodward saloon. He’s named ‘Tom Marsden’. But good news: it’s John Dehner. Houston/Marsden loses a case to Ed and Al assaults him, so he walks into the saloon where Ed is playing cards and shoots him. The local marshal (Stanley Andrews) arrests him but in a trice he is out on bail. This makes Al see red. He goes to Marsden’s home and kills him when Marsden goes for a hidden gun. Marsden’s henchman Mertz (Bill Phillips) lies about this to the local law, saying it was cold-blooded murder, and so Al and Frank are obliged to go on the run. Thus begins Al’s career as an outlaw. 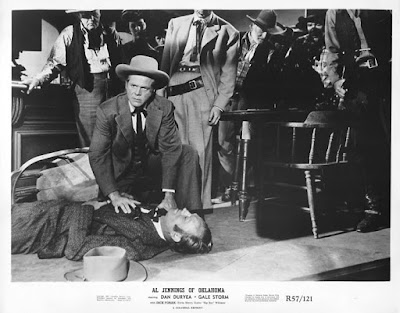 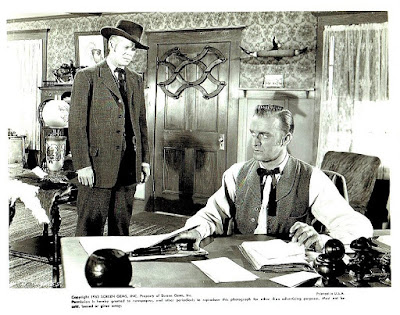 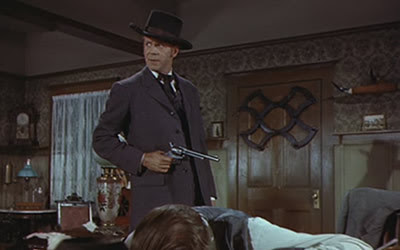 The marshal’s posse chases the fugitives. “Pete, Tom, Hank,” orders the lawman, “Cover the hills and the back country!” Yes, I’m afraid the writing is that clunky. George Bricker wrote the screenplay, with input from Al Jennings and his ghost-writer Will Irwin. Bricker only wrote three Westerns, and it shows somewhat.

Now Al and Frank come across a ranch, the Diamond B, where they get work under false names and can hide out. But the cowboys there are rustlers and robbers. These fellows discover a WANTED poster and thus the Jennings boys’ true identity. So the brothers are forced into crime, you see. They had no choice. Soon, Al becomes the leader of the gang because of his daring and skill. The railroads suffer “huge losses”, we are told. In reality Al Jennings was an extraordinarily inept robber, once using too much dynamite, Butch Cassidy style, and destroying the whole car and its contents, another time netting only a bottle of whiskey and a bunch of bananas. And his outlaw career only lasted for the summer of 1897. But that wouldn’t make a very good Western movie.

The price on their heads goes up and up, until you’d think the brothers were Jesse James and Billy the Kid.

But the pursuit is too hot. The fair Margo has gone to New Orleans, so Al decides to join her. There’s no extradition down there. But a railroad detective (John Ridgeley) recognizes them in The Big Easy, and they are obliged to flee once more. It’s back to the Diamond B, for “one last haul”. 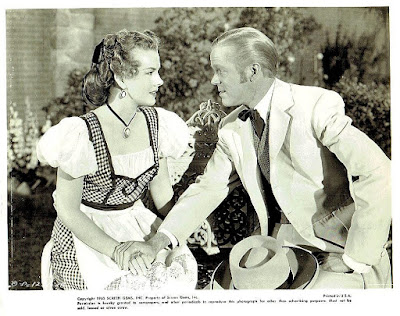 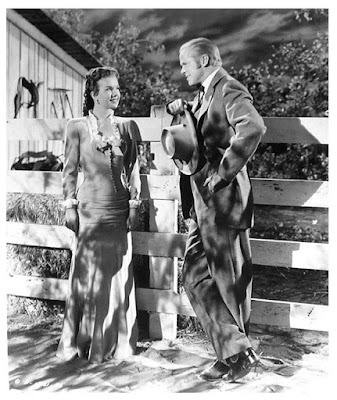 Romance in the moonlight Al and his real wife, Maude

There’s mucho gallopin’ and shootin' but in the end Al breaks a leg and is taken. His dad, the judge, defends him but it’s no good. He gets sent down for manslaughter, life in the Ohio State pen. 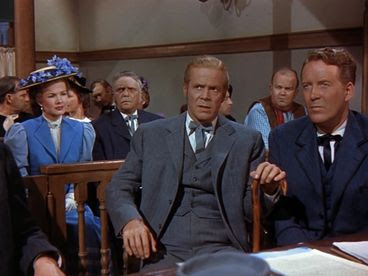 Five years later he limps out, pardoned by the President. Actually, he was freed on technicalities in 1902, after three years, and received the pardon in 1904. But we don’t want to be picky. Dramatically, the film’s way is probably better.

Duryea’s performance is pleasant enough but as a Western the picture is pretty routine and unremarkable. Director Ray Nazarro was something of a Western specialist. He had been assistant director on Columbia oaters for years, then directing himself from 1945 on. His pictures were all Bs. He did a lot of singing and comedy Westerns, Charles Starrett and Ken Curtis ones. After Al Jennings he would helm a few with George Montgomery, Rod Cameron, Rory Calhoun and Sterling Hayden, which were about the nearest he got to A-pictures. Certainly they were his best. He knew his business but had little in the way of flair. 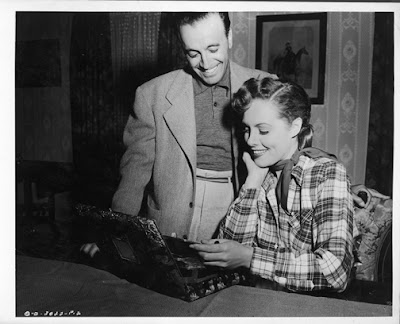 The trailer and posters naturally made the most of the “true story” angle. “The real true-to-life story” the trailer calls it. “The real and violent story of the last of the great outlaws”, it says on one poster. Great outlaw, my foot. True story, ditto. Oh well. 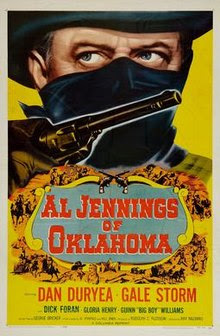 I spotted James Griffith and Myron Healey in bit-parts, so that’s something. It’s in nice Technicolor, and I watched it on a Sidonis-Calysta DVD. This series is a bit annoying: it has French subtitles you can’t turn off, you can’t search their catalogue unless you know  the French title of the movie (and French titles are often very silly, bearing no relation to the original; this one is La Loi du Colt), and there are incredibly waffly commentaries which you watch and then realize the ‘experts’ haven’t said anything at all and have taken five minutes saying it. However, on the other hand, they do choose some good Westerns, often not available elsewhere, and they do always have excellent picture quality. 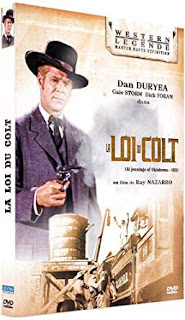 The DP was W Howard Greene, who was nominated for an Oscar seven times, including five straight years from 1940 to 1944, so that’s pretty impressive. He worked on Fox’s Jesse James and Columbia’s The Violent Men, both very good Westerns visually.

There were 112 Westerns released in 1951 (oh, happy day) and this one was certainly not in the top league. You had the likes of Westward the Women, Only the Valiant, Vengeance Valley, Fort Worth, Rawhide, and many other good ones. But Al Jennings of Oklahoma is harmless, and mildly entertaining.