In 1956 Rory Calhoun and agent/producer Victor Orsatti set up a company, Rorvic Productions, to make Westerns. It didn’t last too long but there were a trio of Western features, a couple of TV films and the series The Texan on CBS. The Hired Gun was the first fruit of this collaboration. Like most of Rory’s oaters, it’s quite good. 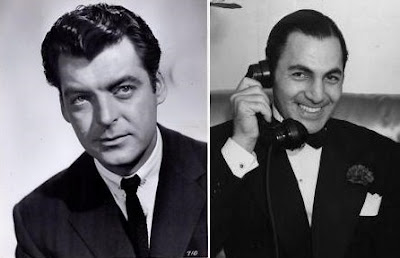 Visually, it’s very attractive. Though in black & white, it benefited greatly from cinematographer Harold J Marzorati’s excellent use of CinemaScope and also of the splendid Lone Pine locations. Though the story is set at different times in Texas, Mexico and New Mexico, it’s all really California, but it doesn’t matter. It’s so ‘Western’ and the terrain is perfect. Marzorati wasn’t a Western specialist (he only shot three) but he did a fine job on this one.

It was directed by good old Ray Nazarro, who also helmed the other Rorvic Calhoun Western of that year, Domino Kid. Nazarro had been a Columbia stalwart, churning out B-Westerns, especially Durango Kid ones, for years before moving to TV and working especially on Fury, Annie Oakley and Buffalo Bill Jr. He was, if not a great artist, a pro who knew the business inside out. 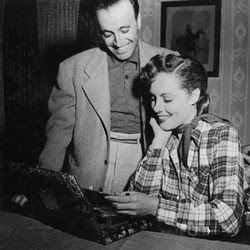 The two writers were also experienced hands, Buckley Angell and David Lang, who did mostly TV work but also the occasional feature B-Western. On The Hired Gun they did a competent job, managing to bring in a little tension and even some character development.

The leading lady was Anne Francis. We Westernistas probably think of her principally as Liz Wirth in Bad Day at Black Rock two years before this. She was also featured with Clint Walker in More Dead than Alive in 1969 and in the (dreadful) 1972 Pancho Villa, the one with Telly Savalas (and Clint Walker again). But she was no specialist in the genre, by any means. In The Hired Gun she opens proceedings when we see a noose and as a voiceover she tells us that she is about to be hanged, the first woman ever to suffer that fate in Texas – and she is innocent. 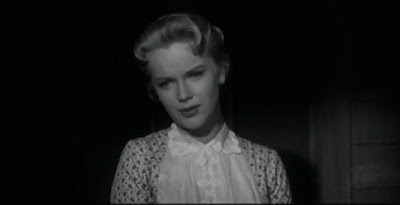 However, she escapes that gruesome destiny thanks to a preacher (Chuck Connors) with a derringer secreted in a bible. Now, dear e-readers, come on. Where have you seen that before? Yup, that’s right, the plot device would be used at least twice again, by Revd. Dwayne Hickman in Cat Ballou and Revd. Robert Mitchum in 5 Card Stud. Fair enough. An excellent plot device it is. 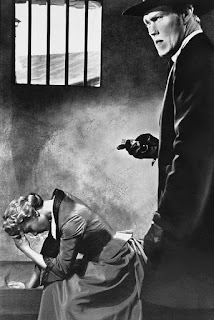 Revd. Chuck has a derringer in a bible

So Revd. Chuck spirits Ellen (Francis) away to New Mexico, and a judge declines extradition on the grounds that the ‘proof’ of her guilt is circumstantial at best. This does not please big (and ruthless, obviously) rancher Mace Beldon (our old pal John Litel) because you see it was his son whom Ellen was accused of killing, though the two were married. He wants Ellen’s blood. And equally bloodthirsty towards the escapee murderess is Mace’s other son, Kell Beldon, played by Dr. Ben Casey. Vince Edwards actually did four Western features. He was Hiawatha in 1952, and the same year as The Hired Gun he would appear in another Calhoun Western (though not a Rorvic one), Ride Out for Revenge. In The Hired Gun he is evidently a bad egg, you can tell that from the get-go. In fact, you say, as you watch, 'I wouldn’t be surprised if he was the one who killed his brother' (half-brother, it turns out) and, if I may be allowed a spoiler (because it isn’t one really) if you say this you will be proved in the last reel to be not that wide of the mark. 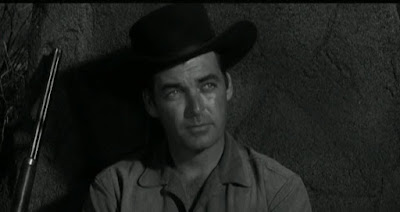 It’s only now that Rory comes in. Rancher Mace decides to cut to the chase and hire a gunman to get Ellen back rather than bothering with annoying details like law. He recruits feared gunslinger Gil McCord for $5000 down in Santa Bella, Mexico. Now, with a title like The Hired Gun and Rory being a gun for hire and all you may think that’s a bit rum for a hero but it’s alright, Gil’s a goody really. Plus, they deputize him so he has a badge. That way, if he shoots Chuck or something, he’s within his rights. Anyway, he nips off to New Mexico and hires on as a cowpoke at round-up time on the ranch where Ellen is living, though he doesn’t seem to do much cow-punching.

Chuck (who’s a foreman, not a clergyman) loves Ellen but she isn’t interested. This will lead to tension, especially when a handsome man in black turns up (Gil). Chuck is jealous as well as suspicious. We see right away that Ellen will fall for Gil and, we wouldn’t be surprised, vice probably versa. And so, dear reader, it pans out.

On the journey back to Texas Gil and Ellen will have to face many dangers, Indians, for example, as well as the pursuing Chuck. Gil is able to deal with all the threats, with a little help from Ellen.

When they get back, Guinn ‘Big Boy’ Williams will have a much-delayed role as a drunken scoundrel and false witness but Rory will punch him out OK.

On the trip, though, MGM indulged in that annoying habit they had of ruining perfectly good location shooting by having their stars in close-up shot in a studio against a back-projection of the location scenery. Why did they do that so much? Was it cheaper? I wouldn't have thought so. Oh well. 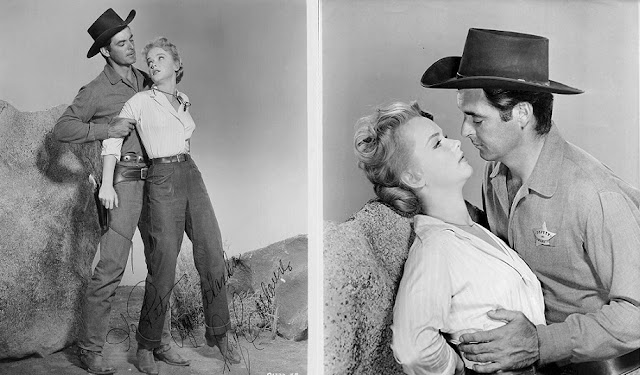 They also used speeded-up film, a particularly crude technique from B-Westerns meant to increase drama, action and excitement but in reality only looking silly.

Will Gil believe Ellen when she says she is innocent? Will be deliver her into the hands of the ruthless rancher who is paying him? Will the real killer be unmasked? Will Gil and Ellen live happily ever after?

Brian Garfield called this Western “dutiful and ordinary” and I suppose he had a point but I like it rather better than that. It’s a bit predictable but it’s brisk, visually fine, has a strong cast and the DVD is good. It might not quite have deserved its three-revolver rating but I'm a bit of a Rory fan. And there was the derringer.

According to Dennis Schwartz, “Shortly before the film was released, Confidential magazine, the scandal tabloid, had run a story about Rory's record as a juvenile delinquent. Its source of information was rumored to be Universal, which gave up lesser star Rory as a trade-off to protect a juicy story about superstar Rock Hudson that the magazine was planning to run. Rory admitted it was true and his career resumed uninterrupted.” I tell you this on a need-to-know basis. 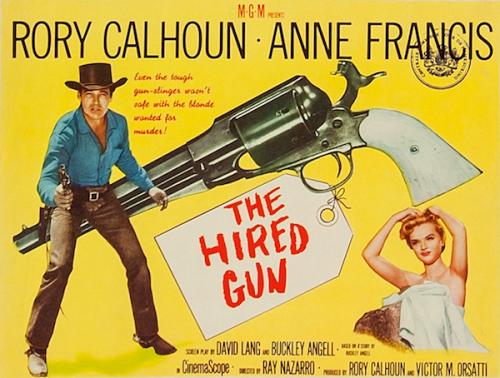