Unless you count the 1945 short Star in the Night, The Duel at Silver Creek was Don Siegel’s first Western (and his first film in color) and it paired Stephen McNally with Audie Murphy, starring also Faith Domergue and Susan Cabot as female leads. 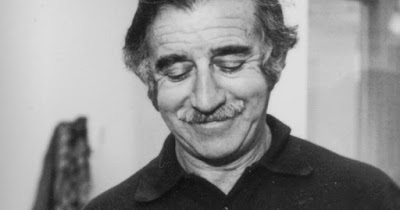 Siegel, who had already won two Academy awards for shorts he had made at the end of World War II, and was also an editor of talent (he did the montage on They Died With Their Boots On) still spent most of the 1950s making intelligent, crafted but, honestly, B-movies like Riot in Cell Block 11 and Crime in the Streets. Later he would make A-pictures and in the Western genre he directed Elvis Presley’s best movie, a good Western, Flaming Star. He had a long professional relationship and personal friendship with Clint Eastwood, who has often said that everything he knows about film-making he learned from Siegel. Siegel produced The Legend of Jesse James on TV, and also for TV directed Stranger on the Run with Henry Fonda. Death of a Gunfighter with Richard Widmark wasn’t a great success, and Two Mules for Sister Sara, with Eastwood, was pretty bad. Apart from Flaming Star, it wasn’t, in fact, a very distinguished Western record as director. But all could be forgiven, of course, for his splendid The Shootist with John Wayne in 1976, his, and Duke’s, last Western. Siegel’s first full-length feature oater, The Duel at Silver Creek, was flawed, flashy and essentially rather trashy, in a Samuel Fuller kind of way. 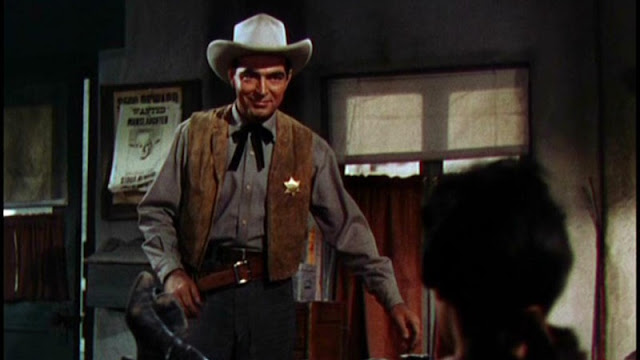 McNally is the marshal

McNally, billed third after Murphy and Domergue, had first appeared in a Western as James Stewart’s evil brother Dutch Henry Brown in Winchester ’73 in 1950, and Universal had then tried him out as a lead. He topped the billing in Wyoming Mail, Apache Drums and The Stand at Apache River. But though he wasn’t too bad, he was basically found wanting, and he was relegated to support roles, often as bad guy (for example with Audie again in Hell Bent for Leather), then TV. In this one he plays the lawman trying to track down a gang of claim jumpers who hires on slick gunman the Silver Kid (Murphy) as deputy. Unfortunately his character is rather a dolt, falling hook, line and sinker for the wicked dame (Domergue), not listening to reason and generally almost ruining everything. He has a voiceover commentary role, which adds to the slight gangster-noir vibe. 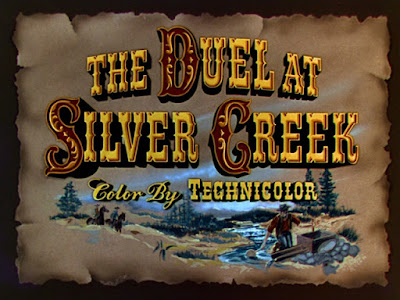 Audie was still in the early stages of his Western career. He had signed for Universal in 1950 and made several ‘kid’ pictures: he was the young Jesse James in Kansas Raiders; a surly young son in Sierra (with his new wife Wanda Hendrix); he was Billy the Kid in The Kid from Texas; and then he was a young Bill Doolin in the Budd Boetticher-directed The Cimarron Kid a few months before Silver Creek. In Silver Creek he still looked incredibly baby-faced but he hadn’t really found his acting feet yet. It is hardly a magisterial performance, though he does come across as earnest and doing his best. He does look a bit silly in his 50s flappy pants and two-gun rig. 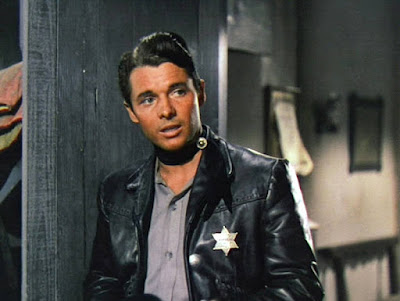 Domergue had started as a, how shall we say, protégée of Howard Hughes, who signed her to his studio RKO, as Faith Dorn, but once their affair was over, in 1943, she reclaimed her real name, which for some reason she always insisted be pronounced demure, and became a star with Vendetta, then made the noir Where Danger Lives with Robert Mitchum in which she played a homicidal femme fatale (perhaps that was why she was hired as ruthless schemer in Silver Creek). She made quite a thing of Westerns in the 50s. Silver Creek was her first but she also did The Great Sioux Uprising with Jeff Chandler, Santa Fe Passage with John Payne, and Escort West with Victor Mature, also making appearances in Western TV shows. In Silver Creek, dressed up to the nines, she establishes her femme fatale credentials right away by garroting a wounded man to death on her first appearance. Ooo, that’s bad. 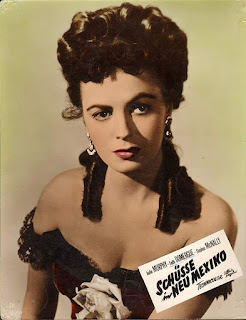 She isn't very demure in this one

Cabot, future Wasp Woman for Roger Corman, plays the jeans-wearing tomboyish ingénue in Silver Creek. She had appeared, as an Indian, in Universal’s Tomahawk in 1951 with Van Heflin and would do a trio of Audie Westerns in the early 50s (Gunsmoke and Ride Clear of Diablo were the others) as well as oaters with Joel McCrea (Fort Massacre) and, as an Indian again, with John Lund & Jeff Chandler (The Battle at Apache Pass). In Silver Creek she is the girl Dusty, who sighs over Marshal McNally but he hardly even sees her (he tousles her hair every time they meet, as if she were a dog). It’s the young deputy who falls for her but she in her turn can hardly see Audie, besotted as she is with the marshal. Still, it all comes right in the end. 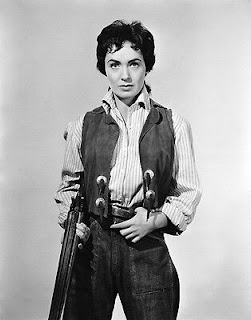 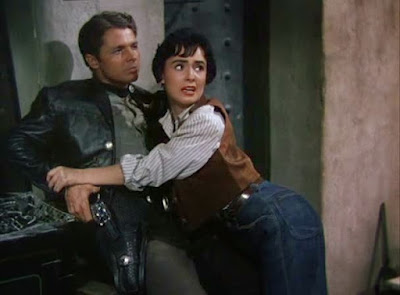 It will (eventually) be lerve

Lower down the cast list we have Gerald Mohr as the chief baddy, consort of Domergue (I mean Demure). You know Mohr, a specialist villain who looked vaguely like Humphrey Bogart. Though he did mostly TV shows as far as Westerns go, he did appear (usually as villain) in some feature oaters, of the B-ish persuasion, such as Bad Men of Tombstone, Wyoming Mail, Montana Territory, Raiders of Old California and a few others. He’s quite good as the nasty leader of the gang who smilingly pretends to support the marshal.

Lee marvelous. When was he anything less?

Eugene Iglesias is the Mexican gunman Johnny Sombrero, Lee Marvin is the saloon thug Tinhorn - his poker game with Audie is superb, James Anderson is Ratface, the gunslinger from Tombstone. You can see by the character names that we are in pretty lurid gangster-western territory. McNally is Lightning Tyrone, so-called for the speed of his draw, and Audie of course is the Silver Kid. In fact you do wonder if the whole thing was done a bit tongue-in-cheek. Was Siegel making a deliberately sensational B-Western? Much of the action, and also the script, would indicate that he was almost sending the genre up. Even the title is rather B-Westernish: there were Duels all over the place, Gun Duel in Durango, Duel in the Sun, Duel at Diablo, and so on. 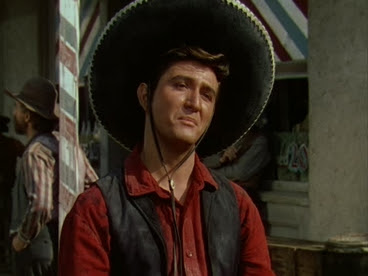 Iglesias's figure verging on the ridiculous

We open with the gang of claim-jumpers, whose game is to get prospectors to sign over their claims at gunpoint, then murder them in cold blood so they can tell no tales. One of their victims is the Silver Kid’s dad (our old pal Harry Harvey), so of course the Kid seeks revenge. He gets one of the bad guys and finds he is wearing a turquoise medallion. This will prove a clue.

He gets into a poker game in the saloon with Tinhorn (Marvin), who accuses him of cheatin’ and it leads to gunplay. But Marshal Tyrone is impressed with the speed of the boy’s draw and instead of arresting him, hires him on as a deputy. You see, the marshal has a problem. He was shot while leading a posse against the gang and though his wound has healed and his eponymous quick-draw is unimpaired, his trigger finger is paralyzed and he cain’t shoot. So, keeping this secret, he needs someone handy with a six-gun. 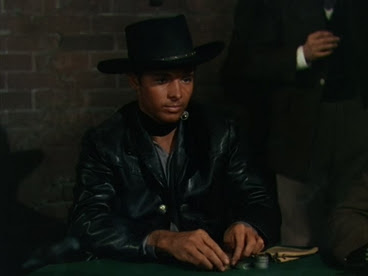 While Lightning was away at Fort Lowell getting treatment for his wound, the old-timer deputy he left in charge, Pops (Griff Barnett) was brutally slain, shot in the back and left in the rainy street. Who did this dastardly deed? When he gets back, the marshal likes Johnny Sombrero for it. Or was it Ratface?

It’s one of those Westerns where everyone gallops at full speed all over the place. No posse can simply gather and ride out of town; they have to gallop out. Ditto the gang. Also Audie. In fact everyone. Usually they do this while shooting, much of it in the air, as they so often did in bad Westerns. It serves no purpose whatsoever but may have been fun for the extras. When dismounted, in the (frequent) gun battles, they ‘throw’ their shots, as if that might make the bullets go faster. Honestly, it’s all a bit cheesy. But maybe that was the point.

Well, there’s much plotting and skullduggery, double-crossing galore, a very Samuel Fullerish Main Street showdown between Lightning and Johnny Sombrero, and it all climaxes in a big shoot-out at the gang’s lair (in which McNally finds himself once again in a gunfight in the rocks but this time on the side of the goodies). The baddies are all killed or surrender and Audie gets the girl (Cabot, of course; it’s RIP for Faith). It’s routine and predictable, but it’s vigorous, fast-paced and done with gusto. Siegel was good at moving-camera shots and unusual angles, and this gives interest. 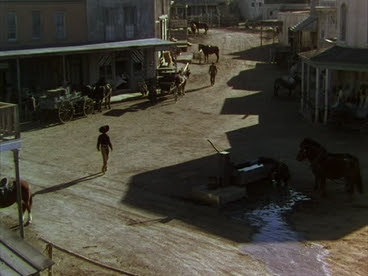 Good aerial shot of the showdown 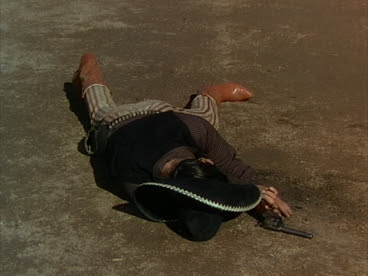 Much of the blame (or credit if you like the picture) must go to Gerald Drayson Adams, who, with some additions from Joseph Hoffman (Tall Man Riding, Rails into Laramie, The Lone Hand), wrote the story and screenplay. Adams was a former business executive and literary agent who was educated at Oxford University in England (and Siegel went to Cambridge so it was quite an educated outfit), and began writing for the screen in the mid-1940s. He started on The Plunderers (the Rod Cameron one) in 1948 and would later do the likes of Flaming Feather, Wings of the Hawk, Taza, Son of Cochise and The Gambler from Natchez, as well as many TV shows. The dialogue of Silver Creek heightens the lurid tone. 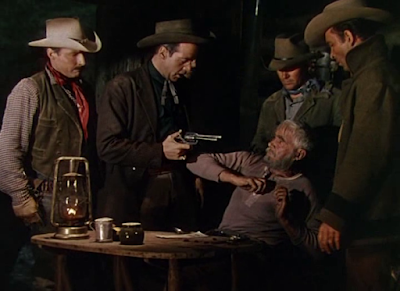 Mohr leads the murderous claim-jumpers, skunks, the lot of them. Actually, this frame has an almost old-master look about it. That prospector could be an Old Testament prophet by some Renaissance artist. If they had Colt .45s in the Renaissance.
Which they didn't.

It’s all in bright Technicolor, shot in the usual Iverson Ranch and Vasquez Rocks locations by Irving Glassberg, of Bend of the River fame. Universal did not stint on this aspect and their 50s Westerns were often very good-looking. There’s also chirpy, even stirring music by Hans J Salter and Paul Sawtell, among others. Brian Garfield called the picture “implausible, predictable and dull”. I probably agree with the first two adjectives, but it isn’t dull. The DVD Talk review said it was a "film too silly to be any good and too unpretentious to dislike", which is quite astute. I'm not sure if I should have given it three revolvers. Maybe I was too generous. In the last resort, if Siegel’s Invasion of the Body Snatchers was schlock horror, this is a schlock Western. 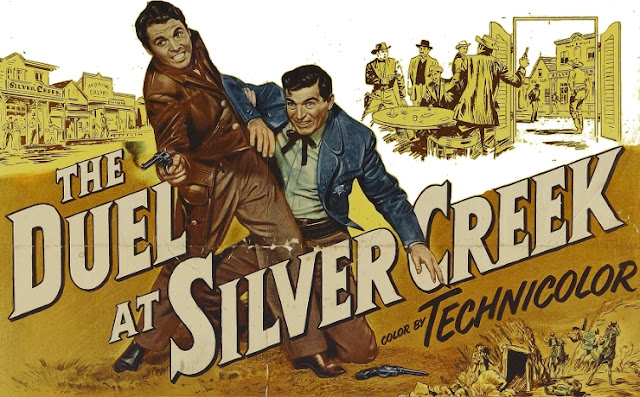