I was rooting for the horse

At some point in their careers most screen cowboys did the capture-the-wild-stallion plot. We think of Dale Robertson in Gunfight at Black Horse Canyon or Audie Murphy in Sierra, or many others. It goes right back to William S Hart, who captured a fine stallion in The Narrow Trail (Paramount, 1917) – it was Fritz, of course. Joel McCrea did it three times, no less, in Cattle Drive, Black Horse Canyon and Mustang Country. I suppose a splendid wild horse, freely roaming the prairie, was a fitting symbol for the Western. The trouble is, all they ever wanted to do was capture it. As soon as they see a noble animal running free, their only desire is to pen it in and break it. It makes me cross. I’m always on the horse’s side and hope it will escape captivity, but it never does. I suppose it’s part of the macho culture, man v. wild beast, and the Western hero has to dominate the poor animal. Sometimes, as in George Montgomery’s stallion-plot Western, King of the Wild Stallions, they even want to shoot it. As if the very freedom and splendor offend them. 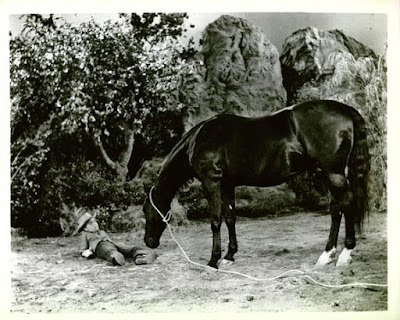 Leave the splendid creature be

Montgomery was getting towards the end of his big-screen Western career by this stage. From October 1958 to April ’59 he was busy in Cimarron City. Like many Western stars in the late 50s he had been seduced by TV. King of the Wild Stallions was actually shot before the TV show but not released until after. He’d started with bit parts back in the mid-1930s and had first led in an oater in 1941 but by ’59 he was near the end of the trail. There would be a spaghetti still to come, a couple of appearances in episodes of other Western shows and a late-60s AC Lyles geezer Western, Hostile Guns, but to all intents and purposes, King of the Wild Stallions was the twilight of George’s ridin’ the range. 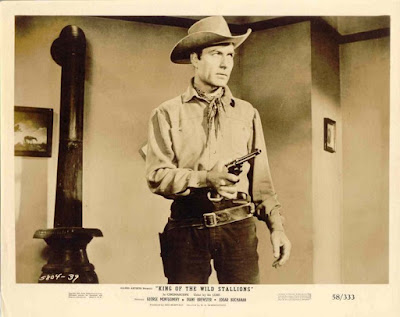 Like that geezer Western, Hostile Guns, King was directed by good old RG Springsteen. He had started working in Hollywood way back in the 1920s as a wardrobe assistant for Fox. In 1936 he moved to directing and worked as assistant director on many low budget Bs (often credited as Bud Springsteen). By 1945 Springsteen became a lead director and his first pictures in the chair were Bill Elliott, Allan Lane and Monte Hale oaters (he did seven in 1947 alone). He would work a lot for Republic and on TV shows (at one time or another he directed episodes of pretty well every Western TV show you care to name). But he too was nearing the end of the trail. He would do Showdown and Bullet for a Badman with Audie in the mid-sixties and a few of those late-60s AC Lyles pictures. He was perhaps no great artist (we’re not talking John Ford here) but he was reliable, experienced and professional. 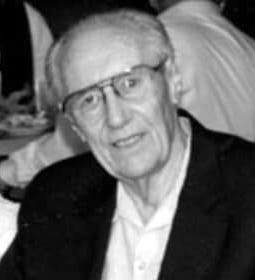 RG in his later years

It was written by Ford Beebe (below), who had ensured that Flash Gordon Conquered the Universe in 1940 and also produced and directed B-movies. He wrote for Montgomery when George was Davy Crockett, Indian Scout. He’d been writing Westerns since A Lass of the Lumberlands in 1916, but King of the Wild Stallions would be his farewell to the genre. 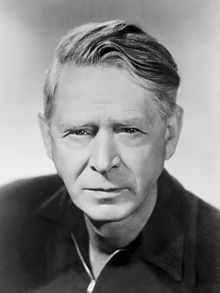 We open with two ranch hands, one a moron, out looking for strays. The moderately reasonable one, Doc Webber, is our old pal Denver Pyle. The moron is Woody Baines, played by Dan Sheridan. They spot Black Lightning, a well-known wild stallion, and it is Baines, the moron, who immediately takes out his rifle. Fortunately, there is also a small boy present, Bucky (Jerry Hartleben) who thwacks Baines’s mount across the rump, causing the moron to miss. 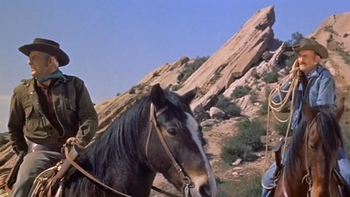 Denver and Dan are after the stallion

This small boy is the son of local widowed rancher Martha Morse (Diane Brewster, a regular on TV Western shows, later to be the murdered wife of Dr. Richard Kimble, but who had co-starred with Montgomery on Black Patch two years before this picture). 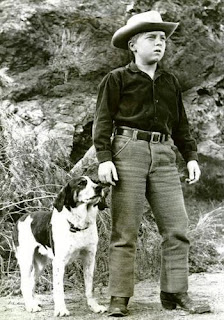 Working for her are Randy Burke (Montgomery) and crusty old Idaho (oh joy, it’s Edgar Buchanan). Randy loves Martha, though has to be pushed by Idaho into proposing to her. It’s one of those classic set-ups in which glam widow with young son hitch up with handsome Westerner and the trio will become a new family unit, probably going off to California to make a new start, like John Wayne in Hondo, Clint Walker in Yuma, Henry Fonda in The Tin Star and so on pretty well ad infinitum. 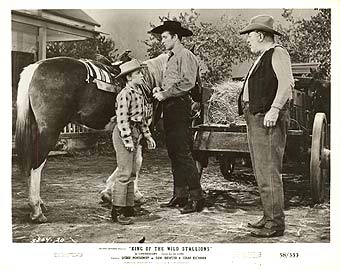 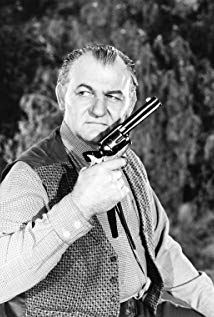 Now Martha desperately needs a $500 loan to secure more grazing or Ruthless Emile will undoubtedly get her ranch. Emile has bribed the local banker (Byron Foulger) not to grant the loan, the rat. But wouldn’t you just know it, $500 is the exact bounty Emile has placed on the capture of Black Lightning. You see he wants that horse too. They all seem to want it. Anything but let the beast roam free. That would never do. So of course Randy and Idaho, with young Bucky enthusiastic too, decide to capture the nag and beat out Emile with his own money. Bucky is ably assisted by his dog Buzz, or it may have been Boss – the boy’s diction wasn’t what it might be.

You can tell, can’t you, that this is a ‘family Western’, a genre which I must say strikes a chill into my heart but there we are, a Western’s a Western, and you gotta watch it.

There’s a sympathetic sheriff who looks (only very vaguely) a bit like Randolph Scott but it isn’t, it’s Rory Mallinson. But he won’t go up against Ruthless Rancher Emile. No, Randy and Idaho must shift for themselves. 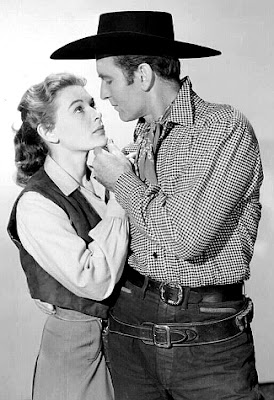 However, neither Randy nor Idaho are a match for the young lad, who with great resourcefulness manages to corner the stallion. Looks like the five hundred bucks are in the bag.

Yet no! There’s a horrid horse fall as a henchman (it’s the moron again) stretches a rope across the trail and brings Randy’s mount crashing to the ground. He also shoots Idaho. And takes the 500. He really is not nice at all. But it’s all Emile’s doing, the skunk.

Well, you may guess if the baddies are defeated, if the stallion is tamed and if Randy and Martha will find wedded bliss. It won’t be hard to guess, though naturally I can’t reveal any spoilers here.

Not George’s best Western, far from it, but no worse than many late-50s offerings, and it’s in Color DeLuxe and CinemaScope, shot by the excellent Carl E Guthrie up at Vasquez Rocks, so that’s pretty good. 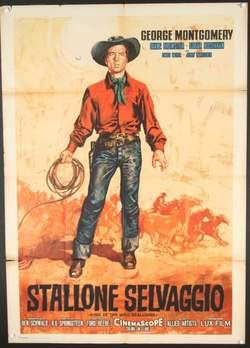