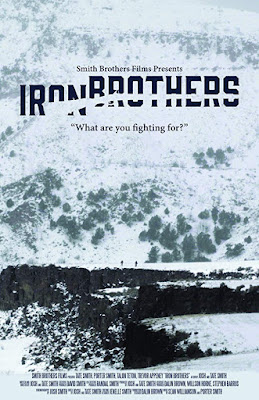 Back in July last year a new Western was released, a Smith Brothers Films production directed by the Smith brothers, written by the Smith brothers and starring two Smith brothers. A Smith brother was cinematographer, another wrote the music and another still was the editor. I guessed therefore that the Smith family had something to do with the picture and I was curious to know more. In fact I was invited to do a distance-interview but sadly, though I had a list of brilliant and pertinent questions (hem hem), the Smiths never got back to me with illuminating answers, so I can’t pass on fascinating insights about the making of the film to you, dear e-reader. Still, I did watch it (they kindly gave me access) and I thought it might be worth posting a comment or two on it. You might come across it and wonder if it’s any good. And obviously your first instinct will be to look it up on Jeff Arnold's West.

It’s an early Western about trappers, with a sort of Jeremiah Johnson vibe. Shot in stunning Idaho and Wyoming locations in winter, it captures very well the harsh beauty and real danger of the 1850s frontier. There was a time when Westerns had to be filmed in Mexico or Alberta to avoid power lines and contrails but the Smiths manage very well in Idaho to convey the huge and forbidding emptiness of the mid-nineteenth century frontier.

Orphans Abel and Henry Iron are struggling to make a living in a world of ever-scarcer beaver and declining demand for pelts. Apart from their financial difficulties, they have to face a brutal winter in a rough cabin and dangerous Native American hostility. Henry, the younger brother, would like to try California and the goldfields, but Abel is more for sticking it out. 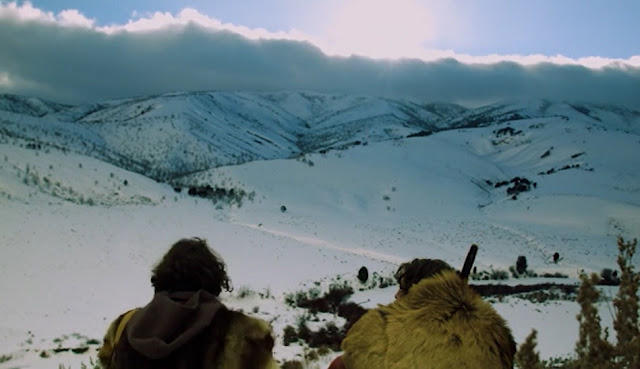 However, in the words of the (rather anachronistic) script, “things escalate”. (The first known use of escalate is 1944 and I doubt anyone used it much before Vietnam.) Pedantry aside, though, things do escalate. Abel shoots an Indian and runs from another, while Henry, thinking he is being cheated by a dealer, resorts to his gun and as a result loses the brothers’ only horse. “I’m sorry, Lily,” he rather pathetically tells the dying animal.

So now the brothers have three enemies: bad guys, Indians and the nature. These are of course the classic foes of Western heroes, and you do get the sense that the fraternal Smiths like and try to respect the genre. Various Western tropes are employed: it builds to a final showdown, the brothers want to go to California to start anew, Henry is kind to his horse in the first reel (though I don’t think movies have reels these days) to signify that he is a goody, and so on. You get the idea that the Smiths have seen a Western or two before. That’s good, though.

The two decide, reluctantly, to face the Western winter rather than wait in their cabin for the inevitable attack, so they take a minimum of equipment and leave. 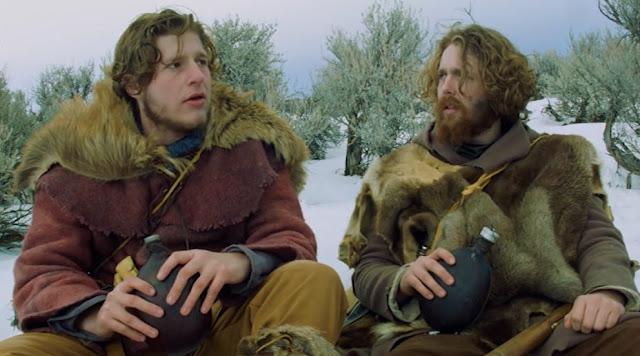 It is true that life on the wild frontier must have often been tedious and uneventful, and also that danger, when it came, would arrive unexpectedly. Thus, long stretches of quiet inaction onscreen punctuated by sudden flurries of violence do have a justification. This pattern also contributes to building atmosphere and our marveling at natural beauty. Still, the Smiths were making a commercial movie and as a viewer you do ask yourself if there is really enough plot for the 92 minutes’ runtime. The movie isn't fast-paced.

For most of the film the brothers are the only ones who speak – if you discount the war-cries of the Indians. So a lot of importance is placed on their lines and I’m not entirely sure the script can bear the weight. There’s a fair bit of pretty homespun philosophy in the brothers’ talk. If the fraternal relationship had developed in some way it might have been better but you get the impression that the brothers already know and understand each other utterly, and little changes in that regard. 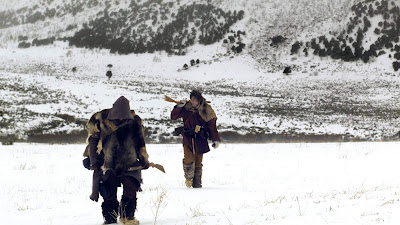 The appearance of old mountain man Jethro (Richard Dean, entertaining) is a welcome relief, though. He trades them coffee for victuals and company but is caught trying to steal the coffee back in the night, which leads to shootin’. Later Jethro will signal danger to us in another way.

There’s guitar music. The score is minimalist, but it works, complementing the desolate landscape.

They wear no hats, curiously.

The fighting is not stylized or balletic. There are undignified scuffles rather than choreographed stunt work. The word authentic springs inevitably to mind.

The finale is certainly packed with Western action, as we get a brothers/Indians showdown. Dramatically, I think the bad guys ought to have been brought back in but they are written out altogether after the initial fight with Henry. 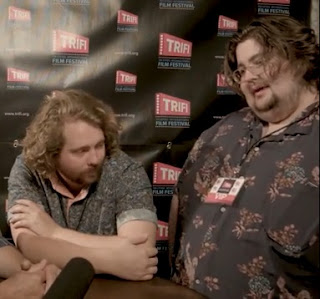 Two of the Smith brothers, Tate and Josh, co-directors and co-writers,
are interviewed (though not by Jeff)

All in all I thought this was a pretty good film. It would certainly repay a look if you get the chance. Though visually just about on a par with The Revenant and sharing some plot similarities, notably surviving the harsh terrain, it doesn’t have the quality of that picture, but still, it does have its points.

The acting of the two brothers, by the two brothers, is very good. It had to be - the film would have failed otherwise – but it is impressively done by Tate (Abel) and Porter (Henry), in their debuts, as far as I know. That, the convincing flurries of action and the almost National Geographic quality of the scenes make this a picture worth seeing. It’s original enough to stand on its own feet and I reckon the Smith family deserves considerable credit.

The picture won two awards, though not quite Oscars.