It has its points

The Halliday Brand, director Joseph H Lewis’s penultimate feature film (it came between 7th Cavalry and Terror in a Texas Town), was a self-consciously arty attempt at a psychowestern which, however, is overwrought and descends into melodrama.

Though only fourth-billed, Ward Bond was the real star, as the tyrannical patriarch Daniel Halliday, and he brought the movie some weight. Wagon Train had yet to start (it first aired in September ’57 while this movie was released in January) but Bond had made a big impact in The Searchers the previous year, and after a long career of Western roles, including with John Ford, was a much bigger presence in the genre than the top-billed Joseph Cotten, who was generally poor in Westerns. 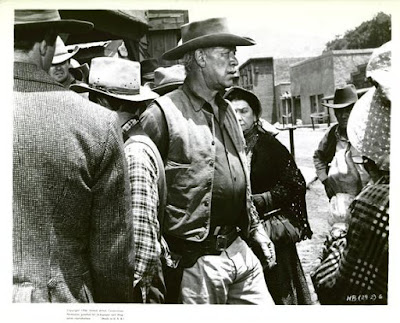 In this one Cotten overacts again and is extremely unconvincing as Bond’s son – he was born in 1905, only two years after Bond, and often, despite Bond’s make-up, looks even older than his father. This was Cotten’s third big-screen Western, after his poor performance in Duel in the Sun (1946) and his much better one in Two Flags West (1950), the latter being the only Western Cotten was good in. He overdid it in his short part in Robert Aldrich’s The Last Sunset, he was very weak as Major Reno in The Great Sioux Massacre and he would do some trashy spaghettis to end with. It was a less than glorious Western career, I’m afraid. He should have stuck to tracking down Harry Lime. 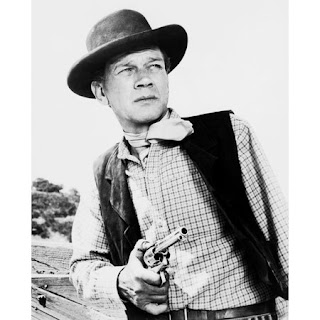 We also have Swede Viveca Lindfors, second-billed, doing her Garbo act, unconvincing as a half-breed Indian Aleta and New Jersey-born Betsy Blair third-billed and not terribly realistic as Bond’s daughter Martha (apparently she was cast with right-wing Bond to try to help her career through the choppy 50s waters of McCarthy-inspired witch hunts). She goes for the semi-sinister spinster-in-black approach while Lindfors attempts the passionate Latin beauty, not always successfully. 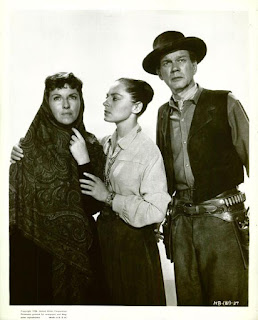 Luckily, Halliday’s other son, Clay, Daniel and Martha’s brother, is played by Bill Williams, who was usually pretty good. We also have Jay C Flippen, John Dierkes (as a clergyman) and Glenn Strange the Great as a leading townsman, so that helps mitigate the miscasting higher up the list.

The film was written by George W George and George F Slavin, which is a lot of Georges. The two had collaborated on the rather good The Nevadan, a Randolph Scott oater, in 1950, and would work together again on Red Mountain with Alan Ladd, City of Bad Men with Dale Robertson and Smoke Signal with Dana Andrews, so they knew what they were about, but they rather over-egged the pudding on The Halliday Brand, going for ultra-intense relationships and Freudian/Oedipal complexes we could probably have done without.

Director Lewis had a ‘visual’ talent greater than his narrative one. The director has his admirers and he managed to turn out low-budget pictures with a certain flair. Martin Scorsese has called one of his films (the noir Gun Crazy) “a tone poem of camera movement” but that seems arty talk to me, I’m afraid. There definitely is some noticeably good photography in The Halliday Brand – it was admirably shot in black & white by Ray Rennahan, who worked with Lewis several times - but that doesn’t make it a tone poem. Lewis and Rennahan went for some atmospheric noirish shots and Lewis’s trademark shooting action past foreground objects.

The producer was Collier Young, whose only Western feature this was. He was at the time Mr. Joan Fontaine. She didn't do Westerns either (unlike her sister Olivia de Havilland who did those oaters with Errol Flynn).

It’s a flashback Western. Clay (Williams), who has remained loyal to his father, finds the errant Daniel (Cotten) and persuades him to come home because Pa is dying. Daniel reluctantly agrees. Just before entering his pa’s bedroom, though, the screen goes all blurry, you know how they do, and he remembers how the estrangement happened, six months before. Just before the climax the screen will go all blurry again, in case we’re too dumb to know he’s back in the present.

The old man is one of those ranchers who back in the day defeated the Indians and carved an empire out of their land. Then he buried the hatchet (literally: there is a tomahawk sunk into a stump as a marker) and became sheriff. But he was always one of those sheriffs who did not suffer fools, or anyone else, really, gladly. He believes it is acceptable to hang or shoot the odd innocent man for the greater good of stability and order. He is, in fact, a fascist thug and local tyrant.

We learn how both brothers loved the same woman, the half-breed Aleta (Lindfors) - though they don’t seem to fall out over it – and how their sister Martha fell for Aleta’s brother, Jivaro (Christopher Dark). But Halliday Sr. allows Jivaro to be lynched by a mob for the murder of a local rancher. His eldest son assures him the man is innocent but he won’t listen, and you can tell he is just glad to be rid of a half-breed who might otherwise ‘pollute’ his daughter. Then the sheriff unnecessarily guns down Jivaro and Aleta’s father Chad (Flippen), compounding his wickedness. He is not a pleasant sort. 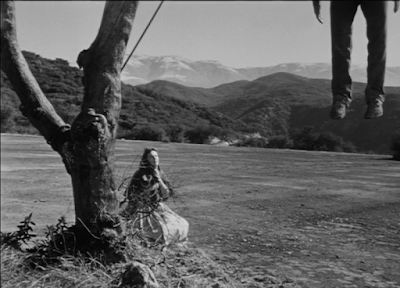 Daniel Jr. has left in a high dudgeon, disgusted at his father’s ways, and he vows to bring the old man down. This he does by stampeding cattle, burning barns and robbing the bank, so that the townspeople demand the sheriff hand in his badge. Plausibility is not really this movie’s strong suit. 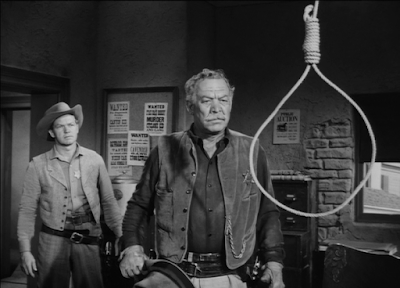 The sheriff refuses to resign but in the end his son tears the star off his vest after a brutal fistfight. 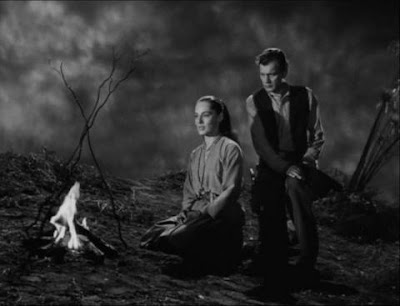 The irony is, as Aleta tells the son, in bringing the old man down he has become the father he despises.

The ending is rather pat.

The Halliday Brand is a worthy attempt at an intelligent Western and it’s good in parts, but it’s fatally miscast and all rather overdone. 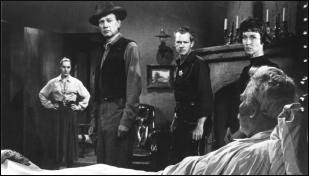