Joel McCrea was a major figure in the Western movie. He had the honor of playing some of the greatest characters in the whole myth: he was Wyatt Earp in Wichita, Bat Masterson in The Gunfight at Dodge City, he was The Virginian in 1946 and he was Buffalo Bill in 1944. And he was Sam Houston in The First Texan. Of these, The Virginian was fiction, of course, and his Earp and his Masterson were as close to fiction as you could get with people who had actually existed. The nearest to ‘biopics’ therefore were Buffalo Bill and The First Texan. But as with all Hollywood biopics, of the period anyway, it was mostly hooey. In the case of the Sam Houston picture, it only anyway deals with the period between Houston’s arrival in Texas in 1832 to the Battle of San Jacinto in 1836, and while this was perhaps the most famous part of Houston’s career, it was only a four-year period in a packed and eventful life.

Sam Houston and Joel as Sam

Even in those four years, the film’s 82 minutes manage to pack in a good number of historical inaccuracies and inventions, but that was also a feature of Hollywood films, and we shouldn’t be too critical on that account. Western movies are not supposed to be documentaries but entertainment, and if they take a few liberties with history, so be it. We judge it as a film, not as history.

It was a big effort for Allied Artists, in Technicolor and CinemaScope. The studio was trying to make major color A-pictures rather than the programmer Bs of yore. Don’t expect a huge-budget Alamo-type picture though. There are no massive armies, just a few rather Zorro-esque soldiers. Byron Haskin directed. Haskin was an ex-cameraman and assistant director for Selznick. He made the sci-fi classic The War of the Worlds for Paramount in 1953 and helmed three Westerns with Edmond O’Brien in the early 50s, including one of my all-time favorite Bs, Denver and Rio Grande. The First Texan was his only other big-screen Western. He would direct The Californians on TV afterwards. 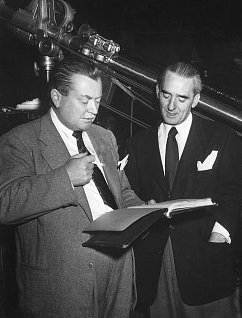 Haskin (left) looks over a script

Walter Mirisch produced. Walter (below) and his brothers Marvin and Harold were together one of the most successful producing teams in Hollywood history. They would later produce such 60s hits as Some Like it Hot, West Side Story, The Great Escape and The Pink Panther but as far as proper films go (i.e. Westerns) the Mirisch name deserves endless credit for The Magnificent Seven. Walter started as a producer for Monogram back in 1949 on very low-budget stuff. Once Monogram merged into Allied Artists (Mirisch was one of the prime movers of that deal) he would move upmarket, producing Wichita with McCrea in 1955, the first of six oaters he did with Joel (The Gunfight at Dodge City in 1959 would be the last) and he would also work with Gary Cooper. So he’s a major figure in our beloved genre.

Daniel B Ullman was the writer. Ullman was, we could say, a Western specialist, though I’m not quite so sure that he was a specialist in 1830s Texas history. He also once tried his hand at directing (that picture I mentioned the other day, Badlands of Montana) but he was mainly a writer of Western TV shows. He’d started on feature Westerns, though, in the late 40s (Return of the Bad Men, The Arizona Ranger) and did a lot of other Tim Holt and Whip Wilson oaters. He wrote Rod Cameron pictures too, such as Fort Osage and Wagons West, and he did the story and screenplay of Wichita, his best Western.

The First Texan was nicely shot by Wilfrid M Cline (many Westerns with all the greats, including The Tall Stranger with McCrea) in admittedly rather unTexan locations. There’s quite good big, swirling music by Roy Webb (The Kentuckian, Blood on the Moon, Track of the Cat, etc.)

The cast is large and contains some old-favorite names, such as Wallace Ford, James Griffith (as Davy Crockett), Chubby Johnson, Myron Healey, Charles Horvath, Nestor Paiva (as a priest), and Carl Benton Reid - as President Andrew Jackson. Joel’s son Jody is there too. 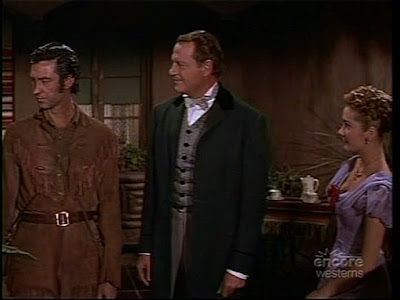 Joel McCrea is good – he was never anything less – though he is too sober, polite and mild-mannered to be convincing as Houston. It opens with him riding alone into Texas. We are told he is fleeing a marriage that has failed after two days (in fact it was three months). There is no mention of his drinking or of his assaulting Congressman William Stanbery with a hickory cane or the subsequent trials, or his fleeing to Mexico without paying the $500 fine imposed. He seems just to want to start anew. Actually, President Jackson, who wanted the American colonists in Texas to rebel and join the United States, seems to have asked Houston to go and investigate the possibilities. 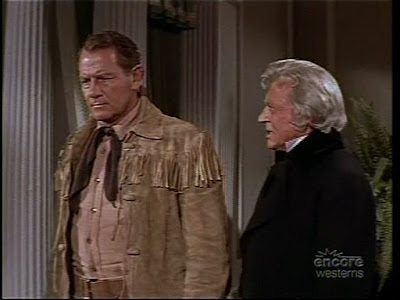 President Jackson tells him a free Texas is his destiny

Sam sets up as “the first American lawyer in Texas” (although William Travis already had a thriving practice). He says he is done with politics and he is “not interested in any crusades”. This was either highly disingenuous or a filmic fabrication. Houston actually threw himself into Texas affairs on the Jacksonian ticket right from the start. In the movie it is Crockett who delivers the pro-Jackson message, although in reality by this time Crockett was a fierce opponent of Jackson and had joined the Whigs.

The film gives us a secret conspiracy to secede from Mexico led by Jim Bowie (Jeff Morrow), William Travis (William Hopper), James Fannin (good old Lane Chandler) and Stephen Austin (Dayton Lummis). More dramatic than the boring historical facts, I guess. Houston is gradually, even reluctantly, drawn into this. He defends the conspirators when they are prosecuted and niftily gets them off. 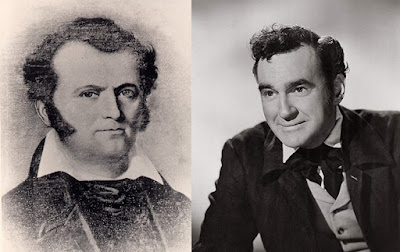 Actually not a bad likeness

Obviously there had to be love interest. The good news: the object of Sam’s affections is Felicia Farr, as Wallace Ford’s niece. Now I’m a big fan of Ms. Farr, and especially like her in those Delmer Daves/Glenn Ford Westerns Jubal and 3:10 to Yuma, in which she plays a character of considerable subtlety and charm. She was also excellent in another Daves Western, The Last Wagon, with Richard Widmark, released in September 1956, three months after The First Texan, and Reprisal! with Guy Madison in October that year (’56 was a busy Western year for her). Catch her, too, in Hell Bent for Leather (1960) with Audie Murphy. A first class actress and very beautiful (if you’re still allowed to say that these days). 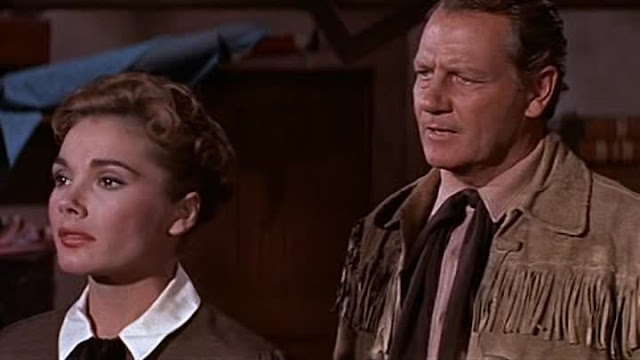 The movie version provides an apologia for Houston’s delay in engaging with Santa Anna, as in fact most Alamo movies do. It’s all a cunning plan by Houston to lure the Mexicans into a catastrophic defeat. We don’t see the Alamo or Goliad – in fact they are almost glossed over. But at least Santa Anna makes an appearance (David Silva).

Of course there's no mention of the secessionists being pro-slavery, and indeed no black people appear at all. This is a sanitized 1950s Hollywood story. The whole question is airbrushed out.

It all climaxes with San Jacinto. Santa Anna is captured (“I want him alive”, Sam has said) and the general announces to Houston, “You have conquered the Napoleon of the West.” Texas is an independent republic. Hoorah! Who’s gonna be president? “Sam Houston!” they all holler. 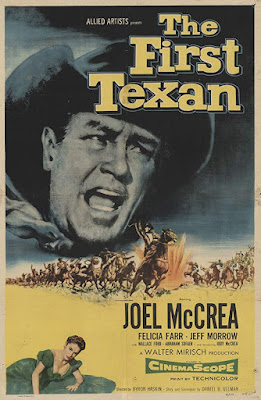 Oh well, it’s all stirring stuff. Republic's Alamo picture The Last Command had come out the year before and maybe they wanted a more upbeat Texas story. It’s entertaining in its way, though McCrea’s Houston is rather too respectable. All through it I just thought of him as Joel McCrea, rather than Sam Houston, and as such he is very good to see. Just don’t watch this picture to get the facts. But then why would you? 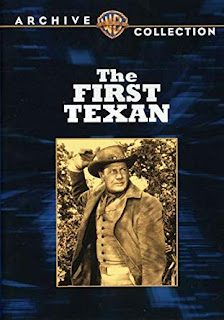