Not Audie's best but quite enjoyable

Audie Murphy made three Westerns in 1960, two mid-budget pictures for Universal, Hell Bent for Leather and Seven Ways From Sundown, and the classy A-picture (which, however, was panned and did not do well at the box-office), John Huston’s The Unforgiven.

The Universal movies he had been making since 1950 (Sierra and Kansas Raiders were the first) were well done, with quite high production values, good locations well photographed in nice color by talented DPs, and they featured some excellent Western character actors. The directors were usually solid, reliable hands. Murphy himself lamented that all they ever changed was the color of his horse. That was a bit unfair: some of the pictures were interesting, even unusual, and well done, such as, say, No Name on the Bullet (1959). But the films were not ‘great’ Westerns in the tradition of those fine 50s pictures made by the likes of John Ford, Anthony Mann or Budd Boetticher. They were dependably entertaining but lightish fare. Hell Bent for Leather was typical, perhaps at the upper end of the quality scale. 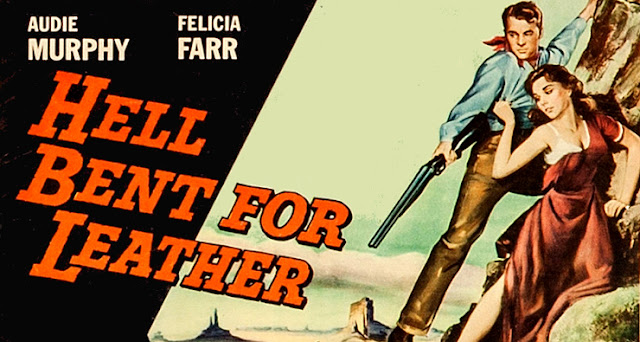 Personally, I say I am hell bent if I am utterly determined, or I might go hell for leather if I am recklessly fast, but I’m never hell bent for leather. But never mind.

This one was a George Sherman picture. Now we have often enthused over George (left) as a director of Westerns, and justifiably so. Sherman (1908 – 1991) did a lot of those Three Mesquiteers pictures back in the 1930s and John Wayne generously remembered him on big later Batjac Westerns, though by then Sherman was really only director in name, Duke himself having to do most of the work on Big Jake. But pint-sized Sherman (he barely reached five foot) was involved in 158 Westerns altogether, from 1935 to 1971, nearly all Bs. He was a real pro, and knew exactly what was needed and how to do it.

It was produced by Gordon Kay, who was Allan Lane’s producer all through the late 1940s and early 50s. But he graduated to bigger fare, such as Quantez and Day of the Badman with Fred MacMurray, before specializing in Audie Westerns from Hell Bent onwards.

The writer was Christopher Knopf (right) from a novel, Outlaw Marshal (whose title does rather give the game away) by Ray Hogan (1908 – 98), a prolific writer of Westerns who was the son of a lawman and grew up in New Mexico. Mr. Knopf (who is still with us) was involved with Zane Grey Theatre on TV and did the teleplay of many other shows (especially Cimarron Strip) but he also wrote three big-screen Westerns, Hell Bent, The Tall Stranger and Posse.

It is a great movie visually, photographed by Clifford Stine (5 Audie Westerns and various others) in CinemaScope and Eastmancolor, with stupendously good Lone Pine locations (that give a Boetticher tinge to the picture).

The female lead is the gorgeous Felicia Farr (left). I think Ms. Farr was excellent in Westerns, and I especially like her in those Glenn Ford ones, Jubal and 3:10 to Yuma. She also led in The Last Wagon with Richard Widmark (she was a real favorite of Delmer Daves), Reprisal! with Guy Madison and The First Texan with Joel McCrea. In Hell Bent, her last big-screen Western, she plays an orphaned young woman employed as the town child minder who is virtually taken hostage by Audie’s character but who comes to believe him and then, perhaps, even love him.

The chief bad guy is the crooked and homicidal US marshal (actually, he isn’t one; it’s a con) played by Stephen McNally. James Stewart’s evil brother Dutch Henry Brown in Winchester ’73 in 1950, he was tried out by Universal as goody lead in three of their Westerns, Wyoming Mail, Apache Drums and The Stand at Apache River, but then he slipped back to supporting roles. I think he was better as the heavy.

We start with a man afoot in the desert who comes across our hero Clay (Audie). It’s Jan Merlin and he is a bad one: though Clay gives him water and offers him food, he bashes Clay on the head with his shotgun and steals his horse. Now it’s Clay who has to walk. But at least Merlin drops the fancy shotgun.

He gets the fancy shotgun. Sadly though it's never seen again after the first reel.

Clay gets to a town which seems to be deserted (his arrival reminds me a bit of Jock Mahoney’s in Joe Dakota) apart from the liveryman (John Qualen) and bar tender (Olan Soule) who take one look at the shotgun and look very uncomfortable. They think Clay is famed murderous gunman Travers (Merlin), whereas in reality he’s just a humble horse buyer on his way to a sale. They fetch some townsmen, who had been off at a funeral, and of course, it being a Western town, their first desire is to string Audie up.

Luckily the law arrives, in the shape of McNally wearing a badge and claiming to be US Marshal Dackett, and takes our hero prisoner, to stand trial in Denver, he says, and rides off with him. He tells the townsmen, looking at Audie, that he recognizes Travers. The liar. 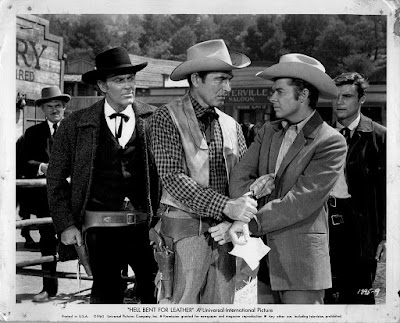 He claps the bracelets on Audie

Once clear of the town, Audie asks to be released, as they both know he isn’t Travers. No dice. In fact it seems the marshal wants to kill him, a corpse serving his purpose (the bounty) just as well. Audie makes a run for it and in a ranch house finds the fair Janet (Farr) whom he abducts. They are spotted escaping and there’s a chase, for the ‘marshal’ has raised a posse of the townsmen. Of these men, only Mr. Perrick (Herbert Rudley) is reasonable, for he raised the orphan Janet and cannot believe she is in cahoots with the man he assumes to be Travers. The others, especially the marshal, are bloodthirsty, seeking only to shoot down the supposed outlaw (they are Western townsmen so they have no interest in a trial) and, if she is in with him, the girl too. A townsman named Moon (James Westmoreland as Rad Fulton) is especially vicious. 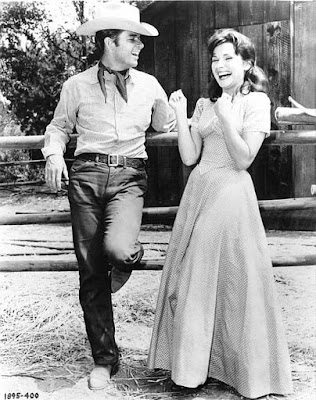 They laughed on the set but not in the film

Well, Clay and Janet elude the posse and come upon a ruined cabin where they take shelter from the rain. Janet says she used to live there when her parents were alive. She seems a sad girl. They are just drying off and beginning to get to know each other (chastely, natch) when who should burst in but larger-than-life badman Ambrose (Robert Middleton) and his two ne’er-do-well brothers, Shad (Joseph Ruskin) and Grover (Steve Gravers). I love Robert Middleton in Westerns. He was always good value. In this he reminds me a bit of Uncle Shiloh Clegg (Charles Kemper) in Wagonmaster or Preacher Quint (Donald Pleasence) in Will Penny. Both were charismatic badmen with reprobate family members who hold the good guys hostage. Actually, though, in this one I don’t think the bad guys were dangerous enough. 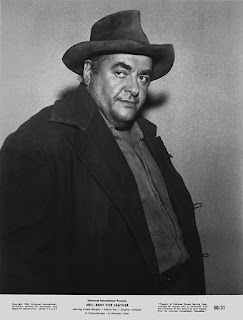 Bob Middleton, one of my favorite Western character actors

Finally Clay and Janet make a run for it but now the marshal has hired an Indian tracker, William (Eddie Little Sky), whom the lawman disparagingly only calls ‘Red boy’. So the posse is hard on the heels of our hero (and now, heroine).

They get to the town of Paradise, where the people are just as unfriendly as they were in the earlier town, and there they find Clay’s horse, the one stolen by the outlaw Travers in the first reel, and sure enough, Travers is there too. So there’s a three-way conflict looming, or even four-way if those renegade brothers get on the trail.

Paradise. But it isn't.

It comes to a climax (i.e. showdown) in rocks very reminiscent of where McNally and Stewart shot it out in Winchester ’73 (thought these ones are in color). You may guess who wins out, and who gets the girl. Interestingly, through most of the picture Audie has no gun. So he’s quite resourceful.

Showdown in the rocks

Well, well, it’s no great shakes, and some of the plot is on the improbable side. And it would have been vastly better with Dan Duryea, say, or Lee Marvin as the vile marshal. And, much as I like Audie, I would have liked to have seen Randolph Scott in the lead. But still, it’s an enjoyable oater in bright color.

Bob Steele was supposed to be in it, but I didn’t spot him. 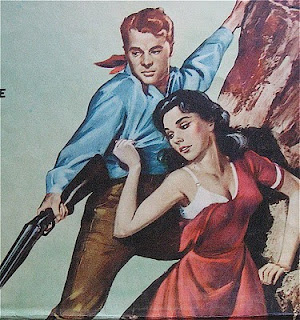 Nice artwork (rather osé though)