Gunsight Ridge is a minor Western noir. I don’t know if it was shown as a second feature but it certainly has the air of a B-Western. Having said that, it does have its points.

Joel McCrea, for one. He was never less than excellent in Westerns. Here he is an enigmatic Westerner, ready to switch on the Irish charm when the colleens are around, but tough as all get-out underneath. An ideal part for Joel. It was his 26th big-screen Western (depending on your definition) and one of four he did in ’57 (the others being The Oklahoman, Trooper Hook and The Tall Stranger), so he was certainly a fan of the genre. 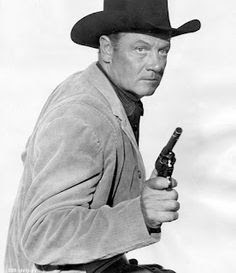 Joel does his thing

It was directed by Francis D Lyon (1905 – 96), not the greatest of artists really. He was a former editor (he had worked on parts of Red River) who helmed fairly routine pictures from the mid-50s on.  He did mostly TV work but he did direct two McCrea oaters, this one and The Oklahoman, as well as Escort West with Victor Mature. 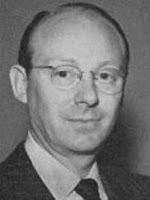 The producer of Gunsight Ridge was Robert Bassler, another former editor who went on to produce some big pictures for Fox (including the fun A Ticket to Tomahawk and the more B-ish Dale Robertson oater The Silver Whip) but who flopped mightily on the dire Gentlemen Marry Brunettes and was relegated to TV. 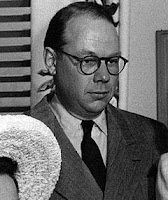 It was shot in a nice black & white (and the modern print is good) with locations in and around Old Tucson (like Trooper Hook) by Ernest Laszlo, no less, so is quite classy from the visual point of view.

There’s some nice dialogue, by Talbot and Elizabeth Jennings. This was Elizabeth’s only contribution to the fifth art but Talbot, who was twice nominated for an Oscar (though not, sadly, for a Western), did the screenplay of a few oaters, and one of his stories became The Sons of Katie Elder. I liked this exchange:

- Stage passenger: Seems like I ought to place you, but I can't.
- Mike Ryan (McCrea): Can I be of any help?
- Where you from?
- Well, almost any place you can get and some you can't.
- In what capacity?
- Well, that depends on where I go.
- No doubt you've got something quite special off in Bancroft.
- That depends on Bancroft.

- I can ask more questions and find out less from you then any man I ever knew.
- Kind of a natural gift.

And this one, between four ne’er-do-well cowpokes:

- Where are we gonna get some grub at?
- We'll pick up supplies in Clarksville.
- Where's that?
- Right where they built it. Where did you think it would be? 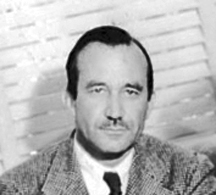 The bad guy is second-billed Mark Stevens. I’m not the greatest Stevens fan, though I think he was very good as Jack Slade. He was the former nightclub singer and stage actor Richard Stevens who got a contract with Fox. Darryl Zanuck changed his name, darkened his red hair and had the freckles covered up, and he specialized in noirs, often in supporting roles. He was sometimes branded a lesser John Payne. As John Payne was regarded as a lesser Alan Ladd that wasn’t too much of a compliment. Westernwise, he was third billed in Roaring Guns in 1944, led in Sand in ’49 and then came his best-ever role in Allied Artists’ Jack Slade, with Dorothy Malone, in ’53. After that it was mostly TV work but he came back to lead in the B-Westerns Gunsmoke in Tucson and Gun Fever (both 1958). He ended his Western career with a spaghetti, Jessy Does Not Forgive…He Kills! (which, mercifully, I have not seen) in 1965. Then he ran a restaurant and wrote books, before filing for bankruptcy. His career in the saddle was less than glittering but he did have something about him, especially as darkish bad guy. In Gunsight Ridge he plays slick but sad gambler Velvet with a past including a failed career as concert pianist. 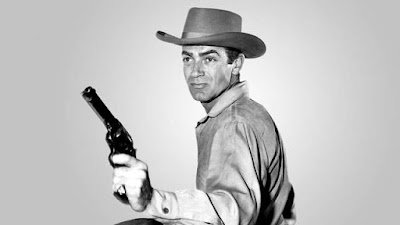 As was often the case, there are two dames, a ‘good’ one and a racier saloon gal. The good one is named Molly (I am surprised she wasn’t a schoolteacher; she is in fact the sheriff’s daughter) and Joel is attracted to her, naturally, while Rosa is the saucy moll who goes for bad guy Velvet. Joan Weldon takes the part of Molly. You probably remember Joan as Guy Madison’s love interest in The Command or Randolph Scott’s in Riding Shotgun or Fred MacMurray’s in Day of the Badman. Darlene Fields plays Rosa, denizen of the Cobweb Saloon. This and a small part in The Rawhide Years were her only big-screen Westerns. 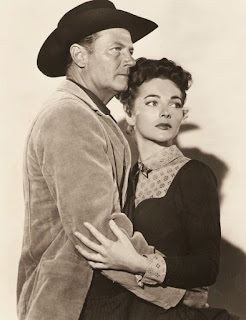 Good old Addison Richards is the decent though aging Sheriff Tom Jones, Molly’s dad. Solid, dependable character actor in Westerns from the early 1930s on, he never led in one. This was in fact possibly his biggest part in an oater. He was often a respectable townsman in a bit part. 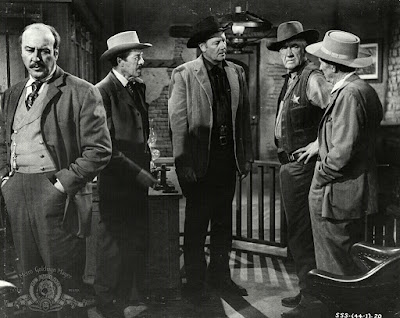 ...is the decent sheriff the townsmen want to depose

Lower down the cast list we have Dan Blocker as the bar tender, Slim Pickens as the stage driver (a drunken yahoo), LQ Jones as one of the reprobate (and equally alcoholic) cowpokes and Joel’s son Jody as Groom. 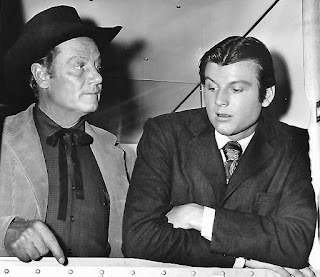 Joel and Jody
It opens nicely in Arizona scenery (saguaros, etc.) with a stage meeting a train. Mike Ryan (McCrea) and Molly disembark from the cars and board the coach. But on the way from the railroad halt to the town of Bancroft, the stage is held up, by a masked man we nevertheless immediately recognize as Mark Stevens, so I don’t know why the driver or passengers couldn’t tell it was Velvet. Ryan is very steady and competent during the robbery. Velvet’s accomplice, a certain Alex (uncredited actor) lets his kerchief slip and is recognized by driver Slim, so Velvet shoots Alex dead, rather callously. He can’t afford to be i/d’d, you see.

Joel has to take over the reins when Slim drinks himself insensible and once in Bancroft he also aids the sheriff disarm and arrest four Lazy Heart cowpokes who are hurrahing the town, showing himself to be handy with a Colt’s, so he’s already proving to be one of those able Westerners who can deal with bad guys. It isn’t long before Sheriff Jones takes him on as a deputy. 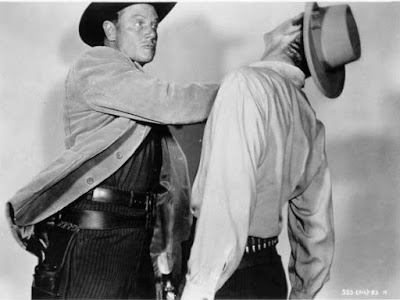 Velvet compounds his felony by robbing the bank and planning a train heist, and he has no compunction about gunning down inconvenient interlopers. He’s not a very good chap. But Sheriff Addison and Deputy Joel are on his trail. They have their suspicions, even though Rosa alibis Velvet.

Still, the lawmen can’t pin the criminal down, and the townsmen want to fire the sheriff. Luckily, at this point Ryan reveals himself to be a Wells, Fargo special agent, and he keeps the sheriff in office. They should have known that already. Hadn't they seen Joel's 1937 Paramount picture Wells Fargo? He pretty well invented Wells, Fargo. In Westerns Wells, Fargo men seemed as powerful as US marshals, at least judging by Jim Hardie. I suppose Joel could have been a Pinkerton (and in fact he was in The Lone Hand), but sometimes in Westerns the Pinkertons were a bit on the baddy side, whereas Wells, Fargo detectives were always goodies. 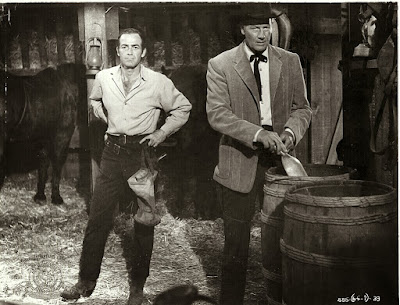 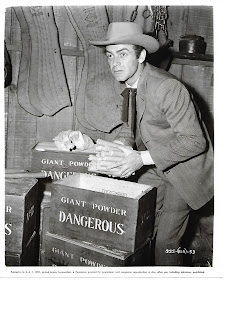 He hides the loot in a dynamite box. Was that wise?

Well, there’s quite a lot of of action in the last reel, with mucho shootin’ and, of course, tootin’. Velvet has hidden his ill-gotten loot in a dynamite box (he’s a mine owner) strapped to a mule and Sheriff Tom shoots at him, not knowing that, so there’s a big boom, unluckily for the poor beast of burden. There follows a blazing gunfight between mine owner and lawman, and then Deputy/Wells, Fargo man Joel takes up the chase. It’s all go. We finally get to a shoot-out in the rocks, Winchester ’73 style (well, countless Westerns style, really) and you may guess who gets shot and who wins and who gets the girl.

Honestly - and when am I anything less? (hem hem) - Gunsight Ridge is not a top-drawer Western. It’s a bit routine and it doesn’t stand out. Joel was ever so slightly anno domini to be playing an Irish lothario and some of the plot is on the improbable side. The days of the black & white B-Western were numbered, and indeed Joel himself would soon defect to the small screen and do the series Wichita Town. Nevertheless, it’s pretty and there’s plenty of action. Some of the dialogue is entertaining and the picture does stick in the memory a bit more than many minor oaters of the period.