From time to time on this blog we have mentioned the great Buck Jones (left). I am especially fond of the lyrical and charming John Ford-directed Just Pals, a Fox picture of 1920, in which Buck played the town bum, Bim.

In my review of that movie I gave a brief summary of Jones’s career:

Buck was one of the great silent cowboys. Brought up (according to some) on a ranch in Indian Territory, he learned roping and riding early and after Army service he joined the Miller Brothers’ 101 Ranch Wild West show and became their champ bronco buster. He settled in Hollywood and got work on many Westerns, especially with Tom Mix, then starred in his own. With his famous horse Silver, Buck was one of the most popular actors in the genre, and at one point, amazingly, he was receiving more fan mail than any actor in the world. He successfully made the transition to talkies [at Columbia] and starred in nearly 150 pictures. He died aged 50 in 1942 after receiving horrific burns in a fire in a night club.

I’ll be writing more on Buck’s Western career later on.

Today, though, we’ll have a look at one of his Universal pictures of the early 30s. We were talking the other day about how Ken Maynard separated from the studio in 1934 (Universal boss Carl Laemmle couldn’t stand his appalling behavior anymore and thought his last Western really bad; Maynard went off in a huff to Mascot). Laemmle replaced Maynard with Buck Jones – billed then as Charles ‘Buck’ Jones - as his principal Western star. Buck led in four Westerns for the studio in 1934, and seven in ’35, of which The Crimson Trail was one. 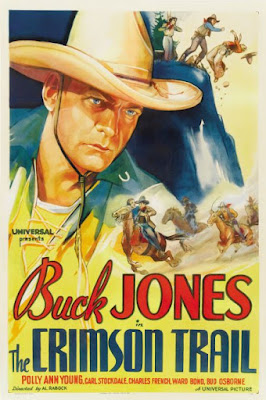 The first thing you notice is the poor quality of the print and the sound. Buck’s Columbia pictures are often in quite good nick but some of these Universal ones would benefit greatly from remastering. Still, they are ‘period’ artefacts and you live with it.

There’s rarely any music either, perhaps as a budget-saving measure. These pictures are hardly big productions. But actually silence can make a refreshing change every now and then.

One reason I like The Crimson Trail is because a young Ward Bond is the bad guy. I say young, but maybe youngish would be nearer the mark: he was born in 1903. He had made his Western debut with his great pal John Wayne in an uncredited bit-part in The Big Trail in 1930, and he then became a regular heavy in Buck Jones oaters (this was already his seventh). In The Crimson Trail he is a ranch foreman, Luke, who is secretly leading a gang of rustlers, the skunk. You can tell he’s bad because he drinks. Prohibition had ended in 1933 but it had left its mark. Heroes usually refused alcohol in post-‘33 Westerns while the bad guys swigged from a bottle. 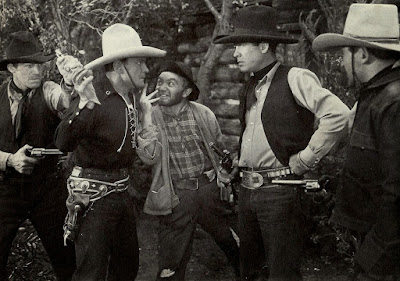 Luke shoots rancher Bellair (Carl Stockdale, who alibied one of the key suspects in the sensational Hollywood murder of director William Desmond Taylor in 1922, and was in 116 Westerns, from 1913 to 1942).

Buck and Silver come to the aid of the fallen Bellair and his glam daughter, Kitty (Polly Ann Young, Duke’s amour in The Man from Utah). But Buck is nephew to Bellair’s rival and enemy, Carter (Charles K French, a Western regular ever since The Mexican’s Crime in 1909), and despite the kindness Buck has shown, he is persona non grata at the Bellair ranch. 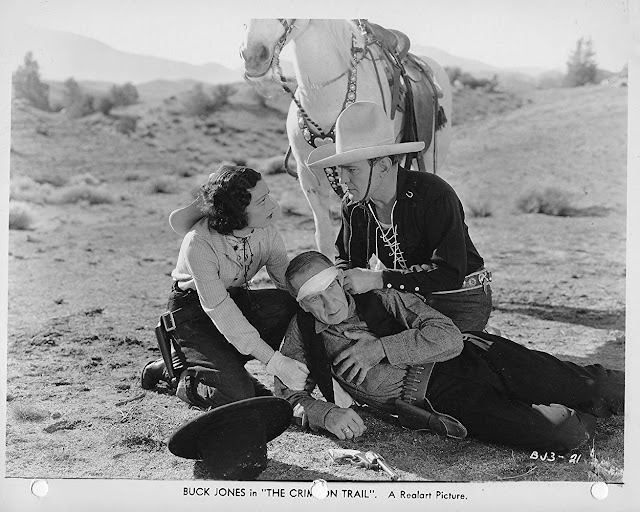 Buck goes to the aid of the wounded rancher - and the fair maiden, natch.
Silver looks protectively on.

Buck finds the outlaws’ cabin and overhears their wicked plans but is captured by the hooligans. Now we are introduced to someone even badder than Ward Bond, the evil and aptly-named Loco. He seems to have strayed over from another Universal lot, one where a horror movie was being made, for he has a crazed and manic laugh and delights in telling his victim about the pain he is shortly to undergo. He toys with a grisly axe. 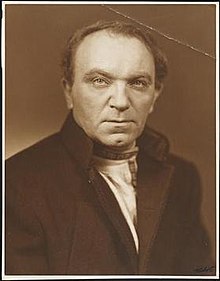 Loco is played with gusto by John Bleifer, born in Poland in the then Russian Empire, known for his work on the 1935 Les Miserables. It could just as easily have been Lon Chaney. Bleifer didn’t do Westerns as a rule. 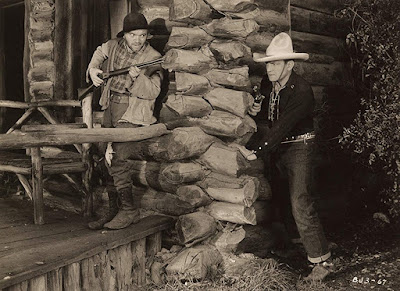 However, Loco is cheated of his prey for Buck escapes, you will be amazed to hear. Meanwhile, though, the Bellair ranch hands, led by Tom (Charles Brinley, a Western stalwart who appeared in 126 titles from 1916 to ’39) want revenge for the shooting of their boss, and with torches they ride at night to burn the Carter ranch.

Now Luke abducts the fair Kitty and takes her to the cabin-lair, where, in pure 30s-horror style the mad Loco has designs on her, in a sadly innocent way, and she recoils in horror. Luke ain’t pleased with that either because when he discovers Loco pawing the girl he shoots him. Luke then puts Kitty on his horse and, riding double, they head for the border, but of course they are no match for Silver. There’s a great fistfight between Buck and Ward. The girl sends the clever Silver to find the ranch hands. “Silver, go fetch them!” He duly gallops off, finds Tom and the boys, and when Tom asks the nag, “Something wrong?” Silver nods and neighs and leads them to the battling duo. There’s a “surprise” ending when we find that Loco isn’t dead after all, the bad guys are bested, the two ranchers make up and move in together (Carter’s ranch having been burned down), Buck gets the girl and we end with a kiss. A most satisfactory time was had by all. The End. 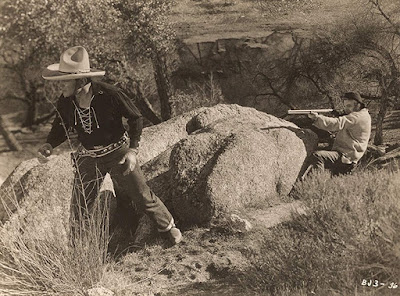 Grippng showdown shoot-out in the rocks

Buck wears make-up that appears to have been applied with a trowel. But the whole thing is gripping. My dog Wyatt was fascinated throughout and was especially interested in the galloping scenes, of which there are many. Buck particularly spends most of the picture galloping hither and yon. 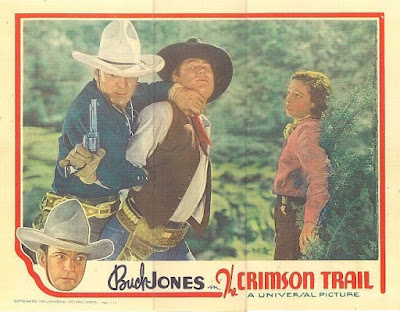