Vera Miles (left) topped the billing in Molly and Lawless John in 1972. Fair enough, she was the biggest Western star in the cast. The former Miss Kansas 1948 had been taken up by Hollywood, and notably by John Ford, who used her in The Searchers and The Man Who Shot Liberty Valance, and by Alfred Hitchcock, who cast her in The Wrong Man (she would also have done Vertigo but became pregnant). I must say that she was extraordinarily beautiful in that 1950s way. Hitchcock called her “the new Grace Kelly”. To me, in all honesty, she wasn’t that great an actress, at least judging by The Searchers. But she had Western form: The Charge at Feather River in 1953 and Wichita in 1955, as well as a good number of appearances on different Western TV shows.

In Molly she plays a naïve, unfortunate and put-upon woman who finally stands on her own two feet and gets the better of the men who abuse her.

She is the wife of the odious Marshal Marvin Parker (John Anderson, solid as ever) of the one-horse town of Cactus, NM, who treats her abominably. Lonely, unloved, childless, she falls for a young man in the town jail, about to face trial and certain execution for robbery and murder, in a bank robbery we see in the opening scenes - which, by the way, contains one of the worst horse falls I have ever seen. I didn’t see the oft-mentioned quote about no animals being hurt in the filming of this movie but if there was such a statement it was false.

This outlaw, John Lawler, is played by Sam Elliott, then 28 and in his first Western lead role. Before this he had only been Missouri Townsman (uncredited) in The Way West and Card Player #2 in Butch Cassidy and the Sundance Kid. Now he got to be male lead, with second billing after Ms. Miles. He looks very different, so that you hardly recognize him, but once he starts speaking it’s unmistakably Sam. Unfortunately, though, he plays a character so unpleasant that it is impossible to sympathize with him. And it’s one of the weaknesses of the film that every single character is loathsome, with the exception of Molly, who is, for the first half of the picture, silly and weak. 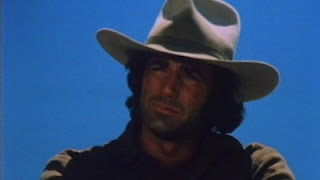 Mind, this was hardly megastardom for Sam. The picture was made by Malibu Productions (who?) and got its theatrical release from the Producers Distributing Corporation (not Cecil B DeMille’s silent movie company of that name). It pretty well sank without trace.

Another failing in this picture is the direction, by Gary Nelson, who produced a picture so slow that it is catatonic. The runtime of 98 minutes should have been cut by at least 20, if not more. The limited plot simply can’t take it. We have extremely lengthy scenes that can often only be described as tedious. Nelson had been one of the assistant directors on The Searchers and on Gunfight at the OK Corral but he doesn’t seem to have learned much from those experiences. He spent much of his career contributing to episodes of The Life and Legend of Wyatt Earp and Have Gun – Will Travel. There he might have learned economy and pace but nope. Sorry to be so critical but I speak as I find. To be fair, and in mitigation, I would say that he did a competent job on Santee with Glenn Ford the following year. 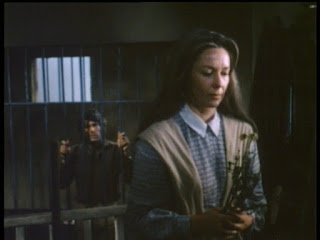 Vera is gullible and searching for affection

Nelson and his DP Charles F Wheeler (who had shot the James Garner Western Duel at Diablo) went for claustrophobic and dark interiors, perhaps in an attempt at realism or even art, but they overdo it. Some of the New Mexico locations are fine, though, especially the scenes at Puye Cliffs, Santa Clara Pueblo and in the White Sands National Monument.

The screenplay was by Terry Kingsley-Smith, this and three episodes of Daniel Boone being his only contribution to our noble genre.

There’s big swirly sub-Elmer Bernstein music by Gene Feldman and Johnny Mandel which seems somehow out of place, and it alternates with early-70s jazz which jars as being equally inappropriate. A dreary song by Renée Armand closes proceedings, and none too soon.

It just scraped up to a two-revolver rating for the Sam Elliott interest value. 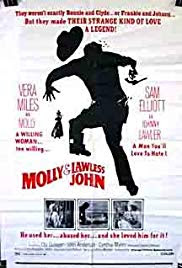