Hell’s Crossroads was a forgettable black & white Republic B-Western released on a double bill with the mighty Howard Koch-directed teen epic Untamed Youth in the spring of 1957. That’s probably all you need to know and I could end this review there. But I watched the movie so I might as well record for posterity (aka Jeff Arnold’s West readers) some deep and meaningful remarks on this majestic movie.

It was directed by ex-Mascot hand Franklin Adreon, known for such artistic triumphs as Canadian Mounties vs. Atomic Raiders and Panther Girl of the Kongo, pictures you doubtless revere.

It starred Stephen McNally, then in his late 40s and showing it a bit. McNally had been a Universal contract player and was, notably, James Stewart’s villainous brother Dutch Henry Brown in Winchester ’73 in 1950. The studio had tried him out as Western lead in three pictures, Wyoming Mail (1950), Apache Drums (1951) and the very similar The Stand at Apache River (1953), but it didn’t really take and it was back to smaller roles. By the mid-50s he was appearing for various studios and in fact Hell’s Crossroads was his last lead in a feature Western. 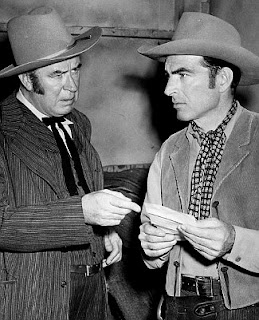 It’s a Jesse James story. In the mid-50s, when in doubt, you made a Western about Jesse James. This one has Henry Brandon as Jesse (already in his twenty-second Western, Scar from The Searchers the year before so he had come down a notch) and Douglas Kennedy as Frank. Kennedy had already appeared in 28 feature Westerns (including some quite good ones) and had been Steve Donovan, Western Marshal for a season 1955 – 56, so both actors were quite well known to Western aficionados. 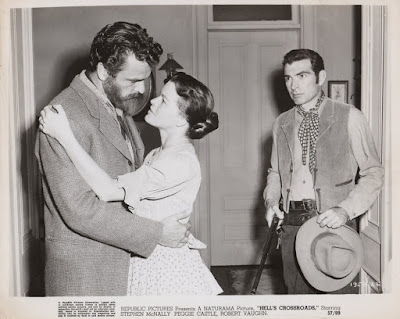 The movie is mildly interesting as having Robert Vaughn in his first big role, third-billed as Bob Ford. He duly shoots Jesse down (while he is dressing the Christmas tree, which falls with him and drapes his corpse with baubles). There’s no sign of brother Charlie. Vaughn had only done TV Westerns before this (he would be Billy the Kid in an episode of Tales of Wells Fargo the same year). His next big-screen Western would be as a punk kid in the Fred MacMurray oater Good Day for a Hanging in 1959. 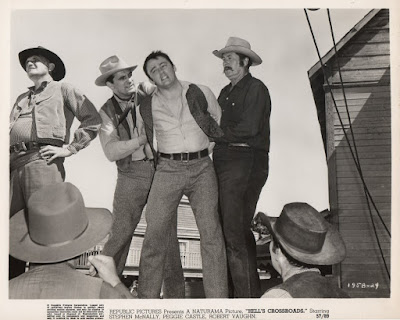 McNally is the fictional Vic Rodell, member of the James Gang. He was a boyhood friend of Jesse and also fought with Quantrill’s Raiders in the late unpleasantness. But he wants out. He’s considering turning himself in to Governor Crittenden (good old Frank Wilcox). You see he loves Peggie Castle, who is Bob Ford’s sister. Peggie had already had some dealings with Jesse, in Jesse James’ Women in 1954, and the year after would be memorable as gunslingeress in the Z-Western Two-Gun Lady (which I really must get round to reviewing as it is a masterpiece). This was her tenth big-screen oater. She would be Lily in Lawman from 1958 to ’62. 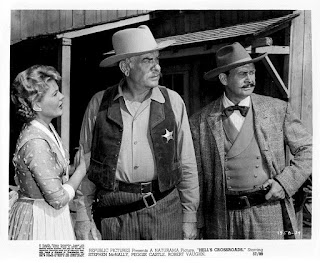 Now it isn’t easy to get a handle on the chronology in this one because Jesse & Co. haven’t raided Northfield, Minnesota yet, so we are pre-September 1876, yet Thomas Crittenden is in the Governor’s mansion in Jefferson City so we are somewhere between 1881 and 1885. Mmm. And then the gang does raid Northfield (we just see it in a newspaper front page, as low-budget flicks tended to do in the 50s) yet Cole Younger is still a member of the gang afterwards, but is shot dead after Jesse is killed in April 1882. You see, it’s all very confusing. Cole, by the way, is played by our old pal Myron Healey, one of the most often seen heavies of our noble genre, credited by IMDb with an astonishing 359 Western appearances from 1948 to 1975.

There’s a lawman on the trail of these bandits, Sheriff Oliver (another regular, Grant Withers, who had started Westerns in Buck Jones silent movies in the 20s and had even co-starred with Rin Tin Tin in a 1934 talkie). And he is aided by a Pinkerton man, O’Connell, who is none other than our old chum Barton MacLane, he who went right back to those Henry Hathaway-directed Randolph Scott oaters of the early 1930s like To the Last Man and The Thundering Herd.

Bob Ford gets arrested by these lawmen and thrown in jail (as he would in Good Day for a Hanging, so it was good practice) and the townsfolk naturally want to haul him out and lynch him, as one does, and the leader of the mob is yet another old friend, Morris Ankrum. Jack Perrin is a lynch-mob member too. 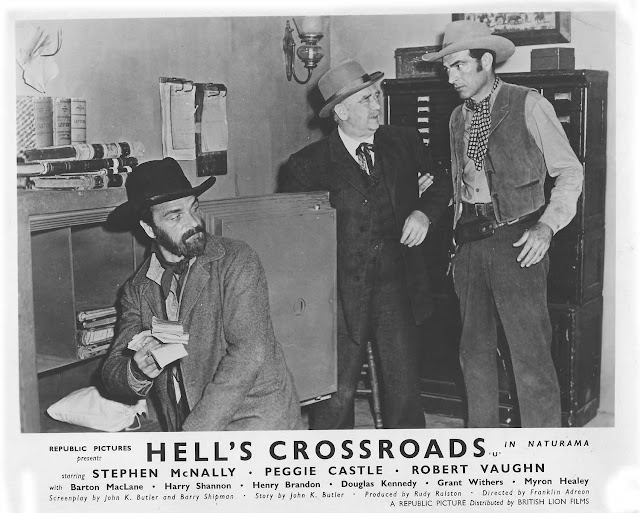 Jesse and Vic hold up the express office

You see, it’s quite a good cast, one of those ones in which every character has a well-known face.

Still and all, I’m afraid it’s only worth a watch if it’s a rainy day and there’s nothing else on. It got up to two revolvers for the familiar faces.