I have nothing against remakes as such. After all, it’s the third The Maltese Falcon we all know and love. As far as Westerns go, the third The Virginian (the 1929 one) of six was the best. Each generation has a right to have another go at a classic. Of course when some trendy director decides to put on a Shakespeare play in modern dress, s/he does still kind of feel obliged to stick to the original script. That doesn’t necessarily apply with the humble oater, where liberties may well be taken. Some remakes were hardly that: they were almost sequels.

And some weren’t too good, either. The 1966 Stagecoach was no worse than many Westerns of that year but wasn’t even close in quality to John Ford’s original 1939 film Stagecoach. The country-singer Stagecoach, in 1986, for CBS TV, was pretty bad – one of the passengers on the stage was Willie Nelson as Doc Holliday. Some remakes could be OK, though. The made-for-TV Winchester ’73 in 1967, a reprise of Universal's fine 1950 picture Winchester '73, was, honestly, weak by comparison to the Anthony Mann-directed original with James Stewart. But that doesn’t mean that it was junk.

An introductory voiceover tells us that the Winchester was the gun that won the West, and adds that the fact that the Indians had Winchesters and General Custer did not was the reason for the death of 220 brave soldiers at Little Bighorn. You knew that, didn’t you?

We open in the town of Onyx, near Tascosa, TX. A big shootin’ contest is being prepared, with the winner getting only the third-ever Winchester special centenary model (President Grant has the first and Buffalo Bill the second). So it must be 1873. So how come Custer’s already dead? Oh well, never mind.

There’s no Wyatt Earp to be master of ceremonies, only a rather nondescript townsman (Robert Bice). Favorites to win the marksmanship competition are the marshal, Lin McAdam (Tom Tryon) or his brother Dan (David Pritchard). They are crack shots and no one is likely to beat them. Except maybe their cousin, Dakin McAdam (John Saxon) who gets off the stage in town after serving six years in the state pen, and he’s not a happy bunny. 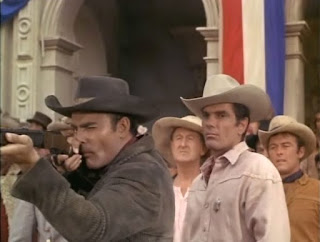 Now, you need to know the McAdam family tree here: brothers Paul Fix and Dan Duryea have sons. Duryea is ex-convict Dakin’s pa, while Fix is the dad of brothers Lin and Dan. Got it? Unlike the original 1950 movie, therefore, this one reveals from the get-go that the rival shooters are related. 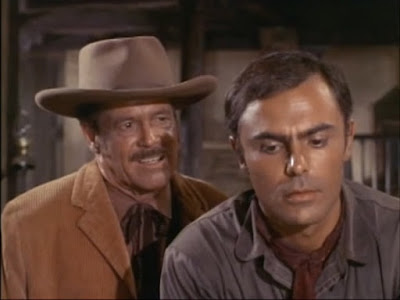 Of course Dan Duryea and Paul Fix are very well known old hands to us Westernistas, and it’s great to see them again. Paul does his usual solid act, while Dan manages not to overact for once. Dan was, you remember, Waco Johnny Dean, he of the hyena laugh, in the original. There’s no such gunslinger in this one. This was in fact Duryea's last Western. He made a noble contribution to our great genre.

John Saxon as the angry cousin is also no stranger to us Western fans - seven big-screen Westerns, the odd spaghetti, any number of TV shows. He was impressive from the very start, in John Huston's splendid The Unforgiven in 1960 (riding amazingly well for a Brooklyn boy). I thought he was also very good in The Appaloosa and Joe Kidd. 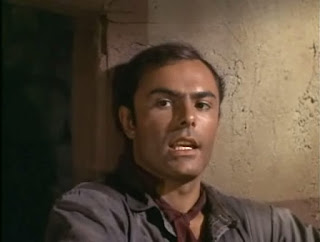 Saxon is the bad guy

The brothers weren’t quite such specialists of the saddle. David Pritchard had only done two or three Bonanza episodes. Ho-hum. Tom Tryon as the hero Lin (the Jimmy Stewart part) was Texas John Slaughter on TV, so was quite a household name, but... He’d been in Three Violent People before that show started and had starred in The Glory Guys in 1965 but those were his only Western features. He’s OK, I guess.

There’s a good bit only six minutes in when a saloon gal (Barbara Luna), who is the crooked dealer at blackjack, tries to cheat Dan (not Dan Duryea, Dan McAdam). Dan challenges her, so she whips a derringer out of a (rather daring) lady-holster and points it at him, asking him where he wants it. In the nick of time, though, brother Lin, the marshal, turns up, disarms her and runs her outa town. Well, that sent the picture up in my estimation.

As you may guess, Lin wins the Winchester fair ‘n’ square, with Cousin Dakin going grrrr in the background. He’s a bad egg. So bad, in fact, that rather than renounce owning that Winchester, he shoots and kills his Uncle Paul Fix to get it (Uncle Paul was engraving Lin’s name on it at the time). Dakin’s dad, Duryea, sees this but lies to protect his son, claiming that Uncle Fix pulled a gun first and it was self-defense. Preposterous. 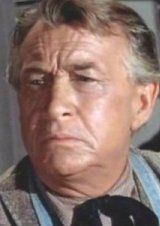 Uncle Paul Fix is gunned down

Well, Dan and Lin set out after their renegade cousin to bring him in for trial – and get that Winch back. They go to Tascosa, where John Doucette (who was also in the original movie) runs a saloon. He has a splendid armored gun-turret on the bar from behind which he pokes his shotgun. 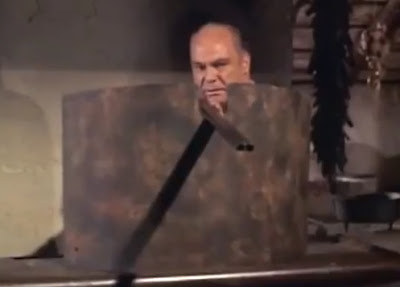 You don't want to argue with this saloon owner

And in the saloon, playing solitaire, is frock-coated gambler/arms dealer John Dehner. I always like Dehner; he was never less than excellent in Westerns. His character’s name is High Spade Johnny Dean, I suppose in homage to Waco Johnny Dean in ’50. Anyway, he wins the Winchester at poker. That he does so may have something to do with the fact the dealer is none other than saloon gal Luna, sleight-of-hand supremo and lover of High Spade, run out of Onyx by the marshal and now palming cards in Tascosa. 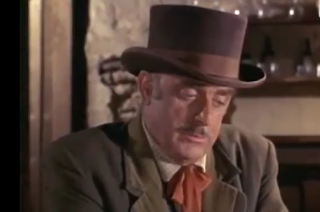 You know the ongoing story, I’m sure. An Indian (Rock Hudson in the original, Ned Romero as the Comanche Wild Bear in this one) kills High Spade and possesses himself of the rifle. He in turn is killed but a little Mexican girl finds the Winchester in the long grass afterwards and gives it to her pop, who promptly falls out with his brother over it. They decide that the gun is cursed (they may have a point) and go to church to get the local padre to bless it. Mmm, that’ll work.

That nice Universal Western town lot is Onyx (it was a Universal Television production) and pleasant Old Tucson and surrounding locations are used for for Tascosa and the in-between bits. It’s shot in Technicolor. Universal was always good at that side of things.

The director was Herschel Daugherty, who helmed all sorts of Western TV shows and the odd feature (such as the not-very-good The Raiders). He handles Winchester ’73 well enough, I reckon, you know, for a TV show. There are all those fades-to-black, of course, with preceding mini-climaxes in the plot, to accommodate the commercial exigencies of television.

The writers were Richard DeLong Adams and Stephen Kandel, using the 1950 Borden Chase/Robert L Richards screenplay based on a Stuart Lake story as the starting point, but considerably departing from that script (after all, it wasn’t Shakespeare) especially in the second half.

There are some good character actors in support. In addition to the aforementioned Fix, Doucette and Dehner, evil Cousin Saxon has a couple of henchmen, ex-lags from his jail days, and they are John Drew Barrymore as a vulture-like preacher and good old Jack Lambert as a vicious Scot (his Scots accent is almost as good as mine). If you don’t blink you’ll also spot George Keymas and James Griffith.

There’s a shoot-out in church (lower budget than Vasquez Rocks, I guess) when one by one the bad guys cash in their inevitable chips. Dan smooches the derringer girl but Lin doesn’t seem to get anyone. The rifle comes back full circle into the hands of its original owner, like O Henry's umbrella.

But for how long?

Until the next remake, I suppose.