It was to have been a Boetticher/Scott picture 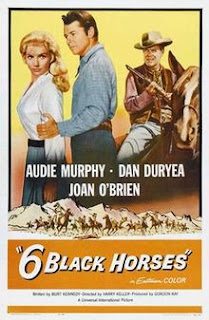 Six Black Horses was a late-ish Audie Murphy Western for Universal and not really one of his very best. At least on my DVD the picture quality is pretty ropey and the cast is small, more of an ensemble piece than a big Western, but it did have a couple of points in its favor, notably a screenplay by Burt Kennedy and Dan Duryea as second lead.

The following year Audie would do his last Universal Western and move to Columbia. For now, he continued riding for the studio that had launched him in the saddle back in 1950. He was not a happy bunny, though. He said that all they changed from picture to picture was the color of his horse. Not quite true, because there were some interesting screenplays. This one is quite original. For Audie it came between the feature Westerns Posse from Hell in 1961 and Gunfight at Comanche Creek in ’63. The previous year he had been Whispering Smith on TV but the show went through all sorts of problems and was discontinued in October ’61.

Six Black Horses is in Eastmancolor and was shot by Maury Gertsman (28 feature Westerns, 1944 - 67) in handsome Utah locations, so it’s no cheapskate affair. Universal were always good on this side, though this picture isn’t quite the glossy reasonable-budget affair that some of the other ones were. And maybe it’s the transfer but as I say the image isn’t the best on the DVD; in the opening shot you see a man walking in the desert, carrying a heavy saddle (a bit like the opening of Hondo). You assume it’ll be Audie but you can’t verify that until you get quite close up. 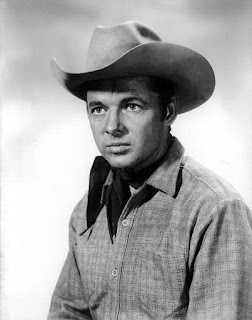 Audie is Ben Lane (same last name as Hondo, come to think about it), a cowpuncher with dreams of a ranch in Montana but for now, a bit of a loser. His horse broke a leg and he’s afoot. Suddenly he sees a bunch of wild horses and he skillfully manages to rope one and break it to the saddle. But no sooner has he done this than six riders appear, led by Roy Barcroft, and, obviously (for this is the West) decide to hang him. 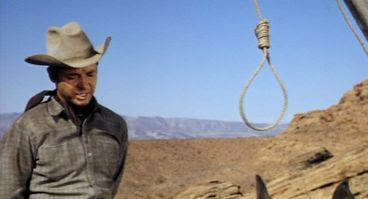 Now Dan Duryea arrives, with a Winchester. He can’t abide lynchin’ so he liberates Ben. The disgruntled and murderous mustangers don’t care for this one bit but there isn’t much they can do. Dan is called Jesse. Then he’s called Frank. Well, which James boy is he? Jesse or Frank? But nay, he is Frank Jesse, no relation. And Audie had dibs, really, anyway, playing Jesse James twice in Westerns. 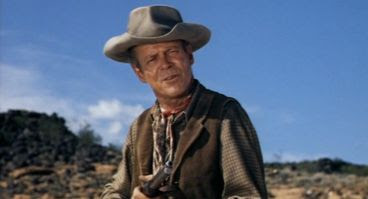 Dan and his Winchester persuade the lynchers to let Audie go

The new pals ride into Perdido. There they see a gaggle of men in a circle, shouting. Obviously some cruelty is happening and sure enough, they are betting on a dogfight. Because Western heroes are obliged to be nice to animals or children in the first reel (I think it was in their contract), Audie stops the fight, and thus earns my undying gratitude, because one thing I cannot abide is cruelty to animals, especially dogs. Audie was already pretty high in my esteem but now he is up there with Gary Cooper.

The mutt attaches himself to his benefactor and spends the rest of the movie riding on the pack of a mule, even when chased by angry Apaches, or on Audie’s saddle. Sadly, and rather disgracefully, this canine is not named in the credits, but he sure is a great dog.

After the dogfight a couple of hired killers make an attempt on the life of the pair but Jesse and Ben are too quick for them and the would-be assassins lie in the dust, defunct. Who were they? Were they after Jesse, or was it Ben? Why? And who paid them? Ah, ‘tis a mystery.

Well, not entirely a mystery because moments before we had seen one of the gunmen with saloon gal Kelly (Joan O’Brien). Did she commission the hit? If so, why? 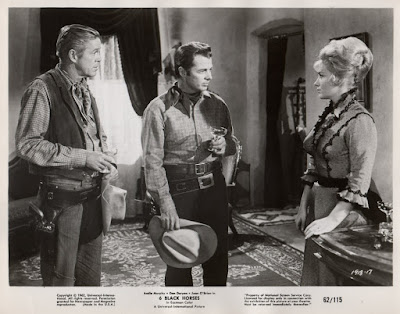 Kelly hires the pardners for a dangerous mission

Now Kelly (not sure if it’s her first name or last name) hires the two to take her to a remote town to meet her husband. But the trail lies through Apache territory. Danger lurks behind every rock. Yet she is determined. She offers them $500 apiece, then ups it to a thousand each. Wow. It would take them four years to earn that punching cattle. Now they can earn it in four days. But them durn Coyoteros! Ben hesitates. Then the mustangers turn up in town looking for Ben and Jesse. That decides it: they set out across Injun territory.

So now we get a woman and two men facing danger from hostile Apaches. They also meet up with a tough bunch of bounty-hunters and scalp-takers (shudder), ex-pards of Jesse, led by George Wallace, a stalwart of TV Western shows, and the trio have to drive them away with their guns. The renegades leave, far from gruntled, vowing that they will meet up again soon… 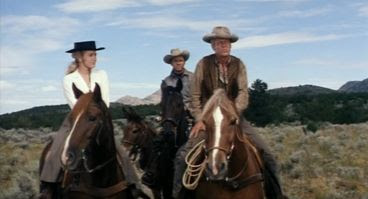 This is where it gets Boetticher

On the way we get hints that Kelly is deliberately trying to sabotage the trip. She builds the fire up to high-smoke levels, she makes sure Ben’s horse slips a shoe, and she offers no warning when she sees some Indians in the distance. Mmm, what’s her game?

Obviously they find a lake and she has a nudie swim. It was a 60s Western, after all, and the deserts were, as you know, plumb full of such ponds, enabling heroines to disrobe and bathe.

At one point the Apaches try to do a deal: they want to trade the woman for a fine horse. Audie pretends to consider the bargain, and he seems to talk their lingo fluently, but hey, it’s Audie, so we know there’ll be no deal. The Indians ride off, also less than gruntled, but, Audie warns (for he is a man who knows Indians) that they’ll be back… 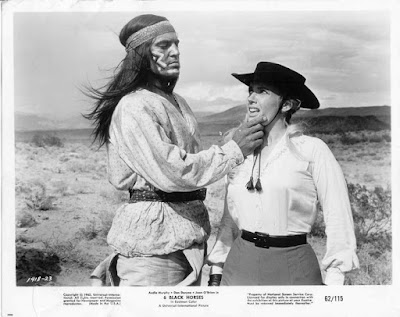 So they make a run for an old abandoned mission, with the dog bouncing perilously atop the galloping pack mule. They reckon they can defend this place, and they make it, but only just and only thanks to Audie’s courage and skill. Of the ten Indians, Ben gets three and Jesse gets four.

At the height of the battle, though, Kelly aims her Winchester at Jesse. Such perfidy! Audie sees, and shouts a warning and just at that moment a Coyotero war lance pierces the lady, hurting her badly and scuppering her planned assassination of Jesse.

So now we know. It’s Jesse she’s after. She paid those two gunmen to get him back in Perdido. Jesse killed her husband, you see. She used to be a whore and her beloved had saved her from all that, so she is pretty miffed that Jesse shot him. She tells Ben this, and Jesse overhears, so the cat is now well and truly out of the bag. 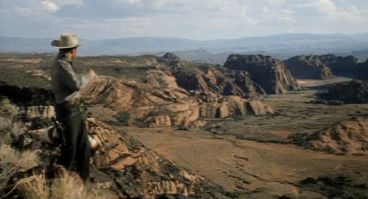 Now the dynamic has shifted. It’s no longer the two pals Ben and Jesse (Jesse having saved Ben from hanging, so he owes him) versus their rather aloof lady employer but la belle Kelly with decent Ben on the one side (they will inevitably wind up on that Montana ranch together) and unscrupulous gun-for-hire Jesse on the other. Jesse tells Ben that he wants six black horses (the equines of the title) to pull the hearse at his funeral, and we sense that this ceremony will come sooner than Jesse may wish.

We still quite like Jesse, though. He may be a hired killer but he’s a sympathetic type, and he’s Dan Duryea after all. Maybe his character’s name suggests the good/bad heroes of countless Westerns, those James boys. There’s quite a subtle bit of dialogue in which Jesse tells Kelly that their former professions were more similar than she may want to admit: he took money to kill people just as she did to allow men to use her body. He couldn’t remember the faces of his ‘targets’ any more than she could those of her clients. Maybe she should be looking for the men who paid Jesse, not Jesse himself.

There will be an inevitable showdown between the two ex-pards. Ben duly delivers the classic line, “There are some things a man can’t ride around” (aka A man’s gotta do what a man’s gotta do). Actually, Burt Kennedy used that same line in Ride Lonesome. And in Ride Lonesome too an Indian wants to trade a horse for a woman. You knew that. And come to think about it, the hero of Ride Lonesome is named Ben. And the leading lady (Karen Steele) is Mrs. Lane. And Claude Akins was Ben Lane in Comanche Station. Something else: O’Brien wears the same outfit as Ms. Steele did in Ride Lonesome. Mmm, I may have to do a PhD on this.

It will not perhaps surprise you to know therefore that Six Black Horses was to have been the eighth Budd Boetticher/Randolph Scott Western. Wow, that would have been something. But it never happened and the picture came to Harry Keller, who first wanted Richard Widmark in the role of Ben Lane.

Keller had specialized in Westerns at Republic. In fact he’d edited Angel and the Badman for the studio in 1947 before starting to direct Allan Lane B-Westerns and the occasional slightly bigger effort such as Rose of Cimarron, and he moved to Universal when Republic went under. There he helmed Quantez (1957) and Day of the Badman (1958) with Fred MacMurray. He also directed episodes of Texas John Slaughter for Disney. Six Black Horses was his last Western as director; he then moved to producing. A couple of years before he had directed Audie in the entertaining Seven Ways from Sundown and he had directed Duryea that year too in Gundown at Sandoval (not yet reviewed). 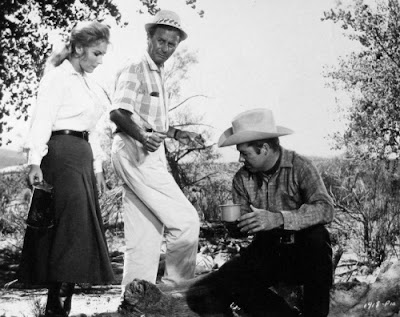 The whole picture, though, has a definite Boetticher/Kennedy vibe: few characters, desert terrain, searching for someone, beset by danger, glam blonde.

Harry Keller wasn't Budd Boetticher, and Audie Murphy wasn't Randolph Scott, but Six Black Horses, which only took a month to shoot, is an honest oater, and Duryea (who also appeared with Murphy in Ride Clear of Diablo in 1954 and Night Passage in ‘57) adds to the appeal. Murphy and Duryea worked very well together. The writing is good. The action scenes are well done (top-notch stuntmen, inc. Henry Wills). The scenery is fine. Bob Steele is a puncher. Ms. O’Brien is attractive (if you’re still allowed to say that); this and a couple of John Wayne pictures, The Alamo and The Comancheros, were her only big-screen Westerns.

And the dog’s good. 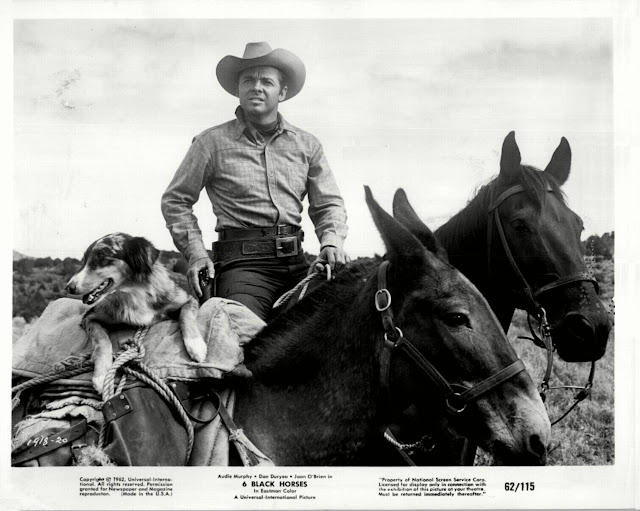 My hero. And Audie.