George is an Indian this time

There’s nothing like a good old 1950s B-Western from George Montgomery. Well, actually, there were quite a lot like George’s, and few would accuse Republic or originality on this one, but you know what I mean. There’s something satisfying about watching the opening credits and seeing which old-timer character actors will be with him in this one. You settle down with enjoyment in your heart. 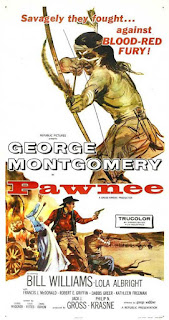 This movie, one of four Westerns George made in ’57, the year before Cimarron City started, was originally released as Pawnee, but it soon became Pale Arrow, for some reason. George plays a white raised by the Pawnee people since he was a boy and destined to take over as head of the nation from his adoptive dad, Chief Ralph Moody. Of course the old chief is all wise and statesmanlike (he’s even named Wise Eagle) but naturally there is a firebrand brave who has no time for all this peace-with-the-white-eyes malarkey; he wants the warpath. He is Crazy Fox (Charles Horvath, one of the best stuntmen in the business, who moved into character parts and played everything from Indian warriors to African chiefs to Mexican bandits).

Crazy Fox and Pale Arrow love the same Indian maid, Dancing Fawn (Charlotte Austin) so that adds to the grrr-factor between them.

The thing is, wagon trains of white settlers are increasingly crossing Pawnee lands and though Wise Eagle wants to come to some peaceful arrangement, Crazy Fox wants to attack them all and kill those darned palefaces. Pale Arrow is on Wise Eagle’s side and he doesn’t want war with his own people. Furthermore, he saves a beauteous white maiden and her crusty old uncle from a war party, and he’d like to see her again. Wisely, Wise Eagle suggests that he join the white world for a bit to see if he likes it. You kinda guess he will. 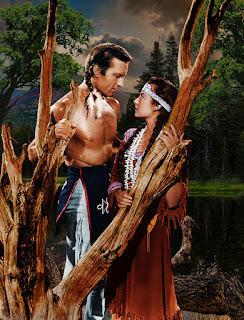 So he washes off his rather snazzy warpaint, puts on buckskins (and that splendid hat he often wore in Westerns) and goes to a saloon in nearby Red Rock, where he overhears the scout of the latest wagon train (Jess Kirkpatrick) quitting on account of them pesky Pawnees. So he volunteers to guide the settlers to Fort Baxter, sixty miles away through Injun territory. These wagon trains are composed of stock footage longshots from other movies intercut with studio photography of the actors in this picture, and most of the film is done on soundstages. It does all look very cheap but hey, we’re not fussy, are we?

It doesn’t take long for the new scout to meet up again with that damsel he rescued, Meg (sultry Lola Albright, later to appear in Branded on TV) and of course it’s lerve. Her crusty old Uncle Tip is good old Francis McDonald, playing up the colorful part for all he’s worth. McDonald is credited by IMDb with an amazing 243 Westerns, from 1914 to 1965. Respect. 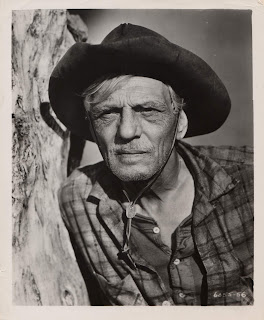 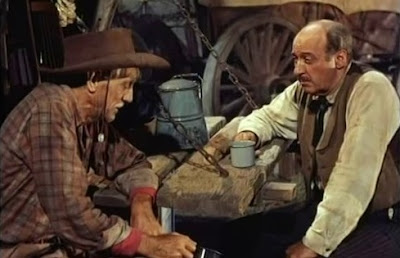 One snag, though. The wagon trail boss, Matt Delaney (Bill Williams, whom I remember from Fighting Man of the Plains and The Cariboo Trail before he became Kit Carson on TV), fancies Meg like mad, so just as back at the Pawnee village Pale Arrow had that rivalry with Crazy Fox, so now, as Paul Fletcher (his anglicized version of Pale Arrow), he has the same awkward situation. However, in both cases the lady in question goes for George, who is much taller and handsomer than his rivals Crazy or Matt.

Ray Hatton has an entertaining cameo as an eccentric old buffalo hunter who warns the wagon trainers of the Pawnee menace. 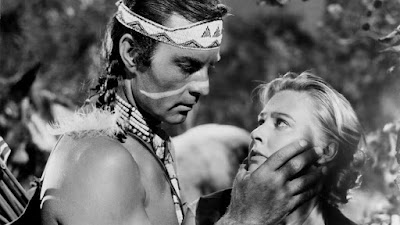 Well, all sorts of adventures occur. George tells the wagon train to move south, so of course they go west. Doh. The Pawnees attack and George gets the blame, even though he desperately tried to persuade the Indians to let the settlers pass. But Wise Eagle has expired and Crazy Fox is now in the ascendant, so the arrows fly.

It was directed and co-written by George Waggner, billed on the screen amusingly as ‘george waGGner’. Probably best known for Gunfighters with Randolph Scott and The Fighting Kentuckian with John Wayne, he had been a silent-movie actor (he was Buffalo Bill in The Iron Horse) and had first directed an oater in 1938, becoming the go-to helmsman for Bob Baker Westerns. Later he moved into TV and did episodes of pretty well every Western show you care to name. 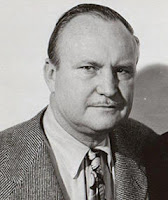 Well, there’s a big battle at the end (more stock footage of Indians attacking from other movies while the principals wait in a cave in the studio) and the US Cavalry arrives at the last moment to save the day, as it classically did in Westerns of the old school. Naturally, there’s a last-reel hand-to-hand showdown between George and Crazy Fox, and no prizes for guessing who wins, or who gets to ride off on a wagon with Meg at the end.  Great stuff, all of it. No high-budget folderol, no angst-ridden psychological interplay, just proper B-Western action throughout. We miss you, George M and George W.

I know it's not really a three-revolver Western but I just couldn't help myself.