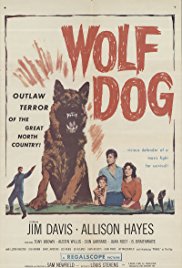 It’s a contemporary Western (set in the 1950s) but it’s a Western alright. Reader John Knight mentioned it in comments on the Jim Davis picture Frontier Uprising, so I thought I’d give it a go. You can get it (in poor quality) on YouTube.

It’s a low-budget black & white B-picture, made by Regal Films (Canada) and shot in Ontario. They used their widescreen process Regalscope so today we view it in rectangular format, wide but not deep.

Jim plays an ex-marine sergeant who killed a man (unintentionally) in a fight and did a stretch for manslaughter. His kindly colonel, though, played by Sydney Brown, lets him have a ranch he doesn’t want, and so Jim, with his wife Ellen (Alison Hayes) and his young son Paul (Tony Brown) decide to run cattle. The trouble is, there’s loathsome landowner neighbor Clem Krivak (Austin Willis) who will stop at naught to get his greedy hands on the ranch. Yep, it’s one of those ruthless-rancher-wants-the-whole valley plots.

And of course the ruthless rancher has henchmen with guns (I think they were obligatory) and a tame sheriff (Edward Holmes). 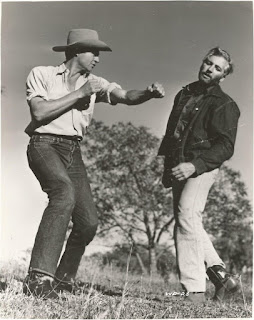 Jim deals with one of the henchmen

Dogs play an important part in the plot, as you may guess from the title. First the villain cruelly sets his fierce brute on poor little Spot, Paul’s mutt, with fatal results – for Spot. Then the boy finds a replacement, half wolf (though it looked just like a German Shepherd to me), which he imaginatively names Dog (maybe that was where Longmire got the idea). Finally there is a showdown on Main Street – between Dog and the bad guy’s (anonymous) canine. You may guess who wins.

The first dogfight causes the worm sheriff to turn, finally finding the guts to stand up to the arrogant town boss. 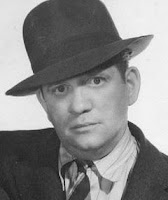 The picture was produced and directed by Sam Newfield (left), brother of Sigmund Neufeld, head of PRC Pictures (often known as Poverty Row Corp). Sam was one of the most prolific directors in the history of American cinema. He churned out B-Westerns for various studios, including Tim McCoy oaters for Sam Katzman. The IMDb bio says that “Sam shot films in two styles: fast and faster.” A week was considered long for filming and he didn’t believe in retakes. Tragically, this was his last Western.

Wolf Dog was written by Louis Stevens, who worked on some really enjoyable Westerns such as the 1936 The Texas Rangers (the Fred MacMurray one), Massacre River (Rory Calhoun and Guy Madison’s first Western), Sante Fe with Randolph Scott, Horizons West with Robert Ryan (a Budd Boetticher picture), The Cimarron Kid with Audie Murphy and Border River, a Joel McCrea movie. It’s not a bad CV. Wolf Dog was also Louis’s last oater.

It’s all a bit family-friendly, and the scenes with the boy and his dog and pony verge on the cloying. But there is a final shoot-out to even things up and make it a bit more Western. Reviews were “mixed” (viz. they slammed it) and the picture seems to have sunk without trace (except in John Knight’s heart) but it does have its naïve charm. It might have been better, though, if they had cast Jim Davis as the ruthless rancher, as in Republic’s excellent The Outcast four years before. 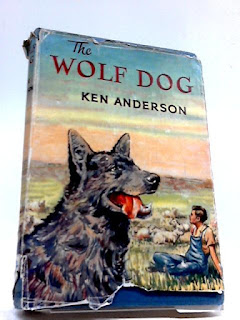 It's not mentioned in the credits but maybe it's the source novel?