As I mentioned the other day when I was reviewing More Dead than Alive, The Baron of Arizona starred Vincent Price. Price is better known to film buffs for the horror genre but in fact he did quite a few big- and small-screen Westerns too, and I think he was good in them. 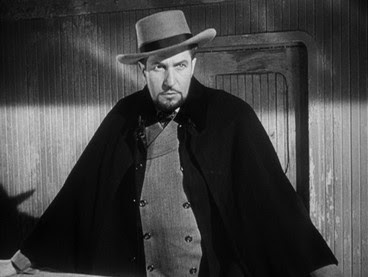 Vincent brings Gothic to the West

To be honest, though, The Baron is really more a Gothic melodrama than a Western for much of its runtime and is really quite Pricey, as Vincent in a clipped beard and sometimes a cape wanders around in Spain and Paris. Still, he makes the movie (I think it would have been a real dud without him). Price has claimed that this was his favorite role.

The project was first bruited before the war and was to have been a Warners picture, Prince of Imposters, with Edward G Robinson as Reavis, but it never happened. 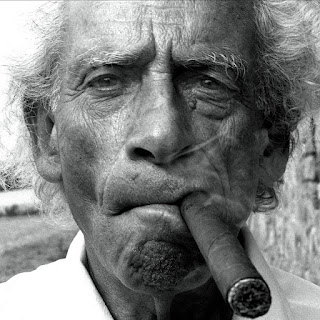 It was directed and written by Samuel Fuller (left) – in fact the title screen grandly announces it as Samuel Fuller’s The Baron of Arizona. Now I am far from a Fuller fan. Cinéastes love him, especially here in France, where they can be rather pretentious about movies, which they call the seventh art (after architecture, sculpture, painting, music, poetry and dance), and they are inveterate auteuristes, foolishly ascribing all creative input on a motion picture to the director. Still, as Fuller often directed, wrote and produced his pictures, which had certain arty tendencies (to offset the sensational subject matter), I suppose they sometimes had a point. In any case Fuller is admirable as far as the Frenchies are concerned. Myself, I find his Westerns lurid and cheap looking. This was his second movie, after the previous year’s pulp I Shot Jesse James. Run of the Arrow in 1957 was absolutely dire, with Rod Steiger overacting even more than usual, and Forty Guns the same year was pretty well trash. About the best Western he did was The Command, with Guy Madison as an Army doctor obliged to take over command of a cavalry troop in Indian territory, but even that was only so-so. To be fair, though (and your Jeff always tries to be that, probably usually failing) if you call The Baron of Arizona a Western it was one of Fuller’s better ones. The tagline was typical Fuller: 'WOMEN fought for his kisses! MEN clamored for his life!' But actually it wasn’t as sensational as that. 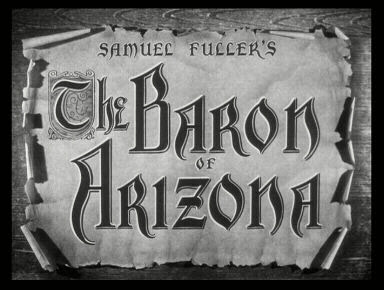 It was a Lippert picture, shot in fifteen days. As you probably know, Robert L. Lippert (1909 – 1976) was the owner of a chain of movie theaters who, angry at the rates the studios charged, went into producing. “Every theater owner thinks he can make pictures better than the ones they sent him," he said. "So back in 1943 I tried it.” He helped finance about 300 movies, all low budget. He said of himself, “The word around Hollywood is: Lippert makes a lot of cheap pictures but he's never made a stinker.” Still, I think we’ll be the judge of that. Lippert did make a few good Westerns, it must be said. I am especially fond of Little Big Horn, for example, a 1951 picture with a superb John Ireland and Lloyd Bridges. 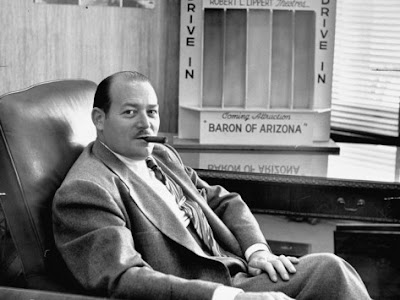 Robert Lippert. I see The Baron of Arizona is coming to one of his drive-ins.

Apart from Vincent lurking sinisterly like a Western Dracula there is more good news: the picture was shot by James Wong Howe, one of the finest cinematographers Hollywood ever produced. He was a master of black & white and of shadow, and with Fuller’s penchant for noir this made for some stunningly good shots, especially, I thought, when the lynch mob was standing in the shadows ready to pounce. The rain and night scenes are also wonderful. Howe was a real artist, and there are scenes in The Baron where that really shows. 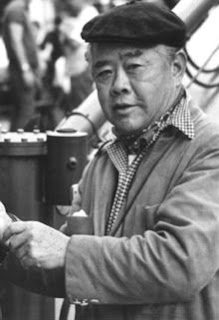 It’s a rather fantastical story of James Reavis (Price), a clerk in the land registry office who cooks up a scheme to get his hands on the whole of Arizona. He takes endless pains forging documents, even going to Spain and spending three years as a novice to get access to the monastery library where the original land grants are housed. In a sort of Anastasia type way he picks a young orphan girl and makes her the heir to a fabulous land grant from King Ferdinand VI of Spain in 1748. Marrying her, he becomes the Baron of Arizona. 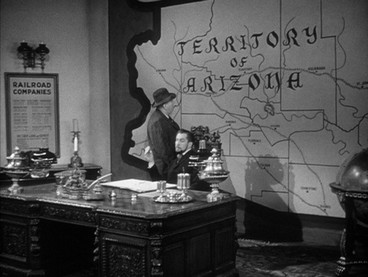 At the height of his power

Amazingly, James Addison Reavis (1843-1914) was in fact a real person who did indeed make himself an ultra-rich land baron, was received by Queen Victoria and backed by the father of William Randolph Hearst but was finally found guilty of attempting to steal most of Arizona by forging land grant documents. He paid a fine of $5,000 and served two years in jail. 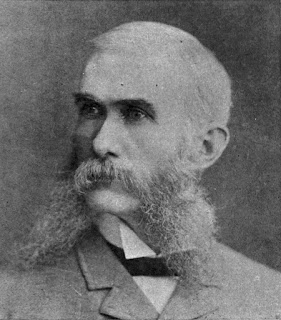 In a way the hero of the tale is Griff, a writer and expert on forgery who works for the government, played by Lippert stalwart Reed Hadley. There’s quite an interesting film-long relationship between the baron and the writer. The former uses the latter’s work as a bible but pretends he hasn’t read it. 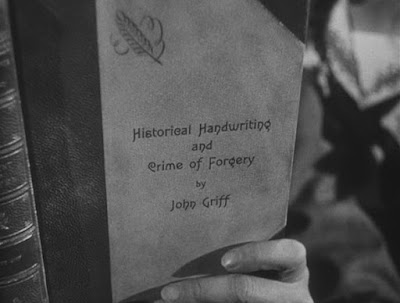 Each seems to have a sneaking admiration for the other. It’s a flashback picture, with Griff on February 14, 1912, with Arizona now a state, telling five other elderly gents the story. 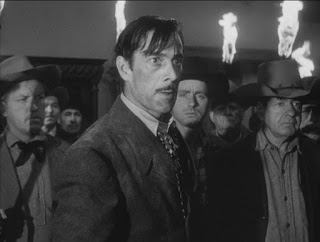 Reed Hadley is after the baron

Ellen Drew plays the orphan girl who grows into a beautiful baroness under Vincent’s tutelage. Drew was noticed by William Demarest while she was working in an LA ice-cream parlor, a classic Hollywood tale, and given a Paramount contract. But she never quite made it big. The IMDb bio says, “She never managed to distinguish herself among the bevy of Hollywood beauties on display and so remained on the outer fringes for most her career.” Westernwise, she starred with Preston Foster in the 1939 Geronimo and was leading lady, hovering between Glenn Ford and William Holden in The Man from Colorado. She was quite memorable, but the twelve Westerns she did were mostly Bs. 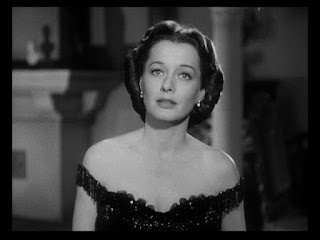 Ellen is the baroness

The monks and Spanish gypsies Vincent falls in with after fleeing the monastery seem to have very American accents, but never mind. Actually, I think Gene Roth, the Father Superior, was from South Dakota but he certainly looks and sounds like a bruiser from the Bronx. It’s quite amusing. 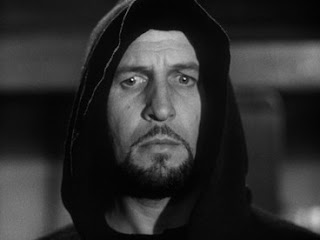 The Arizonan ranchers and farmers who have been dispossessed by the baron and baroness get a bit annoyed. So they resort to that much-loved American institution, as popular as a Thanksgiving dinner or a July 4th parade, the lynch mob. This gives Fuller a satisfactorily (melo)dramatic ending. 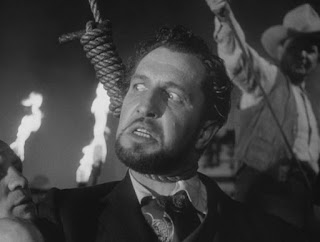 The print has been “preserved” by the Museum of Modern Art. 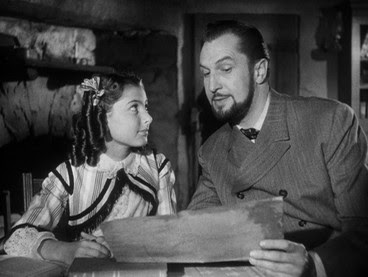 The baron schools his Anastasia

See it, for Vincent Price and the Jimmy Howe cinematography. That's why it got three revolvers. But don’t expect a great Western.