In a comment on Apache Warrior, a Jim Davis Western about the Apache Kid, reader Walter S. told me about a Jack Perrin oater entitled The Apache Kid’s Escape, so I thought I’d better watch it.

Walter said it was hokum and boy, he wasn’t joking.

The first thing is that this is not ‘our’ Apache Kid, the proper Apache one. Jack plays a cowboy brought up near the reservation but a pal reassures us all, “He ain’t no Indian.” Phew. 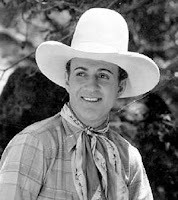 Born in 1896, Perrin (left) entered movies in the very early days – in 1916. And he was to make an astonishing 340 Western appearances in a career that lasted decades. After serving in the US Navy in World War I, Perrin got a contract with Universal, then the largest studio in the world. This was his heyday and he starred in huge numbers of silent one- and two-reel oaters, many directed by Edward Laemmle, nephew of studio boss Carl. But Universal did not renew his contract in 1921 and Perrin descended rapidly into the world of Poverty Row Westerns, riding for ever-smaller studios in ever-more minor parts, using his own name or occasionally the pseudonyms Jack Gable or Richard (Dick) Terry. In the 1930s he was working for companies at the very bottom of the Hollywood food chain.

Robert J Horner (right) resided about as far down Poverty Row as you could get. He wrote, produced and directed literally dozens of ultra-low-budget Westerns between 1922 and ’35, before expiring of cirrhosis of the liver. The IMDb bio calls him "a prolific, if spectacularly untalented producer/director". I’m surprised Horner didn’t photograph and act in his movies as well. It would have saved another few bucks. Quite frankly, many of them were awful, almost unwatchable today. They were theater fodder for undemanding 1930s kids who would be satisfied with any cowboy as long as he had a white horse that would do tricks (Perrin had Starlight). But at least Perrin was still the lead.

He would have further to sink and he ended up with bit parts such as ‘Barfly – uncredited’ in Westerns right through to 1962. Well, I guess he was still working.

The Apache Kid’s Escape was in fact one of the very first Poverty Row talkies. These cut-price studios went on making silent movies long after sound had come in, to ever-diminishing audiences. But somehow Horner got some sound equipment together and made a talkie. The picture still has intertitle cards, though, so looks very like a silent despite the dialogue. Said dialogue is delivered with the utmost ponderousness by all the cast. 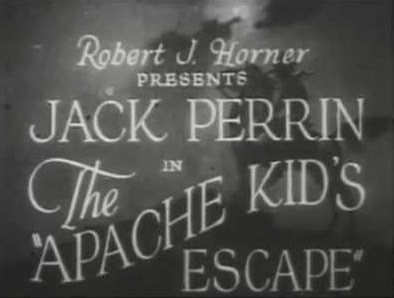 In fact to save even more money, The Apache Kid’s Escape was a straight remake of a 1929 silent, The White Outlaw, an Art Acord oater also directed and produced by Horner.

The Apache Kid (Perrin) is an outlaw determined to go straight but his erstwhile accomplice Buck (Bud Osborne) does the dirty on him, wearing the Kid’s checkered kerchief to impersonate the Kid while robbing the stage. So a sheriff’s posse is after the Kid. 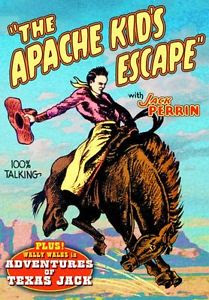 Using the name Jim, he takes refuge on a ranch where he falls into further skullduggery.  Honestly, it’s not really worth recounting further the intricacies of the plot.

There’s an unpleasant stunt as the Kid rides his horse off a bluff into a lake to escape pursuit. There’s also a bit shot at the famous Beale’s Cut (jumped by Tom Mix, driven through in Stagecoach, etc.)

But it’s all distinctly missable, I fear. In fact I would go so far as to advise you not to see it. But if you really insist, it’s available on YouTube, here. 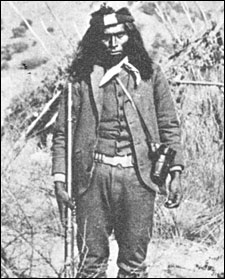 A photograph said to be that of the real Apache Kid
Posted by Jeff Arnold's West at 11:14 AM