Not quite as bad as 4 for Texas, but close

Sergeants 3 is one of my least favorite Westerns. It ought to have been good: John Sturges, who helmed the perfectly splendid The Magnificent Seven, directed, with a decent budget, WR Burnett wrote it – and he had done work of the quality of The Westerner, Yellow Sky, and Colorado Territory - and Winton Hoch, Oscared for She Wore a Yellow Ribbon, shot it in handsome Utah locations. But I agree with Brian Garfield who, in his fine guide Western Films, called it “asinine”. 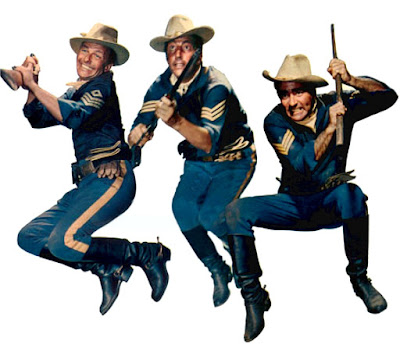 At times embarrassingly bad
This was because it was a ‘rat pack’ production which Frank Sinatra and his buddies put together for their own amusement and profit after Ocean’s Eleven, but they could not be bothered to take it seriously. Sinatra was famously slapdash, refusing to do second takes. 4 for Texas the following year would be even worse. There are parts of both which are embarrassingly bad. 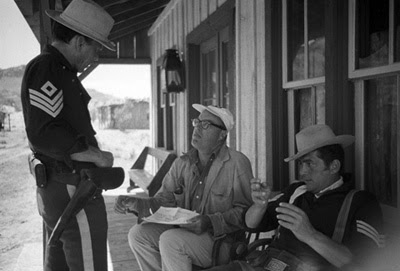 Two of the sergeants on the set with director Sturges. Sturges looks as though he's taking orders. He probably was.
I don’t know how much control Sturges had (more anyway than Aldrich on 4 for Texas), over direction or editing (credited to Ferris Webster) but the picture is too long, meandering and sprawling, and the plot is too weak to sustain the 1 hour 52 minute-runtime. The attack of the Indians on the town is interminable and should have been cut vigorously.


It was a Western remake of RKO’s George Stevens-directed Gunga Din with Cary Grant, based (very loosely) on the Rudyard Kipling poem, but the producers didn’t bother to secure the rights to it and were forced to pay a large fee to the copyright owners before the film could be released. Actually, it’s an insult to Kipling. Sammy Davis Jr played the Gunga Din figure as a freed slave who attaches himself to Sinatra to work “for my keep” (i.e. become a slave). It's equally offensive to Native Americans. 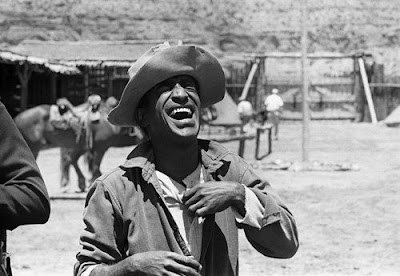 As so often, the butt of the jokes
It’s a really stupid plot in which a huge threat is posed by the Ghost Dancers, Indians of unspecified tribe who practice what is called “a religion of death” (I suppose to make them resemble Kipling's Thugee). We are told the date is 1873 (the Ghost Dance of course became widespread in the 1890s). These Indians attack the town of Medicine Bend (unspecified state or territory). Three US Army sergeants (Sinatra, Dean Martin and Peter Lawford) are sent to investigate and they find the town completely deserted of whites – the film makers never bother to explain how or why. Then, after too long searching the empty town, the Indians attack again, led by Henry Silva, and the clichéd stunt scenes that follow seem endless as Indians fall from rooftops and so on.

Completely unconvincing staging
There are various ‘gags’, such as Dean Martin finding some fireworks which he uses against the Indians, then mixes them up with sticks of dynamite. Another time he plays poker with a blacksmith, raising him some tongs and being called with a monkey wrench. None of these gags is funny, though. There’s a saloon brawl, obviously, how could there not be?


But actually much of it is played ‘straight’ and not blatantly for laughs. If we are supposed therefore to take it seriously, the cast and crew were onto a loser. It falls flat on its face between the two stools of comedy and cavalry Western.

Sinatra disposes his troops
For such a healthy budget the scenes on the rope bridge and in the cave (the Indians’ lair) look very cheap and fake.
Joey Bishop plays a by-the-book fellow sergeant whom the trio despise and mock. The rat pack was there in force, though Lawford and Bishop would soon be exiled.


Silva’s dad, the big chief of all the Ghost Dancers, is Australian Michael Pate – again, obviously. Pate played Indians of every stripe for years and years, in McLintock!, Major Dundee, Hondo, The Great Sioux Massacre, and many others.


Honors go to Dino, naturally. Even when on autopilot (i.e. usually) he was great. 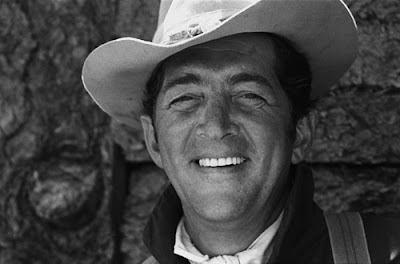 Dino the Great
I did however like the music, by jazz trumpeter Brian May who worked quite a bit with Sinatra and also did the score for Tony Rome.


The movie got lousy reviews, justifiably, but did surprisingly well at the box office. Sinatra said, “Of course they’re not great movies. No one could claim that. But every movie I’ve made through my own company has made money.” Honest, I guess.