Monte Hellman, born 1932, partnered up with the B-movie maestro Roger Corman in the late 1950s, worked on cheap exploitation horror flicks and then joined forces with Jack Nicholson, born 1937 (they met on the set of The Wild Ride in 1960, which Hellman edited). Hellman and Nicholson made a war film and an adventure together in the Philippines for Lippert in 1964, then two back-to-back low-budget Westerns with Corman in Utah, Ride in the Whirlwind and The Shooting (reviewed the other day; click the link to read that), which were premiered at the San Francisco Film Festival in October 1966 but struggled to be released nationwide (except in France, of course, where arty films were greeted enthusiastically, the more obscure the better). They are available on the same Blu-Ray, with various interviews. 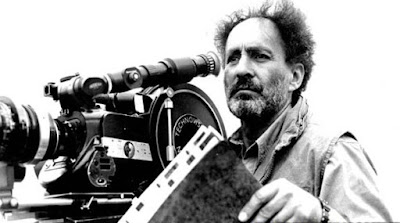 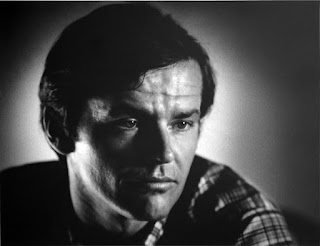 Ride in the Whirlwind opens with a stage hold-up, though without the usual Western chase and pzazz. The coach is moving at little more than walking pace, there are only two passengers and everyone is somnolent. The robbers are not very competent and they get a pittance in loot. One of them is hit and they kill the shotgun messenger.

Then we meet three honest cowboys, riding home to Texas, Wes (Nicholson) Vern (the excellent Cameron Mitchell) and Otis (writer and lobster-diver Tom Giler, chronicler of the South California writers set). They pass a hanging corpse of a man and it darkens their mood, understandably. 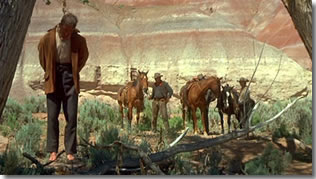 The mood darkens
They rest up at the ramshackle cabin of some dirty men, whom we know to be the outlaws. The cowboys are suspicious of the ragged crew but the eye-patched leader, Blind Dick, played by Dean Stanton (as he was billed then) is hospitable and inviting, so they stay overnight. Mistake.

Harry Dean is the outlaw boss
Early the next morning a posse of vigilantes, anxious to lynch the robbers, comes up, assumes that the three drovers are part of the gang and starts blazing away in the way that lynching vigilantes are wont to do. One of the trio is killed and the other two make it away while the vigilantes are stringing up what remains of the gang, but the pair find themselves in a box canyon. It is hard to evade pursuit but they just manage. 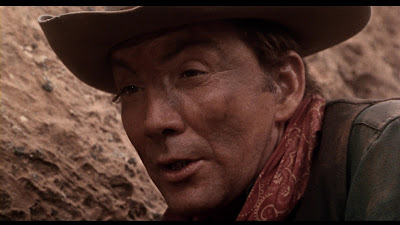 Cameron was never less than excellent in Westerns
It is only now, 44 minutes in, that we meet the second-billed star, Millie Perkins (who had been Anne Frank in the 1959 George Stevens-directed movie and was a neighbor of Hellman's) as Abigail, the daughter of a couple of homesteaders (George Mitchell and Katherine Squire). This is because the two cowpokes, on foot, fetch up at the farm and seek shelter, food and rest. Pretty well the only false note Hellman struck was to have Perkins in 60s false eyelashes.


Hellman and Nicholson spend some time depicting the drudgery and crushing routine of frontier farming life, symbolized by Mitchell endlessly axing a Shane-like stump in the yard. But the cowboys are polite, respectful and unthreatening, even if they do impose their presence on the family. In this way the situation is the polar opposite of that in a modern Western I have just reviewed, Outlaws and Angels. Still, the cowboys need the farmer’s horses to get away on. This will leave the man destitute and he will not stand for it. There will be blood. 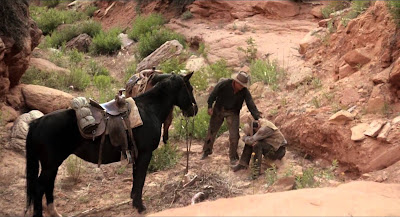 Wes is consoled for  the loss of their pard
The dominant colors of the picture are brown and gray-orange, with dun and tan costumes against a Utah backdrop. This somehow heightens the somber and intense atmosphere. I can’t remember any character smiling. There is no spectacular adventure here, no flashy showdown, no wide open spaces of the West; it’s not a traditional Western in that way. There are no superman heroes or truly evil badmen.


I watched these two movies again the other day, in order to write about them here, and I must say they were better than I remembered.