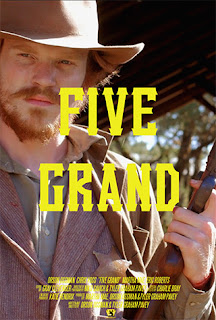 Five Grand (known as The Gunfighter in Canada and England) was co-produced, co-directed and co-written by Orson Ossman and Tyler Graham Pavey, and stars Orson Ossman. It has a fairly traditional plot involving a bad guy taking over the identity of a dead lawman, being pursued by a detective (Chris Voss) as he tries to find the gold bullion, booty from a train robbery. I think the five grand of the title refers to the price of $5000 on the robber's head.


The first part of the movie is probably too slow, as after the initial flurry of action when outlaw Jasper Mudd (Ossman) manages to kill the pursuing and rather sadistic marshal (Eric Roberts), Mudd is then chased by a Pinkerton man in a town suit (Voss) on foot across arid terrain. It is meant to be tense but goes on too long. Actually, pace is not this movie's strong suit. But it does get quite 'psychological Western' as it progresses, and the tension does arrive.

The marshal was probably made a bit sadistic so that we slightly root for Mudd when he gets him, and the same with the Pink: he is efficient and ruthless and rather unpleasant. Which one will win? the viewers may ask themselves, but as both are rather nasty they may not care too much. 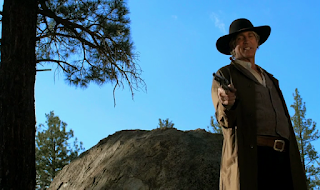 Sadistic marshal has a short part
Mudd is not so efficient. In fact he keeps a wanted poster on him so that when he arrives at a farm pretending to be the marshal, the woman there alone (Martha Magruder) finds it. Later he will steal a horse but lose it. Doh. Still, he does seem quite practiced at killing people, which he does a lot, starting with that marshal, moving on to the woman, then a couple of other wanted outlaws, and so on. The Pink does too, disposing crisply of four Mexican bandits who try to rob him, the woman’s husband who inconveniently turns up, a harmless old prospector (David Ossman, presumably a relation, rather good in the part in a Wallace Ford kind of way) and various others. He seems to have no qualms about murder in pursuit of his single-minded goal of tracking down Mudd and recovering the gold. It is difficult to separate the two psychopathic killers, or identify with either. 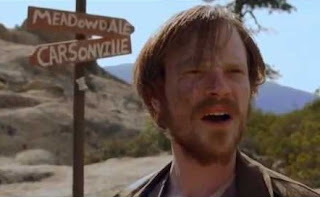 Mudd spends much of the movie with his mouth open 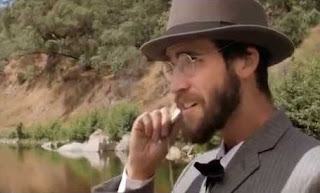 The rather urban Pinkerton
Some of the dialogue is quite good, as when the Pink arrives at the farm and he, Mudd and the woman, who is pretending Mudd is her husband, verbally fence with each other; each knows he is lying and that the others probably are too.


It was shot in nice color by producer/director/writer Pavey in Calico Ghost Town, Yermo, California. 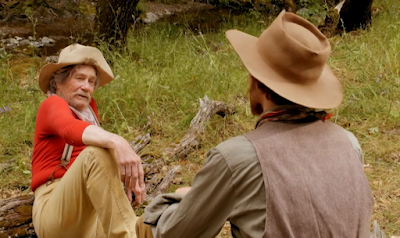 The prospector
It all comes down to a final showdown in a cave, home of a fearsome critter, probably a bear (we only hear the roar), where the gold is hidden and the corpses of most of the robbers too. The Pink arrives and Mudd and they square off. To find out who wins (not that you will particularly root for either, I fear) you must watch the movie, for Jeff Arnold does not deal in spoilers (hem hem).


It all seems a fairly low-budget effort made by a select group of family and friends but it is competently done for all that, and you would watch it.