Many readers will remember the late-1960s TV show The Wild Wild West (which I always felt needed a comma after the first wild), which ran for four seasons and a total of 104 episodes. It wasn’t my favorite, combining, as it did, an I Spy vibe with elements of The Man from Uncle and Jules Verney Victorian gadgets. But it was certainly popular. 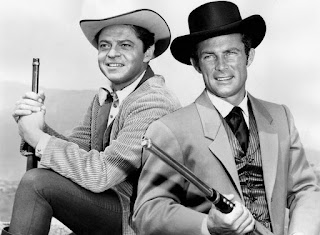 The orginals
There were two TV movies spun off from it, in 1979 and 1980, with the stars of the TV show, Robert Conrad and Ross Martin, returning as James West and Artemus Gordon, secret agents extraordinaires to President Grant. The movies were slightly camper, though Conrad and Martin played them straight as ever.


Surprisingly, in a way, Warner Brothers thought in 1999 that the time was ripe for a new blockbuster movie. And although Mel Gibson was first announced to star, they finally got Will Smith to be Jim West, while Kevin Kline took the part of Artemus Gordon. If you are a Will Smith fan you will probably enjoy the movie greatly. Personally, I think it didn’t quite come off. Actually, nor did Will Smith; he kind of apologized for it later. 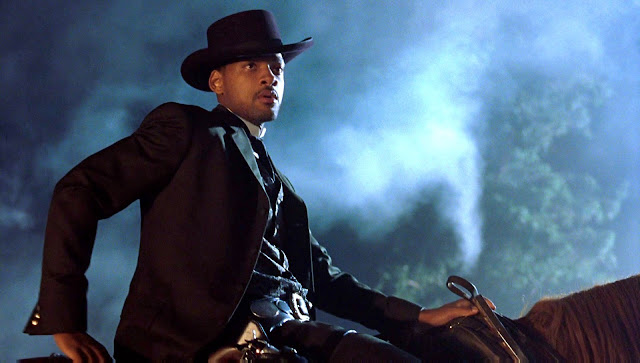 Where there's a Will there's a way
It was certainly big-budget. They had the famous train – a sure sign of $$$ these days – and of course late-90s special effects came into their own. The most famous arch-villain of the TV show had been Dr. Miguelito Quixote Loveless, played by Michael Dunn, a dwarf. This time they got Kenneth Branagh to be Loveless and the technicians cleverly cut him in half. This gives rise to a great many rather weak puns as Smith’s Jim West continually refers to his cut-down status. I must say, Branagh was highly amusing as a kind of camp Bond villain, an evil megalomaniac Confederate with Napoleonic ambitions who believes in a Western version of Vorsprung durch Technik. 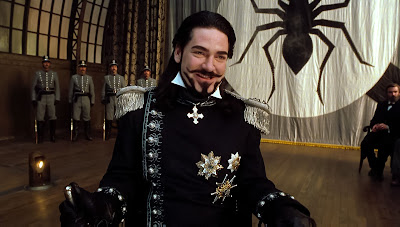 Rather different from Hamlet
Kline’s Gordon goes in, as the original had, for a series of disguises, and of course comes up with endless scientific inventions with which to thwart the bad guys, including a flying machine built from Leonardo da Vinci’s drawings. Star of the show is an 80-foot high steam driven mechanical tarantula. Kline and Smith, though, do not hold back, nor do they play it as straight as the originals did. Some of the humor is, um, broad. 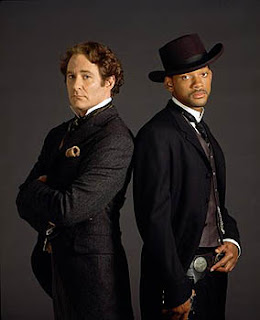 There wasn't much chemistry
Derringers featured large in the TV show and I was very pleased to see Gordon’s belt buckle. He saves the day with what Loveless calls a “pea-shooter” but which achieves a fatal accuracy. 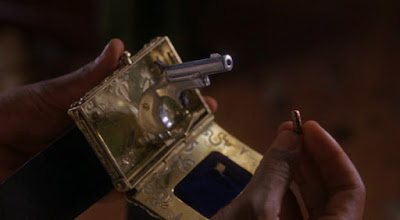 Excellent
The movie opens with the split-screen titles, paying homage to the famous 60s originals. There are other nods to the series.


Wikipedia tells us that


Robert Conrad reportedly was offered the role of President Grant, but turned it down. He was outspoken in his criticism of the new film, now little more than a comedic Will Smith showcase with virtually no relationship to the action-adventure series. In a New York Post interview (July 3, 1999), Conrad stated that he disliked the movie and that contractually he was owed a share of money on merchandising that he was not paid. He had a long-standing feud with producer Jon Peters, which may have colored his opinion. He was offended at the racial aspects of the film, as well as the casting of Branagh as a double amputee, rather than a little-person actor, in the role of Loveless.


The entry adds that


Conrad took special delight in accepting the Razzie Awards for the motion picture in 1999. It was awarded Worst Picture, Worst Screenplay, and Worst Original Song.


The movie was produced and directed by Barry Sonnenfeld, who started as cinematographer with the Coen brothers and went on to direct the acerbic comedy The Addams Family. I must say that later efforts like Get Shorty and Men in Black were pretty good. There is something slightly Men in Blackish about Wild Wild West. 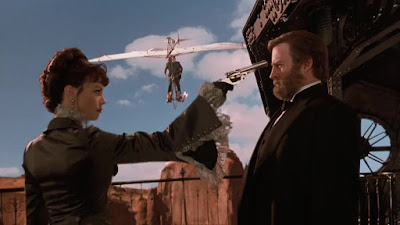 That's no way to treat the President. But the deus ex machina approaches.
Some of the critics didn’t like it. Roger Ebert called it “a comedy dead zone. You stare in disbelief as scenes flop and die. The movie is all concept and no content.” Myself, I didn’t think it was that bad.


You could probably watch Wild Wild West. Once. Salma Hayek is pretty sensational. 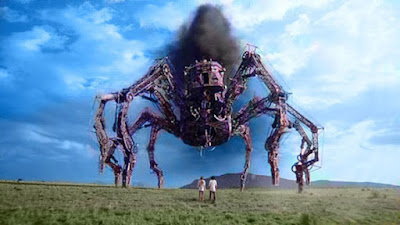