We’re getting mighty close to the end of that long trail which we have been following since May 2010, whose destination is the nirvana of having seen and reviewed all Randolph Scott’s Westerns. Only half a dozen of the sixty-odd remain, and one of those is about to be dealt with. The others, a few of Paramount’s Zane Grey second-features of the early 1930s and Warners’ Sugarfoot (1951) are not currently available either on DVD or YouTube, so they’ll have to wait. 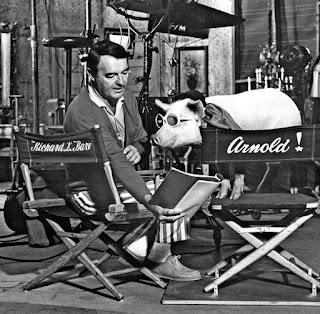 Director Richard Bare, on set with one of his stars
Yes, Shoot-Out at Medicine Bend was a 1957 Randolph Scott Western. But the first thing to put out of your mind is any idea that this one was on a par with that year’s Decision at Sundown or The Tall T, for Columbia. We are not talking color, for one thing: this was a black & white B-Western released under Warners’ First National brand. And forget Budd Boetticher, too: Medicine Bend was directed, clumsily, by Richard L Bare, who did mostly TV, working on a number of different small-screen Western shows, but whose last big-screen Western this was of only a handful he did, all weak. 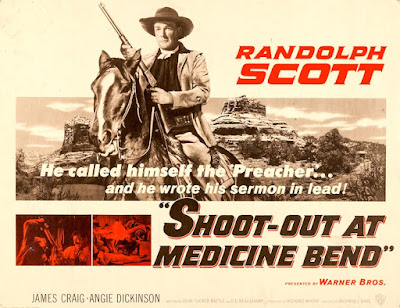 Actually, the poster is wrong: he doesn't call himself a preacher at all
So don’t expect too much. Furthermore, the writing was clunky, despite the contributions to the screenplay of DD Beauchamp the Great. The plot is implausible, verging on the silly. Some of the dialogue is leaden. Quakers feature strongly – they are called Brethren – and so there is much theeing and thouing, but Beauchamp and his co-writer John Tuttle Battle have no idea at all of the difference between the pronouns, so the characters get it all wrong. This was a common fault with thee-and-thou Westerns. One thinks of Proud Rebel, Angel and the Badman, Friendly Persuasion, and others.


But the movie does have interest. For one thing, it was an early Western of both James Garner and Angie Dickinson. It was in fact Garner’s feature Western debut. He plays an Army sergeant recently mustered out along with his pals, while Angie is a prim and prudish storekeeper’s daughter, who prefers to refer to sour-belly pork as sourbosom because it is more genteel. Such idiocies were of course common among women in the nineteenth century but they didn’t have to include them in the dialogue; it does Angie’s character no favors at all. 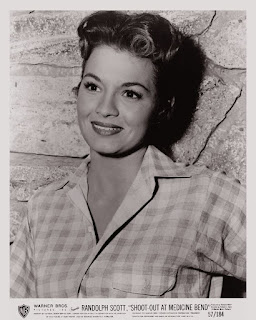 Sourbosom
It opens with the three recently ex-military amigos, Randolph Scott, Jim Garner and Gordon Jones, turning up at Randy’s brother’s farm and driving off Indians who are attacking it. Unfortunately, though, the brother is killed because he has bought faulty ammunition, which won’t fire at the vital moment. So Randy vows to go to Medicine Bend, where the farmer bought it, and get his own back on the crooked merchant who sold it. On the way, the three bathe in a pool and some Medicine Bend thieves steal their clothes and horses, so we have the memorable scene of Scott, Garner and Jones walking up to the camp of some religious brethren in grass skirts. The brethren kindly give them some clothes and they decide to keep wearing them once in town, disguising themselves as brethren. 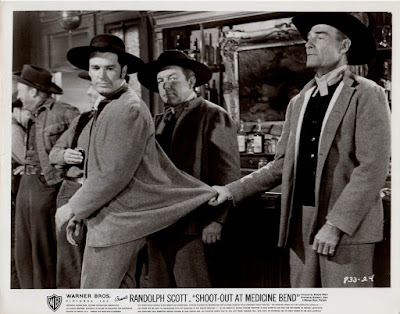 He restrains Garner from enjoying himself too much in the saloon
See what I mean by a bit silly?


There are some enjoyable character actors in town. Trevor Bardette is the corrupt and lazy sheriff, Myron Healey is a henchman and good old Harry Harvey is Angie’s dad, the honest storekeeper. You might spot Jack Perrin as a customer in the saloon.

The chief villain, who owns the rival store and who sold the dud ammo to Randy’s bro, is second-billed James Craig (left), suitably attired in frock coat and silk vest and sporting a caddish mustache and oiled hair, but missing, sadly, a derringer, which would have completed the ensemble to a T. Craig was a poor man’s Clark Gable at MGM in the 40s but descended into B-Westerns before calling it a day and going into real estate. Fort Vengeance in 1953 was about his best big-screen oater but it was only relative. He is satisfactory as the crook who owns most of the town and wants the rest. Naturally he will get his come-uppance, along with his henchpersons, once Randy and his pards get going. Randy cheats rather, by exchanging his Quaker garments for some black duds stolen from the villain’s store and appearing masked in town from time to time exactly like the Durango Kid.


There’s another lady, a saloon gal with the required heart of gold, Nell (Dani Crayne) and she gets a song, Kiss Me Quick, and later helps out the hero, finding her employer (Craig) too skullduggerous for her liking. You see, it’s all pretty formulaic and by-the-Western-book. Actually, I think Ms. Crayne did a better job than Angie in this one, but then Angie’s part was saccharine to a degree. 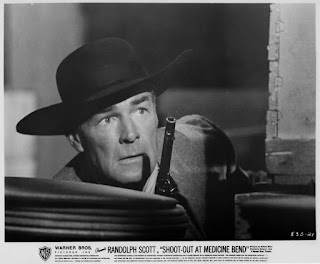 Brother with a gun
Randy seems to have forgotten that he had been marshal of Medicine Bend only two years before, in A Lawless Street. Perhaps it was amnesia.


The basic idea seems to be that the best way to deal with thieves is to steal from them. That may be right, though I’m not sure the great philosophers (or indeed the Brethren elders) would quite agree with its moral foundation. 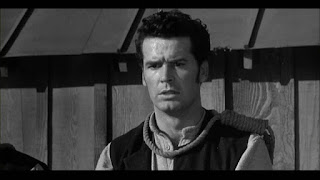 Awkward moment for Jim
Of course poetic justice prevails when at the showdown villain Craig loads his rifle with his own ammo and guess what, it won’t fire. I said he should have had a derringer.


I fear that Shoot-Out at Medicine Bend is far from Randy’s best oater. Of course it’s watchable; any Randolph Scott Western is (well, except Belle of the Yukon, maybe). But with the best will in the world (and anyone will tell you I have that, hem hem) I couldn’t give it more than two revolvers, even with Randy in it.


Thee has been warned. 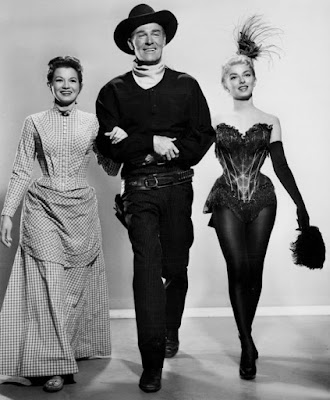