Kevin is a homesman

One is tempted to be rather dismissive of Hallmark-style TV Western movies or low-budget straight-to-video oaters, and yes, they can be on the bland side and not terribly authentic. But to be fair, some are quite presentable and a few are even downright good. Certainly many are no worse than the old B-Westerns we used to see in movie theaters back in the day, and, just occasionally, one rises above the moderate standard.


Kevin Sorbo, Hercules no less, has only appeared in four Westerns (so far) but they haven’t been at all bad. He first starred in Avenging Angel in 2007 (not that hot), did Prairie Fever in ’08, was in Shadow on the Mesa in 2013 (quite good) and played a (rather unconvincing) 81-year-old Jesse James in Jesse James: Lawman in 2015. All of these are at least watchable. Mr. Sorbo has a quiet-but-tough mien which suits the Western. 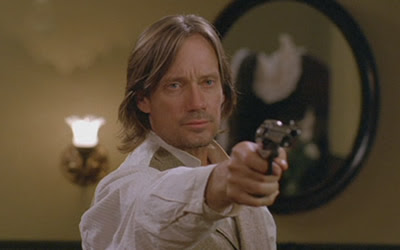 Hercules goes West
In Prairie Fever he plays Preston Biggs, a washed-up lawman who has become a drunk after, oops, accidentally shooting his own wife in a bank hold-up in his town, Clearwater (a name beloved by Western writers). Now he just observes crime in the saloon, through a whiskey glass. Two thugs he had sent to the pen when he was sheriff come in looking for revenge now they are out, a fight ensues and Biggs beats them but lands up in jail, unable to pay any fine.


He is given an out, though. He agrees to take some mail-order brides who have “the prairie fever” by wagon to the take the train in Carson City (we know there’s a railroad there because Randolph Scott built it in 1952). "Prairie fever" is a euphemism for their having become mentally unbalanced because of the brutal lifestyle on the frontier. This notion of deranged women being taken ‘home’ – back East – was of course finely treated in Glendon Swarthout’s superb novel The Homesman in 1988, and a quality movie, also entitled The Homesman, was made of it with Tommy Lee Jones in 2014. I don’t know if the directors of Prairie Fever (Stephen Bridgewater and David S Cass Sr.) or the writer (Steven H Berman) had read this book, but there are certainly similarities.


Frontier life was undoubtedly extremely harsh for farming women in the late-nineteenth-century West and many cracked under the strain, physically or mentally. There were asylums, often in cities like St Louis, where those who had lost their minds were incarcerated. The whole notion of ‘mail-order brides’ seems obnoxious to us now but was common then. Men vastly outnumbered women as a proportion of the West’s population. The splendid film Westward the Women treated that theme with compassion and sensitivity. So many of the wives had no idea at all of what was in store for them out West and when they got there, many were treated practically as unpaid servants and worked beyond their capabilities. It is an unlovely story.


Various threats are added to the mix in Prairie Fever to make the trek more dangerous. Those two thugs turn up again, the ones that Biggs had bested in the saloon, and then there is the deadly gambler Monte James, whom card-sharping partner Olivia, abused by him (it’s a sort of Doc Holliday/Big-Nose Kate relationship) has trussed up before skedaddling, taking her share of their ill-gotten gains. He follows, bent on vengeance, and when Olivia joins Biggs’s party (luckily she has a soothing effect on the mad women) Monte becomes a real danger. 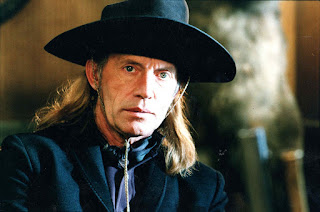 Lance in his best role 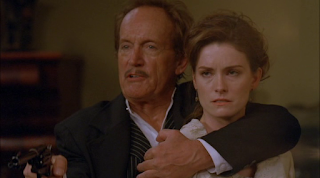 Now he puts Kevin in the same situation as before: will the hero react the same way?
Gambler Monte is played by the excellent Lance Henriksen, unforgettable as the cannibal gunman in Dead Man, who also appears (less memorably though) in The Quick and the Dead and Appaloosa (he is Ring Shelton in the latter). Sadly, however, he is written out for all the middle part of the movie, only re-appearing once they get to Carson, and even then kind of fading away before any proper showdown. Olivia is played by Jamie Anne Allman, more recently of The Killing, and she wears a man’s suit (stolen from Monte, I think) and is generally dominant and feisty in a 21st century way. Her skills with a rifle come in handy and she bosses Kevin about until finally it's lerve. 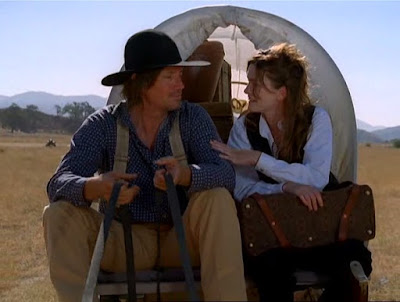 It's lerve
There are also two brothers, one of whom, Frank (Silas Weir Mitchell) has given over his crazed spouse to homesman Biggs. She has become a religious maniac, spouting endless scripture, enough to drive even the sane members of the party to the brink. Frank’s brother Charlie (Blake Gibbons) wants back the money that Frank had given Biggs for the transaction. It turns out that Charlie had forced himself on her; that was what drove her mad, and Leviticus 20:21 is her favorite text. This part is all a bit on the improbable side, it must be said - I mean the brothers pursuing, not the thou shalt not/brother's wife bit. But anyway there are quite a few menaces to the party of women + Biggs to be dealt with, one way and another.


The mad women are played by Felicia Day as the bible-quoting gabbler, Dominique Swain as the artistic Abigail and Jillian Armenante as the musical Lettie. All are gradually calmed by the kindness and care of Olivia and Biggs. Ms. Day is very beautiful; I’ve seen her before somewhere but can’t think where. I don’t know Ms. Swain, who has rather modern Californian diction. Ms. Armenante bears a remarkable resemblance to William Bendix, which is nice.


One fault the movie has, in common with all these recent TV ones, is that all the actors are clearly wearing costumes. This is one noticeable difference with Westerns of the twentieth century. The characters can’t carry off their Western garb; they just don’t look natural in it at all.


It all ends rather too neatly as the women regain their sanity, Biggs stops drinking, the badmen are killed (except Monte James who drives off for Kansas City leaving Olivia in the arms of the now sober Biggs with her share of the money) and they all lived happily ever after. Spoiler alert, oops, too late.


You could watch it.