Not as bad as I feared

In its review of the picture, The Times of London at the time wrote, “As a work of art the film is negligible, but as a musical comedy it is delightfully refreshing.” I must say I agree with Robert Nott, in his excellent book The Films of Randolph Scott, when he suggests that the exact opposite is true: as a musical comedy it is pretty weak, with rather unmemorable and truncated songs, a male lead who doesn’t sing at all and, in the second half, hardly any music, or comedy either.


To me, this makes it a better movie. I must say my heart sank when I put the DVD in the player and settled down to watch. I am not a fan of musicals, at all, and a story about oil strikes and pipelines in Pennsylvania is hardly very Western material either. I only watched it out of a completist desire to see every Randolph Scott Western, including those which are semi-Westerns or barely Westerns. And when the title screen comes up (in black & white) and we are informed that “Adolph Zukor presents Irene Dunne in…”, with all mention of Randy consigned to smaller and later credits, my heart plummeted further. Sorry if you like Irene Dunne, and I know she came straight from stage and screen successes in Showboat (happy for you if you like that kind of thing), but she opens with a galumphing dance which has all the grace of that of a chimpanzee in hobnailed boots and she sings the title song in a voice that is certainly sweeter than the sound of a mule braying in a railway tunnel but not by much. It is not a good start. 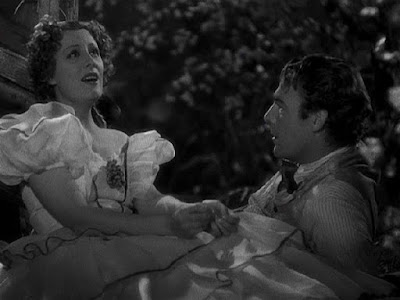 Dunne serenades a mute Randy
She is supposed to be Sally, the daughter of the proprietor of a traveling medicine show. At least said owner is played by Raymond Walburn, amusing as ever (he always gave the same performance, whatever part he was given). And other cast members also lift the picture, especially a wonderful Alan Hale Sr. as the railroad-baron villain Walter Brennan (I don’t know if Walter Brennan ever played a character named Alan Hale but it would have been symmetrical). Hale comes near to stealing the whole show. His henchman is nasty whip-wielding Red Scanlon, excellently played by Charles Bickford (what a fine actor he was). Other memorable actors are Akim Tamiroff as the slimy saloon owner Joe Varese and Irving Pichel as the exceedingly unpleasant puritan Stark who is trying to rid the boom town of its “less desirable” residents, without understanding that he is the least desirable one of all. Pichel was an interesting chap, in fact. He would later direct Randolph Scott in a Western, Santa Fe, and it is his voice narrating She Wore a Yellow Ribbon. 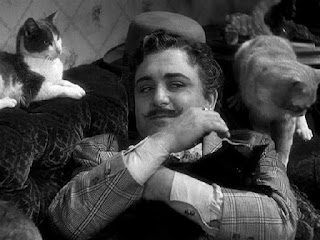 Tamiroff is cat-loving saloon keeper
But the star of the show, more even than Dunne, is Randolph Scott. Rarely if ever did Scott so throw himself into a part. He plays the country-boy farmer drilling for oil on his land who falls for the show singer, and in this part the character he plays is rather sweet and charming. But gradually he becomes more and more obsessed with the oil until he is not just a workaholic neglecting his new bride, and failing to build the home he has promised for her, but indeed he teeters on the edge of madness, or monomania anyway, as he claws his way to defeating the railroad, whatever the cost, and getting his oil to market through the pipeline he has invented. Scott’s Peter Cortlandt is hard to like, and he is almost as much a ruthless capitalist as the railroad boss he is trying to best. It’s very well done, and as far as the movie is concerned, it starts a rather trite musical but becomes more and more Western as it goes along. Good. Scott himself was proud of his performance, and justifiably so. 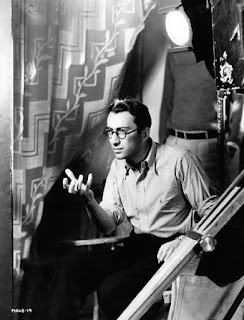 Rouben Mamoulian, the director, on the set
The finale is verging on the weird, for a Western anyway. There’s a last-minute dash to get the oil to market that reminds us of In Old Oklahoma aka War of the Wildcats, a John Wayne/Walter Brennan  picture of 1943 which certainly is a Western. I am sure that the makers of that picture had seen High, Wide and Handsome. But unlike the Wayne one, this film has Dunne, who has left her husband to join the circus, leading a charge of circus folk and animals to save the day and beat the Hale-Bickford thugs. In scenes that appear surreal an elephant lifts Bickford and tosses him to the strongmen and midgets to dispose of. It must qualify as one of the most bizarre come-uppances ever for a Western villain.


The best song, by the way (because I do like a good song in a Western even if I dislike musicals) is when Dunne and ingénue Dorothy Lamour, playing a saloon tart Dunne is trying to help, sing Allegheny Al in an insalubrious ale house. At least we get one memorable tune to hum. The others, even the famous Folks that Live on the Hill, are distinctly forgettable. 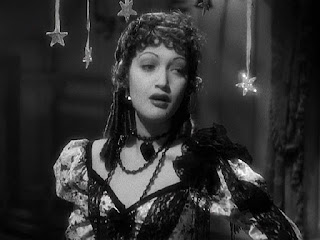 Lamour (no relation to Louis, sadly) has a good song
The picture was not a huge critical or commercial hit. Zukor, who had lauded Oscar Hammerstein fulsomely at the preview, cut him dead when it flopped. Zukor was clearly not a gentleman.


Scott’s contract at Paramount was running out and he had not been a stellar success. He was negotiating deals with other studios. The big-budget The Texans, a more Western Western, with the real Walter Brennan, would be his last Paramount picture.


Ready to give a one-revolver rating and the thumbs down before I saw it, I must say that my opinion changed for the better as the movie progressed, and overall I think you could give this one a go.