War to the knife

Only a Western inasmuch as eighteenth-century sword-and-musket dramas are ever Westerns, this Netflix series does at least give us badmen and Indians on the (then) far West frontier, so I feel (almost) entitled to review it on this most Western of blogs. We are in the Hudson’s Bay area sometime in the reign of George III (1760 – 1820). The Hudson’s Bay Company has a monopoly on the fur trade, in theory anyway, and its powers-that-be are completely ruthless in their determination to maintain it, while various other interests, local, Scottish and American, are equally decided in their intention to grab a share of the lucrative trade for themselves. That’s about the plot of it. 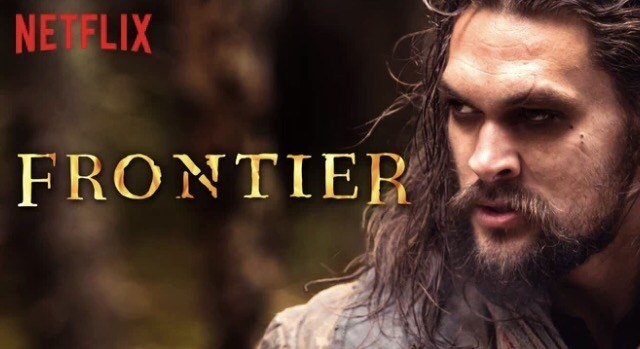 It’s a Canadian effort, Netflix making it in association with Discovery Channel Canada and shooting in Newfoundland, Labrador and other Canadian spots (as well as the odd scene in Cornwall, England). Canadian-American Brad Peyton is an executive producer and directed some episodes. Peter and Rob Blackie wrote and produced much of it. It’s all in rather grand “4K ultra high definition” apparently. Anyway, it looks good on my big TV screen.


As with the American series Hatfields & McCoys, made with History Channel, we are probably entitled to a reasonably accurate historical portrayal in Frontier, though it all does seem quite sensational, and I’m not sure if the characters really existed – probably not. Certainly they don’t speak in any authentic eighteenth-century way, for their dialogue is peppered with current usages such as “It is what it is” or twentieth-century ones like “You do not get to walk away” or nineteenth-century ones like “sabotage” or “paranoid”. It must be hard for writers to avoid all such anachronisms. Perhaps they should have read a lot of period texts before sitting down at the computer, to get in the mood and style.


The cast is international. The star is Hawaiian Jason Momoa, formerly of Baywatch, who plays the big, bearded Declan Harp, mixed-race foe of the HBC with an especial loathing for its boss Lord Benton, who used to treat him as an adopted son but was responsible for the death of his wife and child. The main thrust of the series is the war to the knife (literally, unfortunately) between these two men. Benton is brilliantly played by British actor Alun Armstrong. He skillfully invests the character with deeply repellent nastiness. 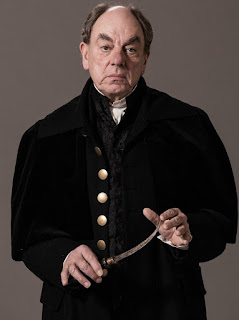 Armstrong excellently repellent as Lord Benton
Friend and possibly lover of Harp is the ale-house owner Grace Emberly, played by another Brit, Zoe Boyle, Lavinia Swire in Downton Abbey. Unfortunately, though, in Frontier her Scottish accent is so thick and Mr. Momoa’s diction so poor that I needed subtitles when they were speaking to each other.


There’s another nasty HBC man, a redcoat, Capt. Chesterfield, who supplants Benton and takes over as governor himself, played with a bovver-boy London accent by Evan Jonigkeit, an American, I think. He marries Grace in a business arrangement but they don’t get on. 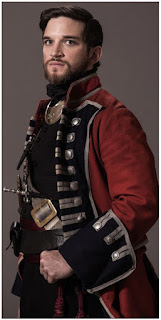 Equally ruthless (or roofless, as he would call it)
Then there’s a Yankee trying to muscle in on the fur trade, a certain Samuel Grant (Shawn Doyle). He is no less ruthless and unpleasant than the others, and he has a murderous henchman, Mr. Pond (Greg Bryk), who is also his lover. And no nicer is the cold-as-ice Elizabeth Carruthers (Katie McGrath) who, when Pond murders her husband on Grant’s orders, takes over the company, marries another competitor and starts her own trade war against the HBC.

The Yanks are coming, too: Grant and henchman Pond
There’s an amusing renegade priest played by Christian McKay. Well, well, there are many other characters. I won’t tell you about them all. Most of them, though, are pretty vicious in one way or another, and few are easy to like. They are all after power, and essentially that is what the series is about. The female characters are all appropriately feisty and in control for 21st-century audiences. 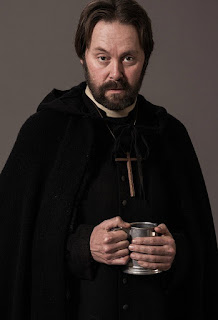 The archbishop wouldn't entirey approve
There’s plenty of gore, and some sex with moderate nudity. Nothing to get the smelling salts out for.


It’s all quite gripping, in a way, and I was happy to watch till the end, despite the odd weakness. It has little of the quality of Netflix's Godless, though.


Season 2 ends with a classic cliffhanger. I don’t know if season 3 was already signed up when they made the last episode but they more or less have to have another season now. They can’t leave it like that! If they do a season 3, I’ll update this post.