The Man Behind the Gun is one of the most entertaining Randolph Scott Westerns. No one would pretend that it is a great example of the genre, and of course 1953 was the year of mighty pictures like Paramount’s Shane, MGM’s The Naked Spur and Warners’ own Hondo. But there is a crackle of humor throughout the movie and Randy seemed to be enjoying himself hugely. There are even bawdy jokes that must have sneaked somehow under the censors’ radar. And it’s in bright Technicolor and packed with action. It’s a whole lot of fun. 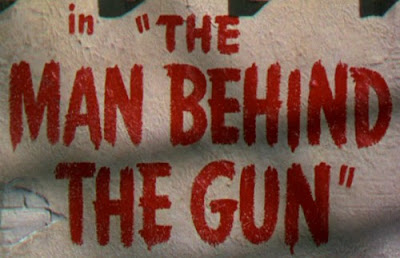 It’s a California Western, almost a sub-genre. It’s odd to see the ocean in a Western, somehow. It is set in pre-Civil War LA, with the usual California plot of traitorous politicians wanting to secede to make a slave state, though the date doesn’t stop the writers having a bit in which Randy on the stage admires the “new-fangled six-shooter” of one of the passengers, who has somehow acquired an 1873 Peacemaker. Actually, this early scene is a straight steal from Virginia City, with Scott doing the Errol Flynn bit of surreptitiously unloading the pistol and the great Anthony Caruso taking Bogart’s role of bandit holding up the stage. Pity it was a Colt and not a derringer, as in Bogie’s case, but never mind.


Randy is pretending to be a disgraced Army man, posing as a bookish schoolmaster who is no good with guns. Of course we all know he is no such thing. Like Gary Cooper in Springfield Rifle the year before, he is actually undercover, and he is aiming to defuse that heinous secesh plot. 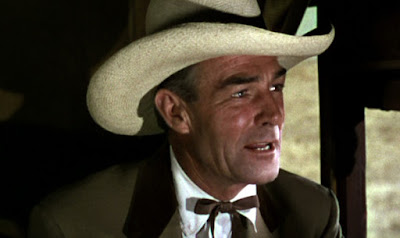 Our hero
He has two sidekicks in the shape of whip-wielding Monk (Dick Wesson) and burly Olaf (Alan Hale Jr.) Wesson, who was the comic relief in Calamity Jane the same year, only did three Westerns (the other was the Guy Madison outing The Charge at Feather River, also in ‘53) but he had a comic gift and is amusing in this one. At one point he has to dress up as a settler’s wife on a Trojan-horse wagon full of hidden soldiers and so there is plenty of scope for broad 1950s cross-dressing humor. He even toys with using a couple of oranges as breasts, but I don’t know how that got past the Hays Office in the early 50s. As for Alan Hale, the son of Errol Flynn’s buddy Alan Hale Sr., he had a long career well before Gilligan’s Island, and did huge numbers of big- and small-screen Westerns from 1947 to 1975. He was always enjoyable to watch. He plays a strongman who manages to lift a huge rock to win $500 (though the onlookers do not know that Dick and Randy are in the cellar below, levering the boulder up). 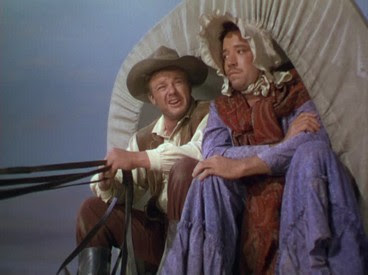 Hale and Wesson do their schtick
The villains are Morris Ankrum and Roy Roberts, so that’s good. Like most besuited politicians in Westerns, they are corrupt, scheming, ruthless and evil. Plus ça change... The excellent Douglas Fowley is there too, as the crooked saloon keeper. I always like Douglas.


There are two dames for Randy to hover between, as was conventional, a prim blonde one, the real schoolteacher, Lora, and a racier and sultrier saloon gal (actually she’s the co-owner of the joint), Chona. Lora is played by beautiful Patrice Wymore, who had starred with Errol Flynn (that man again) in Rocky Mountain in 1950, becoming Mrs. Flynn later the same year. She had been in The Big Trees with Kirk Douglas in '52 but did no other big-screen Westerns (though quite a few TV ones) before retiring to care for her ailing husband. The fiery Lina Chomay, who had been a singer in Xavier Cugat’s band, is saloon singer Chona. She is also, it turns out, leader of the gunrunners, storing rifles and powder in her saloon cellar (Randy discovers the guns there while helping Olaf lift the rock), and she is a crack shot too. In an enjoyable reversal she tells her men to run for safety while she holds off Randy effectively with her (1870s) six-shooter. It was the last picture of Ms. Chomay’s too-short career. She retired from film making after marrying the wealthy grandson of railroad magnate Jay Gould. “I know I looked like hot stuff in my movies,” she said years later, “and I was hot stuff!” I am forced to concur. 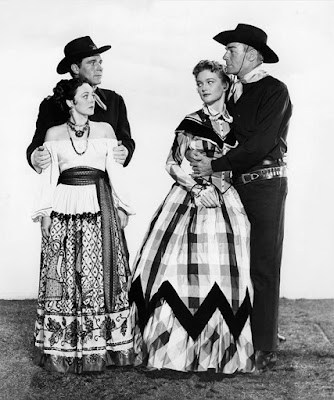 Phil is engaged to Patrice but fancies Lina, while Randy eyes up Lina but may go for Patrice: it's all pretty tense, my dears
Phil Carey is there, as an Army captain whom we first suspect to be in cahoots with the bad guys but who turns out to be a moderately good egg. He and Randy are rivals for the attentions of both dames. Carey was busy out West that year, what with Gun Fury, Calamity Jane and The Nebraskan.


The picture was directed by Felix Feist (rather a good name, that) who had done The Big Trees and who would later also direct The Californians on TV, so he was a bit of a California-Western specialist. 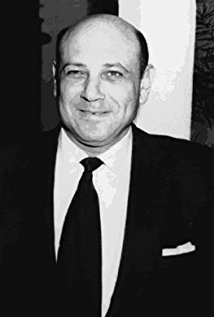 It's a Feisty picture
It was written by John Twist, Warners B-Western regular, who had also worked on The Big Trees, as well as on Dallas and Fort Worth (another Scott picture), from a story by Robert Buckner, who did Flynn Westerns Santa Fe Trail, Dodge City and Virginia City. It’s all historical hooey, of course, but they put together an action-packed plot with explosions, horse chases, skullduggery galore and gunfights aplenty. Actually, some of the horse chase footage was lifted from San Antonio, the flat, dusty Texas scenery looking out of place among the lush Californian greenery. I think Jack Nicholson must have seen this movie because there’s a sub-plot of cutting off the water for nefarious ends. It’s a kind of Chinatown ante diem. There’s a stunt I didn’t like in which a horse is ridden off a bridge into a river. The horse is shown walking out of the river afterwards, to reassure us, but that bit is clumsily edited in and I reckon it was another horse.


The Californian locations were nicely shot by good old Bert Glennon, a John Ford (and Errol Flynn) regular. Music is by David Buttolph and suitably rambunctious. The whole thing is full of energy.


One interesting thing: Joaquin Murietta features in it. Murietta, or Murieta or Murietta, as you prefer, played here as a dashing young smiling bandit by Robert Cabal, Hey Soos in Rawhide, was known as the Robin Hood of El Dorado, and he was a Mexican patriot hero/villainous bandit (you choose) who was the model for Zorro. Walter Noble Burns wrote a sensational biography of him in 1932 and Warner Baxter played him in the 1936 MGM film directed by William A Wellman. He was apparently found and killed, and then beheaded, by some California Rangers in 1853, though conspiracy theories abound and many believe the amputated noggin was not that of the colorful brigand. 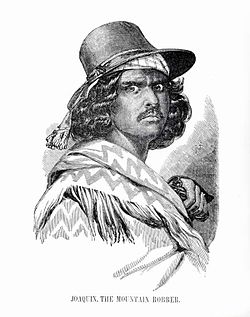 A dime-novel idea of Murietta 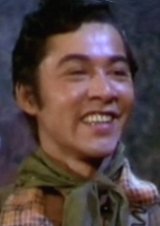 Cabal as Murietta
The title, rather similar to Columbia's The Stranger Wore a Gun of the same year, was to have been City of Angels, which I rather like, but Warners preferred Man with the Gun. However, that had been snaffled by RKO for Bob Mitchum - it would come out in '55 - so the studio contented itself with Man Behind the Gun. OK, whatever. At least Nicolas Cage and Meg Ryan were able to grab the title nearly half a century later.


In any case this is a must-see for Randy fans, and in fact all Westernistas worth their salt will want to have a go. 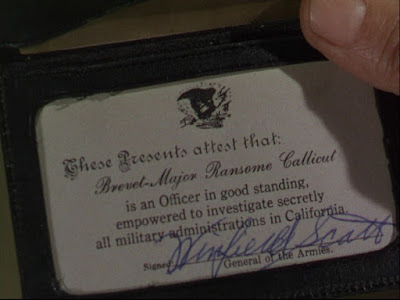