Edgar Buchanan with a derringer!


The movie is far from a major A-picture Western. It was directed by good old William Castle, famous for his gimmicky low-budget horror flicks, who did a few B-Westerns in his spare time. This was his second and he was to reach the dizzy heights of a couple of George Montgomery oaters, not to mention Jesse James vs. the Daltons and The Law vs. Billy the Kid in 1954 (mighty epics yet to be reviewed). 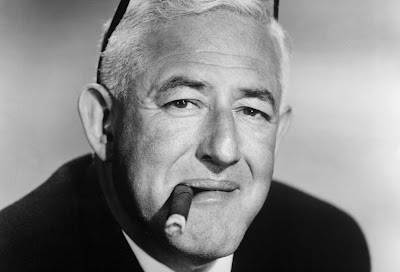 Castle, with signature cigar
But Cave does have its plus points. Edgar Buchanan, for one, as a wily old Wells, Fargo detective after the missing gold. And Victor Jory, for another, as the bad guy in a suit, obviously. Hugh O’Brian is a henchman, too. Best of all, in the very last reel Edgar saves the day by using a derringer he has secreted in his derby. Now, I love Edgar Buchanan and I love derringers. Both in the same Western is a treat indeed. So I couldn't give it less than three revolvers.

Edgar whips derringer from derby and does for Victor
It was actually Lee Marvin’s very first Western, uncredited as ‘train conductor stabbed in back’. He only lasts twenty seconds into the first reel but we all have to start somewhere. Lee had to wait for The Duel at Silver Creek the year after to actually get a credited role (a tiny part but he was still noticeably good). But Lee’s contribution to Cave of Outlaws was less than minimal, I fear, and this paragraph is only of historical interest to dyed-in-the-wool Westernistas. Oh, you too?

Lee drives the train, whistling cheerily, but then...
And the eponymous spelaean lair of the gang was filmed in the Carlsbad Caverns in New Mexico so there’s a low-rent National Geographic vibe to it. The picture was actually in color, quite an extravagance for Universal in ’51. In fact Universal didn’t stint (too much) on location shooting and used some talented cinematographers, in this case Irving Glassberg, whose best Western work was probably Bend of the River the following year.


Arizona Territory, 1880. Bandits hold up a train and get away with the US Mail pouches stuffed with gold. They are followed into their secret hideout by a posse led by Hugh Sanders. There they find a young boy, Pete Carver (Russ Tamblyn, 16, in his first Western, three years before Seven Brides for Seven Brothers). The sheriff slaps the boy about the face to find out where the gold is and in a rather sweet 1951 way this is masked from us viewers by a cave outcrop so we won’t have the trauma of seeing a child beaten. But the lad won’t tell where the gold is. Does he even know? Russ is the boy-outlaw
Fifteen years later and Russ has now grown and turned into Macdonald Carey, 38. He is released from the state pen and of course heads right off to the town of Copper Bend, the nearest burg to the cave, to recover, we presume, the gold. The whole town also presumes so, and extends him unlimited credit. Crafty Wells, Fargo ‘tec Edgar Buchanan is there waiting for him. He wants that gold back.


There’s a dame, natch. Liz Trent is trying to make a go of her missing husband’s newspaper and she beguiles Pete into using some of his credit to bankroll the paper. She is a recent widow, and the charming boss of the local copper business, who also owns half the town (Jory, obviously, in a role he was designed for) is wooing her. But we all know she’ll really fall for Pete. Liz is played by the rectangular-mouthed Alexis Smith, touted as “the dynamite girl”, not known for her Westerns though she had been Errol Flynn’s amour in both Montana the previous year and San Antonio five years before that. 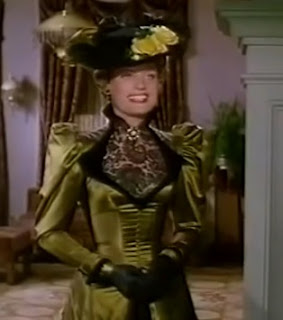 Alexis is the rather glam newspaper editor
Carey is a bit too gentlemanly and well-spoken for one just released from a fifteen-year stretch at hard labor. He seemed to be going for a James Stewart style. Of course Jimmy was hot cakes as far as Westerns went, having done both Broken Arrow and Winchester ’73 in 1950. 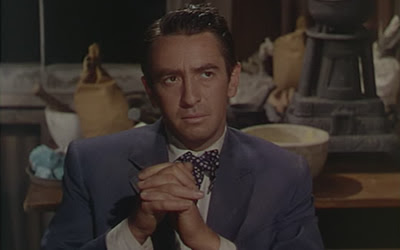 Going for the Jimmy Stewart vibe
Now and then Mr. Carey even bears a resemblance to a more recent actor, or I thought so anyway: 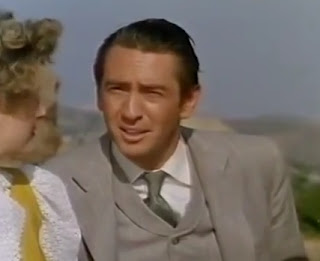 Nicolas Cage, anyone?
The Carey/Jory showdown is fought in Main Street, with Colt .45s, as was right and proper, but in a formal way, like a posh duel in Europe. It kind of peters out in stalemate, though.


Anyway, all the bad guys get their just deserts, no spoiler here, and Pete ‘n’ Liz walk off into the sunset headed for marital bliss and, we assume, a joint journalistic career.


It’s harmless fun and if a bit on the innocuous side is still worth a watch. You get Victory Jory being villainous and Edgar Buchanan with a derringer. A viewing would be worth it for that alone. And you could even try to spot Lee Marvin, though blink at the wrong time and you’ll miss him. 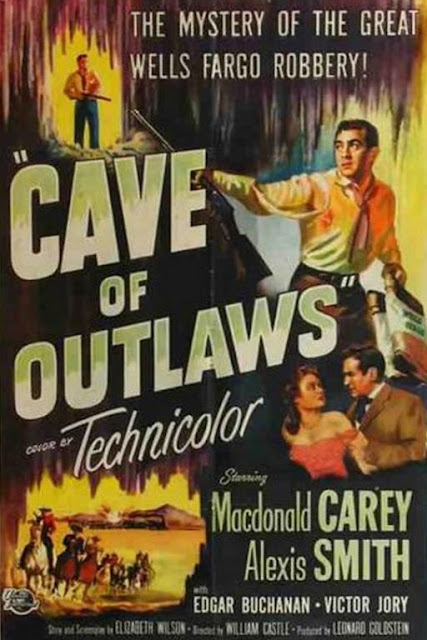