Bob bests the bad guys and gets the girl 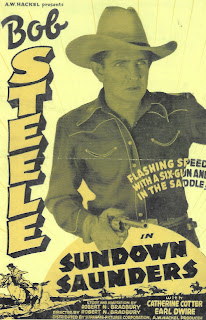 Sundown Saunders was a Bob Steele Western cooked up and directed by Bob’s dad, RN Bradbury. It’s a classic mid-30s one-hour programmer with all the proper ingredients. And Earl Dwire is the sheriff – hoorah!


Bob is extremely popular Bar X cowhand Sundown Saunders. The other cowboys practically applaud every time he appears. I wonder if he was related to Singin’ Sandy Saunders (John Wayne) from Riders of Destiny, or, come to that, Tex Saunders (Tex Ritter) from Heading for the Rio Grande or Wild Bill Saunders (Bill Elliott) from Pioneers of the Frontier or Blackie Saunders (Tom Tyler) from Riders of the Plains, or any of the other Saunderses. It was a mighty big clan. Or maybe he was related to The Sundown Kid (Don ‘Red’ Barry) in Two Gun Sheriff or Sundown Jim (John Kimbrough) or indeed Seven Ways from Sundown (Audie Murphy). But enough speculation on his family tree, unrecorded by the genealogists and not set down in Burke's Western Peerage, more's the pity.


It’s a normal skullduggery plot in which bad guy Taggart (stocky Ed Cassidy; baddy in a number of B-Westerns of the period) pretends to be a government agent and sells a ranch to gullible sheepherder Preston (Jack Rockwell, lantern-jawed brother of Charles Trowbridge, almost always a lawman but this time that job was taken by Earl so he was relegated to sheepman) and his fair but equally credulous daughter Bess (Marie Burton, aka Catherine Cotter, 33 B-movies including half a dozen Westerns 1932 – 39). 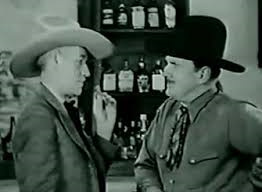 Sheriff Dwire chats to bad guy Cassidy in the saloon. Of course the lawman is on to him.
This ranch, though, actually belongs to Sundown Saunders! He’s awfully good about it, however, and doesn’t tell the girl and her pa to get off his place pronto. In fact he doesn’t even mention it’s his. Still, it doesn’t matter because we know he’s going to fall for Bess, and, indeed, vice-versa, so they’ll all live happily on the ranch together. And Mr. Preston says he’s going to sell his sheep and buy cattle, so that’s alright. You know how sheepmen are regarded in Westerns. Somewhere on the scale between axe-murderers and cannibals. 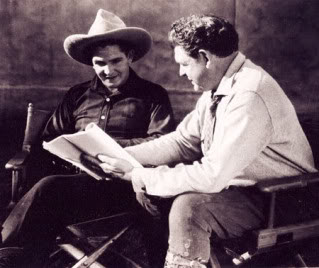 Bob Steele and his dad cooking up another oater
Sundown’s old-timer sidekick Smokey is good old Milburn Morante (billed here as Milt Morante) and he duly helps out. Lloyd Ingraham is the doc. He is involved in treating the various victims of GSWs inflicted by bad-guy Taggart (in the back) which include Mr. Preston, and he is persuaded to fake the death of Preston when it was only in fact a flesh wound. Cunning, huh. 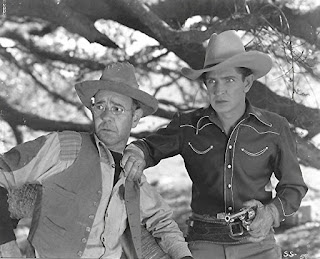 Milburn and Bob, pards
There’s much climbing in and out of hotel rooms and in the end Sheriff Dwire swears in the Bar X boys as deputies and they all gallop to the rescue like well-trained cavalry, wearing rather dashing white kerchiefs on their heads to distinguish them from the outlaws. It’s all gripping stuff. And you should see the nifty way Bob mounts up.


Bradbury knew a thing or two about short Westerns, as all those Monogram ones he did with John Wayne proved. They were pacey and full of action.


If you watch this one you won’t be bored. 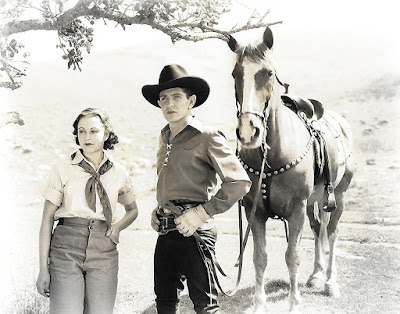 Of course he gets the girl